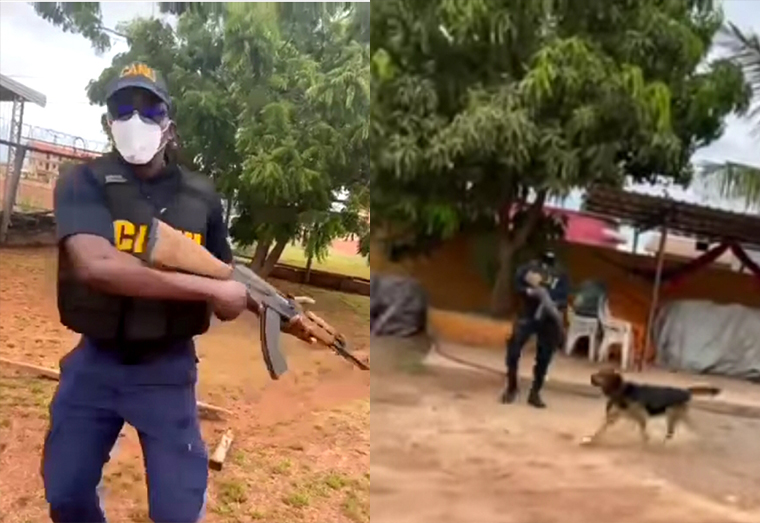 The Customs Anti Narcotics Unit (CANU) said in a release on Thursday night that it detained a Lethem businessman and seized a quantity of smuggled liquor during an operation in the community.

Lyndon Franklin was detained following an operation at his Tabatinga residence in which 30 Cases Blackstone Whiskey Liquor, 9 cases Blend Seven Whiskey and 4 cases of Skarloff Liquor were seized.

The entity said the suspect was seen entering Guyana from Brazil in his lorry and was followed and was subsequently seen emptying suspected smuggled and undeclared goods in his yard when GRA and CANU Officials intercepted him and uncovered the smuggled items among other goods packed in his truck. He is expected to be charged and placed before the Lethem Magistrate’s Court for breaches of the Customs Act.

The entity said it has received reports that  after being on the premises, the suspect’s dogs were released into the yard and allowed to advance towards its ranks. This, CANU said, resulted in an officer discharging a round to fend off the said threat after repeated requests to secure the animals.

However, CANU addressed the attitude of its ranks during the operation. It said it is “ holistically reviewing the incident to address the need for further training of its Ranks to ensure its Ranks are able to withstand civilian agitation and intimidations. Additionally, CANU is imploring civilians to desist from advancing to or attacking its Officials in any way whilst they are executing their duties.”

Fri Apr 16 , 2021
Support Village Voice News With a Donation of Your Choice. It is good to know there is an effort being made to begin large scale cultivation of corn and soya bean through a government-private partnership. For too long Guyana has had the reputation of having the ability to be the Breadbasket of the Caribbean but this ability has not yet […]