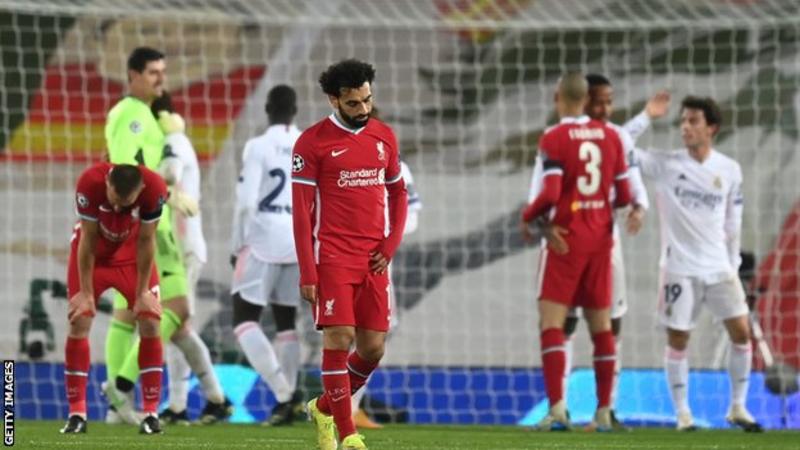 (BBC SPORT) Liverpool’s Champions League campaign ended in disappointment as Real Madrid set up a semi-final meeting with Chelsea by keeping Jurgen Klopp’s side at bay in a goalless draw at Anfield.

Real arrived at Anfield protecting a 3-1 lead from the first leg and while they eventually went through in relative comfort Liverpool will curse themselves for missing several glorious first-half chances.

Mohamed Salah shot straight at Real keeper Thibaut Courtois, who also saved well from James Milner, in the opening moments and shot over when he should have hit the target while Georginio Wijnaldum was also guilty of squandering an opportunity to at least apply pressure to Zinedine Zidane’s side.

Real’s best chance saw Benzema drive in a shot that was deflected on to the post, while Courtois was in action again to block Roberto Firmino’s angled shot after the break.

Liverpool ran out of steam and ideas as the second half wore on, and Real defended with defiance and resilience to seal the win and set up a meeting with another Premier League side in Thomas Tuchel’s Chelsea.

Liverpool were always fighting the odds as they trailed from the first leg but Klopp knew an early goal would have revived memories of previous Anfield comebacks in Europe – albeit they were in front of full houses rather than a deserted stadium.

And Liverpool have only themselves to blame because they certainly created those chances in the first half, the surprise being it was the normally reliable Salah who was guilty of two bad misses that could have rattled Real’s nerves.

Around 400 home fans gathered outside in an attempt to fashion some of the old atmosphere but sadly the only impact they made was to create more negative headlines with a disgraceful attack on the Real Madrid team coach that left the bus damaged. The Spanish giants received an apology from their opponents and Merseyside Police announced an investigation to find those responsible.

Liverpool gave it everything for the 90 minutes but it was the lack of cutting edge that has characterised so many of their Anfield displays this season that removed any hopes they had of turning this tie around and proved their undoing.

As time went on, Real grew more confident and comfortable, and the introduction of the likes of Diogo Jota and Thiago Alcantara, who was disappointing, could not shift the tie the hosts’ way. Klopp and his players must now lift themselves to chase a place in the Premier League’s top four to ensure they return to this competition next season.

The latest incarnation of Real Madrid under Zinedine Zidane is hardly a vintage version. Indeed for large portions of this Champions League quarter-final second leg they were careless and scrappy. However, they got the job done over two legs by showing their quality and threat at home then discipline and organisation at Anfield.

And this is the warning Chelsea must heed in the last four.

Real do not resemble their great predecessors but they still managed to overcome Liverpool – an injury-hit Liverpool it must be said – despite missing the twin defensive rocks Sergio Ramos and Raphael Varane, who they will hope to have back against Chelsea. And as Liverpool became increasingly desperate, so Real’s street-wisdom came to the fore to ensure a low-key and comfortable last 20 minutes with barely any serious alarms.

Chelsea will be well aware of the class of their former keeper Courtois, who excelled here, the enduring quality of Luka Modric and the battle-hardened, relentless striking ability of veteran Karim Benzema. Thomas Tuchel has no reason to fear Real but they will command his full respect and Zidane’s trademark has been finding a way to win the Champions League.

‘We rode the storm’ – what they said

Liverpool boss Jurgen Klopp talking to BT Sport: “You always need the key moments. We didn’t lose the tie tonight, we lost in Madrid. It was uncomfortable for Madrid. We were good, aggressive, had chances. We didn’t score and then the experience of Real Madrid played the tie down. That is ourselves this year with the finishing.

“We know how often Mo Salah finishes these things with closed eyes. Not here. Tonight it was absolutely OK, but we are out. “We love this competition and for other reasons it is very important we are back in it. We can now concentrate on the Premier League and we will. We have to work our socks off.”

Real Madrid boss Zinedine Zidane: “We were up against it and we knew we had to suffer tonight, but in the end we got what we wanted, which was to go through. I think we handled the game well, we rode the storm and can be proud of our display. “We knew they’d start fast and they were really good in the opening 15 minutes, but that’s normal. In the quarter-finals of the Champions League you have to dig in and we did that and got through.”

Thu Apr 15 , 2021
Support Village Voice News With a Donation of Your Choice. …as multiple COVID cases rock South Rupununi village  A one-month lockdown with a 6 pm to 6 am curfew has been implemented at the Deep South Rupununi village of Aishalton on Wednesday after 9 cases of the COVID-19 pandemic were recorded there. In addition , a suspected death was also […]