Kingston, Jamaica, Thursday, May 26, 2022– The European Union Delegation to Jamaica (EU) has once again reaffirmed its commitment to increasing public awareness around climate change and forest conservation with the launch of a new project focusing on participatory financial management for Jamaica’s forest sector. The €250,065 or J$41 million project which is titled ‘Participatory Budgeting and Financial Management for the Forest Sector in Jamaica’, was officially launched via Zoom on Thursday by the  Caribbean Natural Resources Institute (CANARI).

The institution will be implementing the two-year project alongside its co-executing partners, the Caribbean Coastal Area Management Foundation (C-CAM), and the Jamaica Conservation and Development Trust (JCDT).

The project targets Jamaican civil society organisations (CSOs) that have interests, rights, and responsibilities in forest research, conservation and management, including the co-management of forested protected areas.

Speaking at the virtual ceremony, CANARI Executive Director, Nicole Leotaud described the project as the first of its kind in the Caribbean.

“The idea of participatory budgeting and participatory financial management is completely new to the region so this innovative approach will set a precedent. As such, CANARI is very excited to be working with our partners in Jamaica including the CSO coalition for forests for this project. We also look forward to working with our Government stakeholders who will be integral in the implementation of this project. We hope that what we learn from this project will not only benefit Jamaica but also inspire other countries around the region,” she said.

The project is set to raise the public’s awareness of public finance management issues and ensure that civil society groups can play a role in the planning and delivery of the National Forest Management and Conservation Plan (NFMCP).

Head of the EU Delegation to Jamaica, Ambassador Marianne Van Steen said the project will aid in the implementation of the NFMCP.

“We hope that this project will enhance the capacity of civil societies to engage the Government regarding the budgetary planning and activation of Jamaica’s National Forest Management Conservation Plan. So the project’s push to develop a national civil society coalition is a step in that direction as it will foster knowledge exchange, advocacy and collective analysis for the country’s forestry sector,” she added, “we’re very happy to be working on this project and we look forward to seeing the results which can hopefully be used to improve future initiatives. ”

Meanwhile, the Forestry Department’s CEO and Conservator of Forests, Ainsley Henry said the project would bring greater governance, fiscal control and accountability to the country’s forest sector.  The three main target sites for the project are the Portland Bight Protected Area, the Blue and John Crow Mountain and the CockPit Country.

“Despite all the successes we have had in this sector, we recognize that some gaps remain so the delivery of this training by our partners will have a transformative impact on the local forest sector. We anticipate a sector that is more structured and accountable which will help it grow and make it more sustainable,” he noted.

“The Forestry Department remains committed to building and facilitating a forest sector that is not only a strong contributor to economic growth and job creation but is also an integral component in the lives of our citizens and is in line with our Climate Change goals as a nation,” he said.

The initiative is also positioned to assist the Government of Jamaica’s efforts to improve efficiency and effectiveness in resource use. The project will support recommendations outlined in the 2017 report on updating Jamaica’s Public Finance Management Reform Action Plan to increase public access to fiscal information.

The recent project launch is a part of the EU’s broader Integrated Forest Management Project in Jamaica, which was launched in March 2020 and has invested over J$277million to boost climate resilience in Jamaica’s Forestry sector.

Sat May 28 , 2022
Support Village Voice News With a Donation of Your Choice. This meeting is part of a series of business-to-business collaboration organised by the respective government agencies: Export Barbados and the Guyana Office for Investment (GO-Invest). The delegation which arrived in Barbados on Monday, 23rd of May 2022 includes 56 delegates who will be exhibiting their businesses at Agrofest 2022. Furthermore, […] 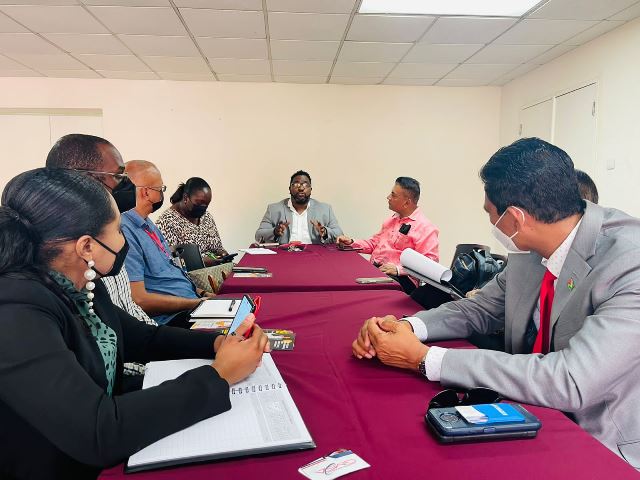