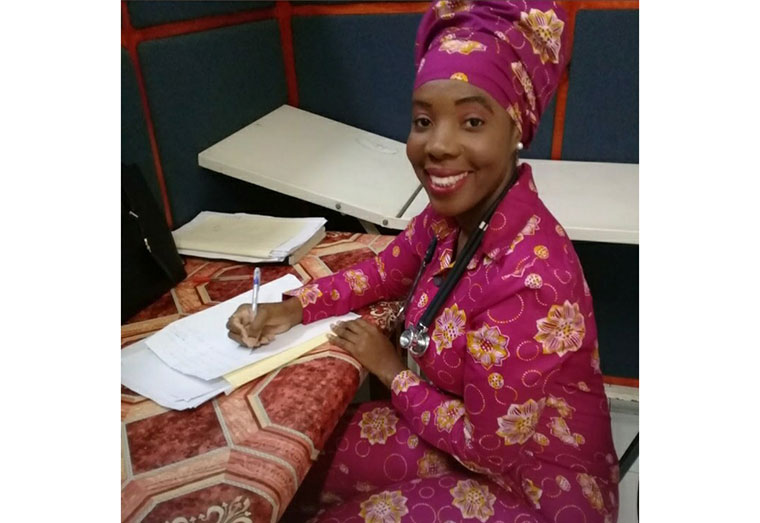 —Medical doctor claims discrimination at the hands of health officials

…begs for her release letter to pursue studies, work overseas

Confronted by a significant ‘cut’ in her salary by the Ministry of Health, Dr. Berysha Saskia Solomon, MD, MBA, said in an attempt to fill the void she became a security guard – a job she held for some five months in 2021.

Today, she fights a different battle – one involving her quest to secure her ‘release letter’ from the Government of Guyana so that, according to her, she can be freed of a world of racial discrimination. “That’s me last year when I had to work at Kalibur Security Services strictly night because the Permanent Secretary of the Ministry of Health was illegally deducting $45,000 a month from my salary for five months. From May 2021 to September 2021. All this while working as a doctor at West Demerara Regional Hospital during the day and was serving as the Vice Chairman on the Pesticide and Toxic Chemical Control Board, Ministry of Agriculture,” Dr. Solomon told the Village Voice Newspaper while referencing to a photo in her Kalibur Security Uniform.

The 31-year-old woman said today the struggle continues as she accused the Ministry of Health, Medical Council of Guyana and officials at the Georgetown Public Hospital Corporation (GPHC) of racially discriminating against her and stagnating the licensing process. Contacted on Friday, the Health Ministry declined to comment on the matter.

THE ROOT OF THE PROBLEM

According to Dr. Solomon, life as she knows it has never been easy but the situation deteriorated upon her return to Guyana in August 2015 after studying medicine in Cuba from 2009-2015. Upon completing her internship at the West Demerara Regional Hospital, Dr. Solomon graduated in July 2016, and began working with the Ministry of Public Health in November, 2016.

She recalled that it was during her internship at the West Demerara Regional Hospital that she and another doctor got into an argument on popular social media platform – Facebook.  Dr. Solomon said it was not until she received her institutional license from the Medical Council that the other doctor lodged a complaint with the Board.

According to a letter seen by the Village Voice Newspaper, the then Secretary of the Medical Council of Guyana wrote Dr. Solomon on December 14, 2016, asking her to appear before the Council for “professional misconduct.”

“The Medical Council of Guyana is in receipt of a complaint against you, from Dr. Shonnette Jack. You are invited to a meeting with the Council on Thursday 5th January at the Secretariat…” a section of the letter read.

Dr. Solomon reportedly appeared before the Council in January, 2017 in the company of her attorney. While she did not deny that there was an issue with the other doctor on Facebook, Dr. Solomon maintained that the issue had nothing to do with her work, and as such, there was no reason for the Medical Council to intervene.

“The issue didn’t happen at no hospital, it didn’t involve a patient, and so it has nothing to do with the Medical Council Board,” she told this newspaper. 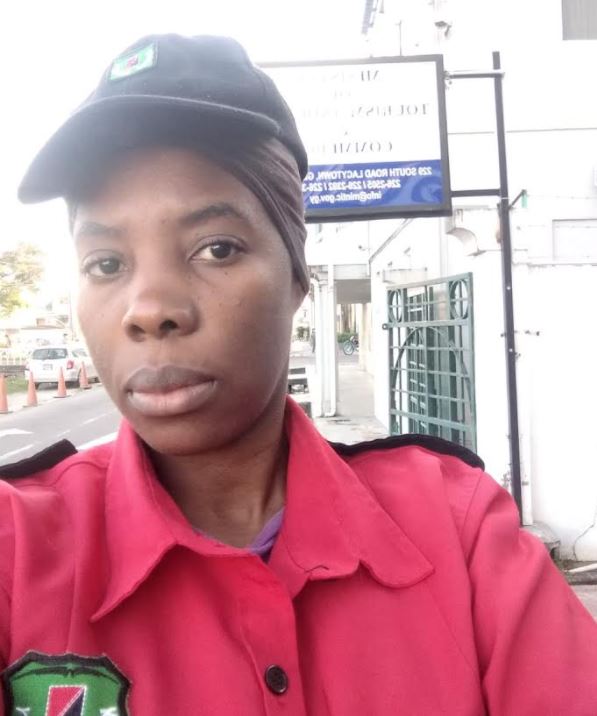 Dr. Solomon said since the complaint she has received a number of threats from Health Officials, though the matter is still pending.

It was explained that upon completing her 18 months of rotation within five departments at the Georgetown Public Hospital in May, 2018, she received a failed grade from the Head of the General Surgery Department. According to her, the doctor in charge, sat on the Medical Council, and was fully aware of the allegations laid against her.

“He victimized me because of the fake case against me. He never allowed the other doctors to give me any patients; I wasn’t allowed to do any minor surgery or anything, and in the end, he wanted to spin the narrative saying, that I didn’t want to work,” she contended.

Dr. Solomon said upon informing the then Chief Medical Officer, Dr. Shamdeo Persaud that she needed to redo General Surgery because of the failed grade, he reportedly told her that she would need to redo all five rotations though she had passed the other four.

The doctor began her rotations at the West Demerara Regional Hospital in January 2019 and successfully completed the programme in 2020.  Faced with more threats, the young mother and doctor said she bag to lean towards the People’s Progressive Party/Civic (PPP/C) during the controversial 2020 Elections.

“During the recount period, I would have made a lot of friends with a lot of people in the PPP Government, so I could save my job because I know once they take away your license, you cannot work, and I would have been left stuck in the system; no job, nothing to do,” Dr. Solomon said.  She said while she managed to renew her institutional license in January, 2020, she had difficulties doing so in 2021 but nevertheless got through.

“Well the Government had already appointed me to be a Board of Director on the Pesticide and Toxic Chemical Control Board – so they had no choice than to renew the license, and it would have expired 2021 December,” she explained.

By September, 2021, Dr. Solomon was transferred to GPHC, however, according to her no replacement letter was issued, and therefore, she could not have commenced duty.

“I was back and forth between the Director’s Office of Regional Health Service, the Permanent Secretary Office, and the Human Resource Department at Ministry, begging them for the placement letter. I called GPHC in September, and they said there was no placement letter there for me?” she said.

According to Dr. Solomon, the hospital’s administration promised to inform her once in receipt of the letter but that was never done.

It was not until January 2022, that Dr. Solomon was informed GPHC had the placement letter since September 2021, and had indicated to the Health Ministry in November that she had not showed up for work. Dr. Solomon questioned why the Health Ministry waited until January to inform her of GPHC’s complaint, maintaining that it was no fault of hers. By February, 2022 her salary was blocked.

Dr. Solomon was keen on pointing out that in November, 2021 she became critical of Government following the announcement that public servants would get a 7% increase.

“…I made a comment saying all these uneducated government ministers should shut their mouth and allow educated public servants to express themselves about the 7%,” the doctor recalled. Dr. Solomon said though she was appointed to serve a second term on the Pesticide and Toxic Chemical Control Board in October 2021, by the end of November, she was “kicked off” the Board.

Dr. Solomon said despite of the many challenges, she opted to pursue International Relations at the University of the West Indies, St. Augustine Campus in September 2021 with the hope that 2021 would have been the end of her contractual agreement with the Government, however, much to her surprise she was inform that she has two months outstanding, and as such cannot receive her full registration to practice medicine nor her release letter. According to her, there is no movement to provide her with the release letter, which would allow her to travel beyond the shores of Guyana. “I need my release letter so I can migrate out of Guyana and flee the government because the government is the one targeting me,” Dr. Solomon said while noting that she is suffering from depression due to the ongoing dispute. Dr. Solomon has not only written a number of senior government officials on the matter but also the Prime Minister of Barbados, Mia Mottley seeking help.

Sun May 8 , 2022
Support Village Voice News With a Donation of Your Choice. —-security minister seeks info after revelation by former police officer   Amid a spike in gun crimes and with the police seizing some 32 illegal weapons thus far for the year, Retired Assistant Commissioner of Police and former member of the Police Service Commission, Clinton Conway said there is a flourishing […] 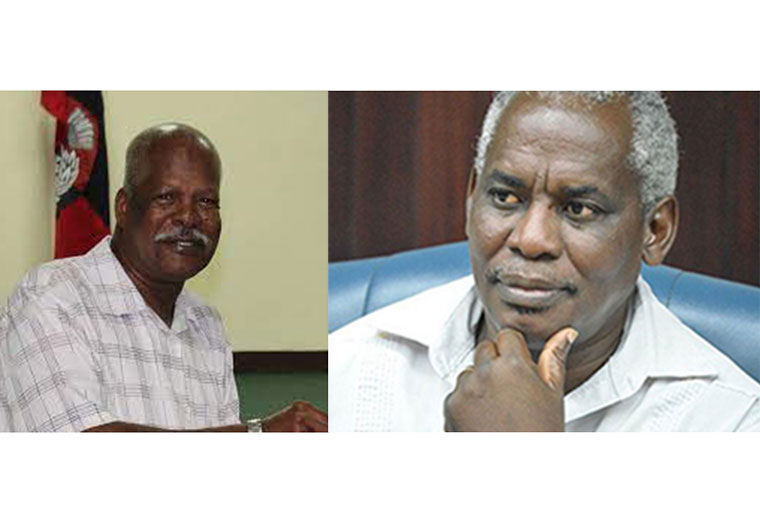