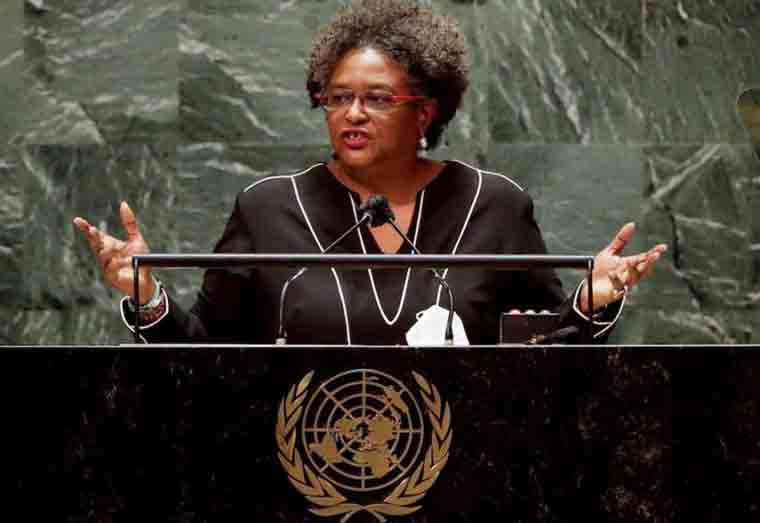 (BARBADOS TODAY) Prime Minister Mia Mottley makes no apologies for increasing taxes on soft drinks and sweetened beverages and acknowledges that the unhealthy lifestyles of many Barbadians are leading to a prevalence of non-communicable diseases (NCDs).

Urging Barbadians to do better, Mottley said even though Government was playing its part by expanding its range of services to provide better healthcare, people were still engaging in unhealthy practices that were putting their lives at risk. The prime minister’s comments came following a tour of the Maria Holder Diabetes Centre for the Caribbean in Warrens this morning. Making it clear she had no regrets about increasing taxes on the sweetened beverages in last month’s Budget, the Prime Minister said the prevalence of NCDs and other illnesses were taking a toll on Government’s resources.

“I want to use this opportunity to speak to our people, to Barbadians, because the rate of increase in expenditure for dialysis, and as a result of the loss of productivity, for chronic NCDs has forced me in this Government to have a minister who has direct day-to-day responsibility for chronic NCDs and the QEH – Dr Sonia Browne. I have done that because I am not satisfied that we are reaching as many of our people and therefore, I have asked Minister Browne and Minister Ian Gooding-Edghill to designate some champions who will help us with the change in public behavior.

“This Government, as will future governments, wants to keep Barbadians well, but we need the help of Barbadians to keep Barbadians well. We recognize that our school system and our public information to date as an independent country did not teach people sufficiently how to eat and what to eat. If I doubted the correctness of my action in the Budget last month about putting the additional taxes on soft drinks and sweetened beverages I do not doubt it now and I do not apologize for it,” Mottley said.

Mottley said plans were in the works to significantly upgrade polyclinics across the island and to use more telemedicine. Additionally, she is hopeful that ground for the new Geriatric Hospital in the National Botanical Gardens would be broken later this year.

Director-General of the World Health Organisation (WHO), Dr Tedros Ghebreyesus, lauded Government for the role it was playing in looking after the health of its citizens. “Your commitment to alleviating poverty and improving the quality of life of Barbados’ population through a comprehensive approach is an inspiring model from which other countries can learn. We support your vision to expand this approach to other countries in the region through your collaboration with PAHO and WHO,” Dr Ghebreyesus noted.

He said he was especially pleased with Government’s commitment to pay the fees for dialysis patients, which he said cost around $300 per session. He said dialysis patients usually required three sessions per week. Dr Ghebreyesus said without Government’s assistance most persons would not be able to afford the life-saving treatment. Meanwhile, Christopher Holder, the son of Maria Holder, revealed that 1252 patients attended the centre in 2021 and 756 patients had so far attended in 2022. He acknowledged that he would like to see more patients being referred there from polyclinics and doctors. Holder said there was also the need for more podiatrists on the island.

Give Thanks to Robert Corbin

Sun May 1 , 2022
Support Village Voice News With a Donation of Your Choice. It is difficult to accurately predict political behavior. What is true for fifty years could change in a day. Guyana’s recent elections have proven the validity of that formulation. All of us got it wrong, even if we got some parts right. The narrow victory by the APNU+AFC Coalition at […]