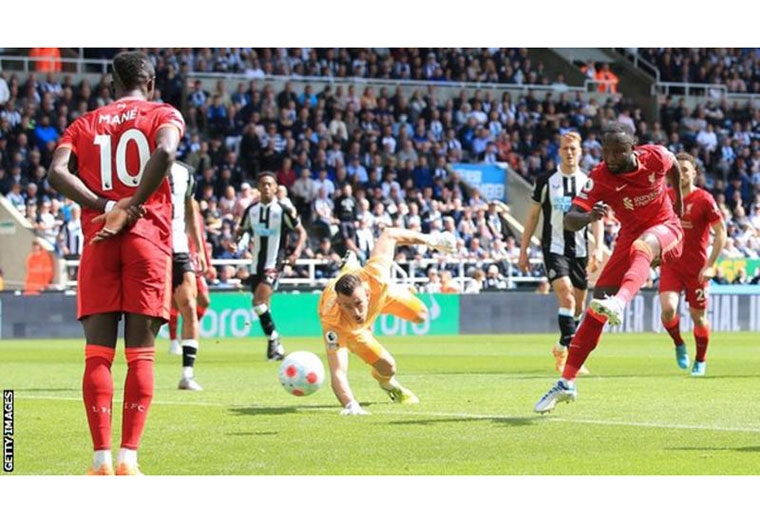 (BBC SPORT) Liverpool kept themselves firmly in the fight for the quadruple as they overcame a spirited Newcastle to keep up the pressure on Premier League leaders Manchester City.

Jurgen Klopp made five changes at St James’ Park, including leaving top scorer Mohamed Salah on the bench, after the Champions League semi-final on Wednesday.

It looked like it would backfire as in-form Newcastle started strongly, pressing Liverpool high and forcing them into a couple of early mistakes. But Liverpool grew into the game and were dominating possession when Naby Keita struck in the 19th minute.

The midfielder showed great composure as he dribbled across the box and past Martin Dubravka before slotting into the net. Sadio Mane should have made it 2-0 before the break when his shot on the counter was too close to Dubravka, who also made a fine save from a Diogo Jota header. The Newcastle fans, who were aggrieved that play continued in the lead-up to Liverpool’s goal because Fabian Schar was down injured, thought Miguel Almiron had equalised after rounding Alisson, only for the effort was ruled out for offside.

The hosts also made a lively start to the second half, although Liverpool went closest to adding a second with Mane shooting wide from close range before Jota’s shot was pushed over. It was not a vintage Liverpool display, but they got the job done and they are second, one point behind Manchester City, who won at Leeds later on Saturday to reclaim top spot after a brief spell in first place for the Reds.

The Liverpool line-up may have intrigued City boss Pep Guardiola, who, while focused on his own side’s pursuit of a treble, will no doubt welcome any helping hand in denting his rivals’ title bid. Thiago – excellent in the 2-0 Champions League semi-final win against Villarreal in midweek – was on the bench alongside Salah and Trent Alexander-Arnold. It could have been seen as a big risk, but instead it emphasised the incredible strength in depth in this Liverpool squad. James Milner came in and was his dependable self, providing experience in midfield, while Joe Gomez was solid at right-back and the front three of Luis Diaz, Jota and Mane caused as many problems as any of the attacking combinations Liverpool could field.

When Newcastle pressed for an equaliser in the closing stages, Liverpool were able to send on Thiago, Salah and Fabinho to see the game out. Against a side who had won their previous six home games, Liverpool fans had a right to feel apprehensive, but the Reds overcame a big hurdle that serves only to strengthen the feeling that they will end this season with multiple trophies.

Only Liverpool and City boast a better record in 2022 than Newcastle and there was understandably a buoyant mood among the home fans before kick-off.

The match provided Newcastle with an opportunity to show what sort of threat they pose to teams at the top end of the table – and they certainly gave a good account of themselves. They started superbly, getting at Liverpool from the outset and making their opponents nervous. Although Newcastle could not maintain their high-tempo start, there was still a sense of pride at St James’ Park at the fight shown against one of the best sides in Europe.

Sun May 1 , 2022
Support Village Voice News With a Donation of Your Choice. DES MOINES, Iowa (AP) — A Colorado prison inmate has become the first person in the U.S. to test positive for bird flu in a recent outbreak that has led to the deaths of millions of chickens and turkeys, but federal officials say they still see little threat to the […] 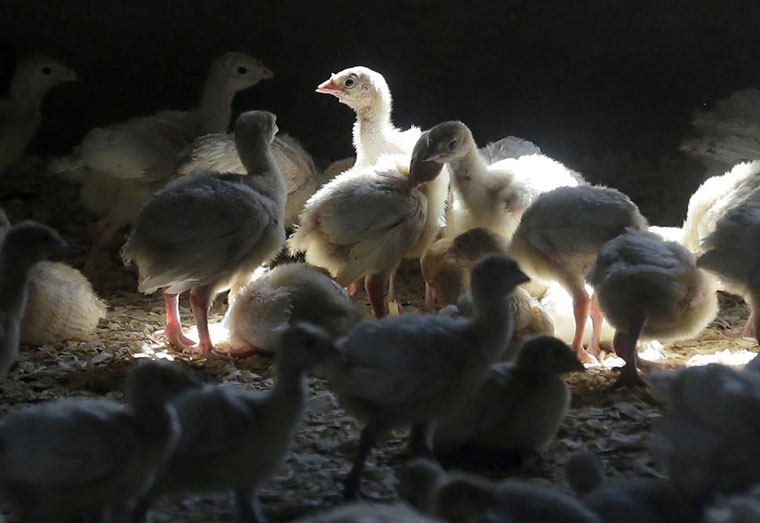