Mexican diplomat Alicia Bárcena concluded her mandate as Executive Secretary of the Economic Commission for Latin America and the Caribbean (ECLAC) today, after nearly 14 years of stewardship characterized by the hallmark of equality and its key impact on countries’ development processes and human progress.

“Today I conclude this fruitful cycle as the highest authority of ECLAC. This has been the brightest phase of my professional career. For nearly 14 years, I have contributed to giving weight, influence and opportunity to the body of transformative, progressive and egalitarian convictions that distinguish ECLAC’s present thinking,” Alicia Bárcena affirmed during a ceremony held in her honor, which took place as a hybrid event from the regional commission’s central headquarters in Santiago, Chile.

Alicia Bárcena took office as ECLAC’s highest authority on July 1, 2008. She was appointed to this position by then United Nations Secretary-General Ban Ki-moon, becoming the first woman to hold the post. She led the work of the Commission as a center of excellence and research applied to public policies on sustainable development, a forum for regional intergovernmental and multi-stakeholder dialogue on sustainable development, and a provider of technical cooperation to countries.

Since assuming the position of Executive Secretary of ECLAC, and emphasizing the organization’s historical structuralist thinking, Bárcena has stressed the central role of equality for strengthening a development pattern that would combine economic growth, social inclusion and environmental sustainability. This focus has been enshrined in the main documents corresponding to the Commission’s last six sessions: Time for Equality: Closing Gaps, Opening Trails (2010), Structural Change for Equality: An Integrated Approach to Development (2012), Compacts for Equality: Towards a Sustainable Future (2014), Horizons 2030: Equality at the Centre of Sustainable Development (2016), The Inefficiency of Inequality (2018) and Building a New Future: Transformative Recovery with Equality and Sustainability (2020). Although they form a unit (centered on equality), these six documents are well differentiated and complement each other. As a whole, they concern the defense of the rights of citizens, of a welfare state and of significant improvements to income distribution, based on a continual increase in productivity, by means of the virtuous combination of a macroeconomy for development and policies for a transformation in production and exports, respecting environmental sustainability. They also stress the importance of renewed multilateralism and the attainment of regional integration, which has proven to be so elusive.

During her administration, Alicia Bárcena guided a prolific period in which ECLAC’s way of thinking was consolidated, with a set of progressive ideas for the region that seeks to overcome the structural obstacles that have hindered deep democratic advances and the material and cultural progress of Latin America and the Caribbean.

In the words of UN Secretary-General António Guterres, Alicia Bárcena “led a progressive and visionary administration. She was one of the first at the UN to position equality in its multiple manifestations, including gender equality, as the cornerstone of sustainable development and to highlight the specific challenges of middle-income countries.”

Among the many initiatives that make up her legacy, five in particular stand out: the Comprehensive Development Plan for El Salvador, Guatemala, Honduras and south-southeast Mexico, as a bid to address the structural causes of migration; the Plan for Self-Sufficiency in Health Matters in Latin America and the Caribbean, which seeks to strengthen the capacities for research, development, production and access to vaccines and medicines throughout the region, with emphasis on actions to promote regional integration; the Caribbean First initiative, a strategy that aims to reappraise and strengthen the Caribbean’s place as a fundamental part of our region and to expand opportunities for integration and cooperation; financing for development along a regional dimension; and the Regional Agreement on Access to Information, Public Participation and Justice in Environmental Matters in Latin America and the Caribbean (Escazú Agreement), an unprecedented treaty that seeks to ensure a healthy environment and sustainable development for present and future generations through societies that are better informed and more participatory, fair and inclusive.

In accordance with the UN Secretary-General’s decision, as of April 1, 2022, Bárcena will be succeeded in her post on an interim basis by Argentine economist Mario Cimoli, who has served as Deputy Executive Secretary of ECLAC since 2018. “The current role and weight of ECLAC, the value and importance of its voice, the influence and impact of its ideas, although many times have had me as their spokeswoman, are the fruit of the often anonymous work of the women and men that make up the Commission. ECLAC has truly been, for us, the fertile territory of shared convictions. The tool conducive to giving concrete shape to our shared quest for dignity, justice and equality,” Alicia Bárcena concluded.

Pic save as eclac lady

Board approves major reforms for IDB

Sun Apr 3 , 2022
Support Village Voice News With a Donation of Your Choice. —business arm to lend more to support women, education justice WASHINGTON – The Boards of Governors of the Inter-American Development Bank (IDB) and IDB Invest last week approved a roadmap for a series of institutional reforms for the IDB and mandated a proposal for a capital increase for IDB Invest, […] 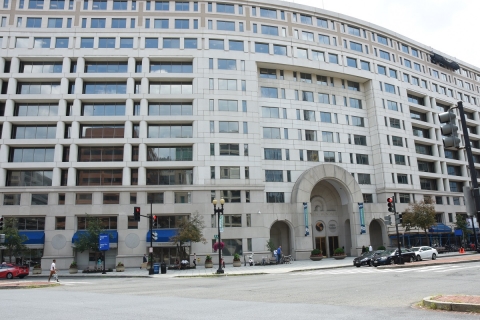