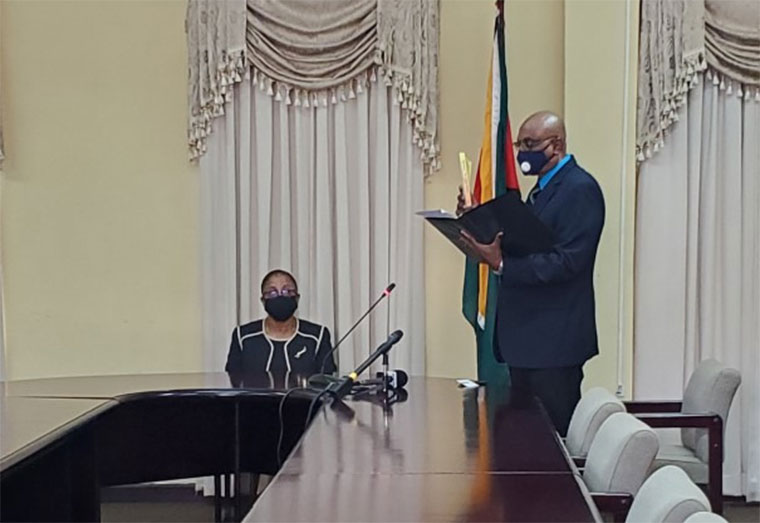 —Newly appointed GECOM CEO Vishnu Persaud promises to be professional
Noting that he holds no grudge against those who opted not to renew his contract as the Deputy Chief Elections Officer (DCEO) back in 2017, Vishnu Persaud, the country’s newly appointed Chief Elections Officer (CEO), said he will execute his functions with much professionalism, in accordance with the Electoral Laws and the policies of the Guyana Elections Commission (GECOM).
“Nobody has to have any worry about my neutrality or that I may deviate from the path of what is lawful and proper,” Persaud told reporters, shortly after taking his oath as Commissioner of Registration before Chief Justice Roxane George at the High Court on Tuesday. He had also appeared before Chief Magistrate Ann McLennan at the Georgetown Magistrates’ Court where he took his oath as Chief Elections Officer.
Persaud’s appointment comes amid serious concerns by the Opposition-aligned Elections Commissioners – Vincent Alexander, Charles Corbin and Desmond Trotman – that he lacks he requisite experience and skills in Management and Electoral Management as required by the Commission, but, on Tuesday he brushed those concerns aside.
Alluding to a statement issued last Friday by Chairman of the Elections Commission, Justice (Ret’d) Claudette Singh, Persaud said he has the experience required.

“I have accumulated in excess of 10 years at the managerial level…,” he said in response to a question posed by Village Voice News.
In defending her decision to appoint Persaud, Chief Elections Officer, Justice (Ret’d) Singh said based on the arguments put forward by the Commissioners and an endorsement by the former GECOM Chairman, Dr. Steve Surujbally, it is her belief that Persaud has the requisite institutional knowledge to manage Elections in Guyana having worked at GECOM for 17 years.
Persaud was first appointed in 2001 as the Public Relations Officer (PRO). In 2014, he was appointed substantive DCEO, however, when his contract expired in August 2017, it was not renewed, though efforts were made to do so.
He told reporters, he holds no grudge.

“I have not taken disappointment, bringing any of those stuff with me, I carry no grudge, I hold no malice,” he said.
Having been appointed the substantive CEO, Persaud said he is ready to work, and will carry out an assessment of ongoing projects and programmes as well as those in the pipeline as he charts the way forward with guidance from the Commission.
“In terms of the bigger picture, I will have to be guided and advised by the Commission, and this has mostly to do with things like registration and preparations for elections. I don’t know what the thinking of the Commission is at this time, so I will have to be guided,” he said.

Tue Dec 14 , 2021
Support Village Voice News With a Donation of Your Choice. Three more lucky GTT customers have won big prizes from the company’s Opt in & win e-billing campaign. Randy Ramsaroop from Diamond, Nadira Gangapersaud from Gordon Street, Kitty and Carol Carmichael from Berbice were announced the winners on the company’s social media page on December 14, 2021. Ramsaroop and Gangapersaud […]