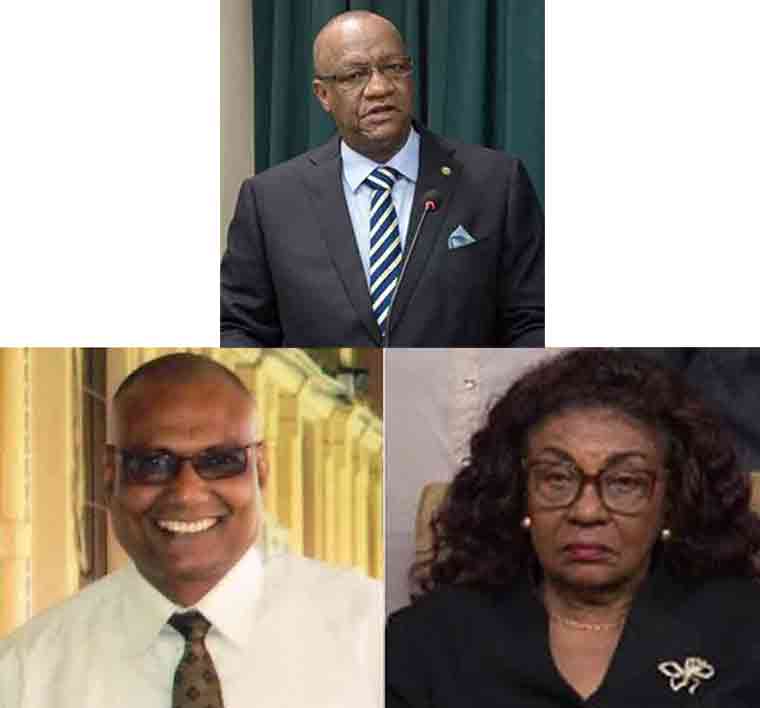 Opposition Leader has flayed Chairman of the Guyana Elections Commission for her justification in casting her vote with the PPP-nominated commissioners to appoint Vishnu Persaud as the new Chief Elections Officer.

Harmon said the Chairman has ignored the requirements set out by the Commission itself for the position and has based her decision to support the hiring of Persaud on his knowledge of the Commission’s operations and the ten regions of Guyana.

“If working at GECOM for some years and knowing the geography of Guyana, Guyana’s ten administrative regions, were the pre-requisites for this position, then GECOM should have said so publicly. The Chairman of GECOM yet again shifted the goal post and changed the rules of the game to suit the People’s Progressive Party. The Chairman of GECOM has shown that she cannot be impartial and is willing to continue to use her position to further place the entire Commission into a tenuous position. Guyanese confidence in GECOM has been struck another blow by this political decision by the Chairman of the Elections Commission”, Harmon said in a statement Friday evening.

He said the APNU+AFC Coalition disapproves of the hiring of Vishnu Persaud for the post. The Opposition Leader said, “in the circumstance, we wish to put on notice that Mr. Persaud in the performance of his duties, will be held to the standards of fairness, non-partisan, unbiased and transparent decision making”.

In defending her decision to appoint Persaud Singh said based on the arguments put forward by the Commissioners and an endorsement by the former Chairman, Dr. Steve Surujbally, it is her belief that Persaud has the requisite institutional knowledge to manage Elections in Guyana having worked at GECOM for 17 years. “During his tenure at the Commission, Mr. Persaud held the post of Public Relations Officer, Deputy Chief Election Officer for three (3) years, and acted as Chief Election Officer on several occasions,” Justice Singh said in a statement on Friday.

According to her, Persaud is knowledgeable not only with the understanding and management of the work of the CEO’s office and the operational functions of the Secretariat but also with the geography of Guyana’s ten (10) Administrative Regions.

Given the reasons cited, Justice Singh said she has no hesitation in endorsing Persaud’s appointment since he has the necessary skills, experience, and expertise that makes him eminently qualified to handle the job.

Persaud is expected to assume office in the new week; once all contractual and procedural matters are finalised and he is officially appointed and takes the Oath of Office. “The Commission is hopeful that with his extensive experience in the agency, Mr. Persaud will execute the functions of the office of Chief Election Officer and Commissioner of Registration within the confines of the law and deliver with excellence,” the Public Relations Officer (PRO) Yolanda Ward said.

The decision to appoint Persaud was arrived at on Friday via majority vote. He was one of two candidates interviewed for the position – the other being Jamaica Leslie Harrow, who was shortlisted by both the Government and Opposition nominated Commissioners. Persaud only had the support of the Government, and now, the GECOM Chair. Throughout the process, the Elections Commissioners were divided on whether Persaud had reached the criteria set out by the Elections Commission for the Chief Elections Officer (CEO) post. Though Persaud worked at GECOM’s Secretariat for well over 10 years, for the majority of that period he served as the Public Relations Officer (PRO).

Sun Dec 12 , 2021
Support Village Voice News With a Donation of Your Choice. —police recover Glock Pistol, ammo A Buxton man was early Saturday morning arrested along with two women after the man had fired a shot a woman, police have said. The incident occurred at Company Road Buxton East Coast Demerara. The is a 31-year-old male, who is in custody. In a […]