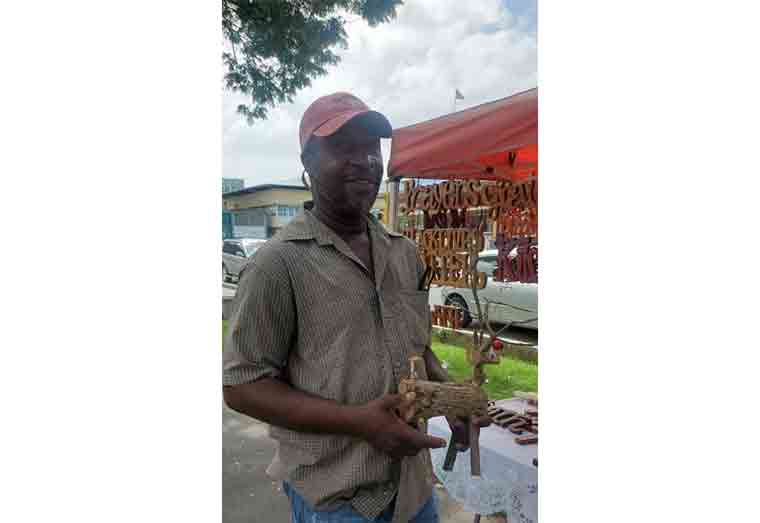 Sitting beneath his canopy tent, carving his next work of art, local Artist, Stephen McKenzie remains hopeful that one day, the Main Street Avenue, in part or whole, would be transformed into a permanent art village, depicting Guyana’s rich history, culture and cuisine.

“I would like to see the Avenue transformed into an Art Village, not only with Visual Arts but you can have Music and Culinary Arts right here on the Avenue,” McKenzie told the Village Voice Newspaper.

It is from the Main Street Avenue that he along with a small number of other artists showcase their handcrafted pieces from wooden carvings and paintings to beaded jewellery with the hope of captivating the eyes of Guyanese and tourists, enough to make more than just a single sale. For McKenzie, he brings words to life through his wooden carvings.

“These are mainly decorative pieces to decorate your home and offices, and also put certain words in your home to remind you, maybe as you are leaving, that you should be inspired or that you should be grateful,” McKenzie explained as he pointed to his wooden collection on display.

Those well carved wooden words and phrases include ‘inspire yourself,’ ‘faith,’ ‘beautiful,’ ‘family,’ ‘I love Guyana,’ and ‘Black Lives Matter.” The pieces, McKenzie said, are very affordable, with prices as low as $4,000.

McKenzie said the Art Village is just one way in which the Government together with the Private Sector can enhance the Arts in Guyana.

He noted that the Private Sector, would often include artists in their pop shops and mini exhibitions paving the way for much needed sales. But he believes much more can be done, positing that financial endowments from both Government and the Private Sector can go a far way.

“We need an even bigger input from the Government. They can give us endowments so we can survive and live comfortable as artists because as you know with artists we always struggle. It is always a struggle,” McKenzie told the Village Voice Newspaper.

McKenzie developed his love for art as a child while watching his dad, who was a blacksmith, work. With age and time, his passion for the arts grew even stronger.

“I had just loved drawing and making stuff,” he said.

In 1986, McKenzie joined the Burrowes School of Art where he acquired a Diploma in Art, having graduated in 1991. By 2003, he graduated from the University of Guyana with a Degree in Fine Arts.

“At Burrowes School of Art, I specialized in ceramics, that’s pottery; making clay pots, and plates and jars and so on,” he shared.

However, it was through a friend, who now teaches in Botswana, that he learnt the art of sculpture.

“He was doing sculpture and at the end of it, we said we are going to teach each other our disciplines, so I taught him ceramics and he is now teaching that over in Botswana and I am doing wooden stuff,” he said.

McKenzie, a father of three, was among the 2019 Guyana Visual Arts Competition and Exhibition (GVACE) winners.

Sun Dec 5 , 2021
Support Village Voice News With a Donation of Your Choice. Police ranks of in the Upper Berbice River on Saturday conducted an eradication exercise in the vicinity of Fort Nassau village during which two makeshift camps and two cannabis fields covering about four acres of land were discovered. The fields consisted of twenty-five thousand cannabis plants ranging from five inches […]