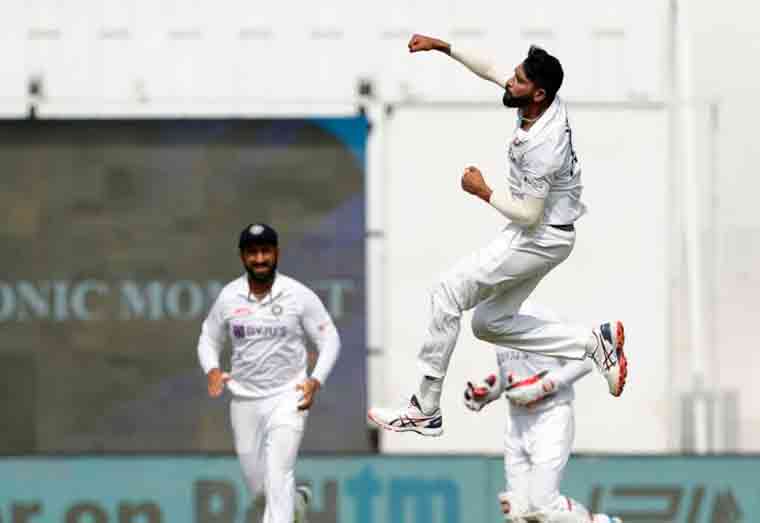 (CRICINFO) Ajaz Patel made history in a stirring show for New Zealand. Then he watched New Zealand’s batters also make history, of the kind that stirred rather different emotions. Ajaz joined Jim Laker and Anil Kumble as one of only three men who had taken all ten wickets in a Test innings, becoming the first one to do so in an away game.

He also faces the prospect of becoming the only bowler of those three whose feat came in a losing cause, with India having amassed a lead that’s quickly becoming out-of-sight for New Zealand.

Ajaz’s indefatigable 10 for 119 in 47.5 overs had kept India to 325 all out in their first innings, but that looked north of gargantuan when New Zealand began their reply. They were shot out for 62 in just 28.1 overs, and Virat Kohli opted to give his batters time in the middle so didn’t enforce the follow-on. At stumps on the second day, India were 69 without loss, a lead of 332 and beyond the possibility of anything other than victory.

Ajaz got into the record books but the only thing that went wrong for India was Shubman Gill copping a blow to his right elbow while fielding close in, and therefore not coming out to open. Mayank Agarwal was instead accompanied by Cheteshwar Pujara. They dealt with a ground down New Zealand attack confidently in the 21 overs they batted, with Pujara moving to 29 and Agarwal on 38.

Agarwal looked like he was merely picking up from where he left off in the first innings, as indeed he was because New Zealand’s innings was done and dusted in a couple of hours. Agarwal’s 150 was the foundation around which India’s first-innings total was built, an innings of impressive range and temperament.

In its way, it was as valuable to India as Ajaz’s 10-fer. Ajaz had regular periods of wrecking mayhem at the other end, but Agarwal continued serenely on. He took on the spinners – including Ajaz – particularly whenever he spotted an opportunity, and showed sound judgement of when to leave the ball as well as excellent patience and shot-selection.

Ajaz had begun the day by sending India from a strong 221 for 4 to a wobbly 224 for 6 in the second over, taking out Wriddhiman Saha and R Ashwin off successive balls. The Ashwin dismissal came via a peach, beating his forward defensive with drift, dip and turn to hit off-stump. The space available to beat bat as well as hit stump was so minute, Ashwin didn’t realise he had been bowled and signalled for a review thinking he was caught behind, before he looked back and had to walk off.

India rebuilt from there through a 67-run stand with Axar Patel proving a valuable ally for Agarwal, showing equal patience and great strength square of the wicket and off his legs when the bowlers erred. Ajaz apart, those errors arrived more frequently than captain Tom Latham would have liked.

India were steady on 285 for 6 at lunch, but the Ajaz show resumed soon after. He showed his skill in getting a well-set Agarwal to follow the ball with his hands because of the length and the sharp turn to feather a catch behind, and had taken all eight wickets to fall when he was confronted with the bottom three batters.

The returning Jayant Yadav’s calculated gamble to take him on backfired when he holed out to long-off, and the record books had a new addition when Mohammed Siraj’s slog across the line was sliced up in the air for a catch to mid-off. The ball swirled and hung in the air for a second, a second that seemed a lot longer than it was as history held its breath, until Rachin Ravindra’s safe hands closed around it.

Ajaz had achieved his remarkable feat in Mumbai, the city of his birth, but he would have barely had the time to savour the moment, the pumping fists and roars as the New Zealand team enveloped him in a group bear hug, when he was faced with the prospect of his achievement being sidelined as New Zealand’s batting crumbled.

Siraj was on fire, and every ball that was on target asked searching questions off New Zealand. Will Young nicked off to slip when one straightened, Latham was caught at deep square leg when he couldn’t control his pull shot to a wicket bouncer, and Ross Taylor fell to a ball that rivalled Ajaz’s to Ashwin for ‘ball of the day’ honours, angling in on off and straightening to knock out off-stump. Ashwin, who seemed to have the ball on a string, struck with his first ball, while Axar and Jayant also had a share of the spoils.

The only man who remained not out was Ajaz. He had got every wicket on offer, and didn’t let India get his. It was that kind of day for him. But New Zealand’s chances in this game began and ended with him, and with nothing forthcoming from either his bowlers or his batters, they are facing an abyss from which it seems impossible to climb out of.

Sun Dec 5 , 2021
Support Village Voice News With a Donation of Your Choice. —after beating Watford 3:1 (BBC SPORT) Reigning champions Manchester City moved top of the Premier League for the first time this season with a dominant win over struggling Watford. Raheem Sterling headed City ahead after only four minutes, when free at the back post to meet Phil Foden’s excellent cross […]