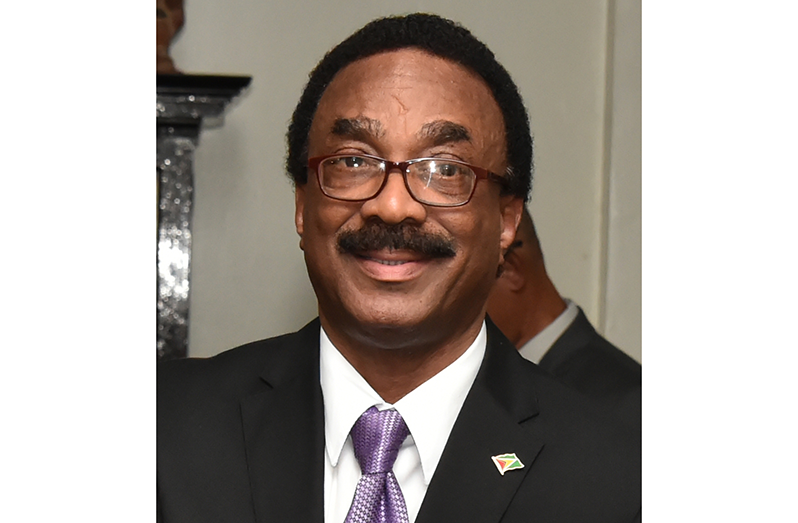 Immediate past chairman of the PNCR and former Attorney General, Basil Williams has accepted the nominations for leader of the party, insisting that he has a rich legacy of service, which makes him qualified for the post.
“I thank you, my members for the confidence you have reposed in me by nominating me for inter alia the highest office in this great party of ours, the People’s National Congress Reform (PNCR)” Williams said in a statement on Saturday.
The PNCR’s congress to elect leaders is billed for December 11. He is one of seven persons nominated for the top post. Among them are: Joseph Harmon, Aubrey Norton, Dr Richard Van-West Charles, Carl Greenidge and Sharma Solomon.

“I had said from the outset that if nominated I would then consider whether the circumstances allow for me to contest.

No doubt it is because you know Basil Williams SC has been your servant/leader over the last twenty (20) years going where all others feared to tread. I was upfront and centre in combating the oppression of the PPPC and helping to lead us to victory in 2015 to become the government of the Cooperative Republic of Guyana,” Williams said in his statement..

He said he has noted the impact Covid-19 is having on our members and supporters and indeed the people of Guyana.

According to him, in March, 2020, during the height of the last General and Regional Elections (GRE), I was inspired to create the legal framework to combat the Covid-19 pandemic, in order to save lives. It is the first of its kind in Guyana.

“Currently, we are the country with the highest death rate per capita in this hemisphere. Over nine hundred and eight three (983) deaths have occurred due to Covid-19 to date.

I am still saddened by the loss of Comrades Gloria Lindo-Wolfe, Namela Henry, Imran Khan, Mondale Smith and many other comrades to COVID-19.”

Speaking about the Congress, he said the party is being asked to hold the event in this milieu and therefore it can’t be business as usual. The world has had to adapt and also Guyana.

“The PNCR must also adapt lest we ‘kill-off’ our treasured members. Virtual meetings, and other forms have taken over to avoid wherever possible face-to-face meetings in order to prevent the spread of Covid-19 and more deaths therefrom.
I do not propose to provide the occasion for our people to contract the virus by having them assembled to listen to me campaign for the post of leader.
I will adopt the relevant means of messaging as attend the pandemic.”

He added: “I can so do because I have been working nonstop for the last twenty (20) years as a member of our Central Executive Committee (CEC). During that time I spent seventeen (17) years in Parliament, practised as a lawyer at all material times, and served as Minister of Legal Affairs and Attorney General the last five (5) years for the APNU+AFC government.

I have been travelling incessantly the length and breadth of our Country and the diaspora to visit with our membership and indeed wider communities.

I can appropriately say ‘if you don’t know me by now you will never never know me.’

Williams said the only office he has never served in is that of Leader. “I believe that having been nurtured by our Founder Leader Linden Forbes Sampson Burnham and inherited by subsequent leaders after his death and having performed with excellence, the ordinary member, armed with facts and knowledge of my works would agree that Basil Williams SC is a sound choice for Leader of this great party of ours.

Nonetheless, the conduct of the elections for the 21st Biennial Delegates Congress could be quite taxing as it is unprecedented in the annals of our Party that is, decentralised to all other regions in the country and in the North American region my team and I, of necessity, must continue to assess that the process is transparent.”

He said if the leader is to be the Presidential Candidate then this brings into focus other considerations such as whether the leader can win a General and Regional Elections (GRE), whether he or she is a dual citizen and is otherwise qualified under the rules of the PNCR and the Constitution of Guyana.

“It would be my distinct pleasure to serve as your Leader and therefore come the day of elections, I unequivocally ask for your vote.

Once again I thank our members for reposing confidence in me.”

Sun Nov 28 , 2021
Support Village Voice News With a Donation of Your Choice. —-Mayor accuses PPPC deliberately stymieing development of township By Clifford Stanley Mayor of New Amsterdam in Region 6 (East Berbice/Corentyne) Mrs Winifred Heywood has said that the ruling People’ Progressive Party/Civic has over the past year been carrying out a deliberate policy of non-support for the township. In an interview […]