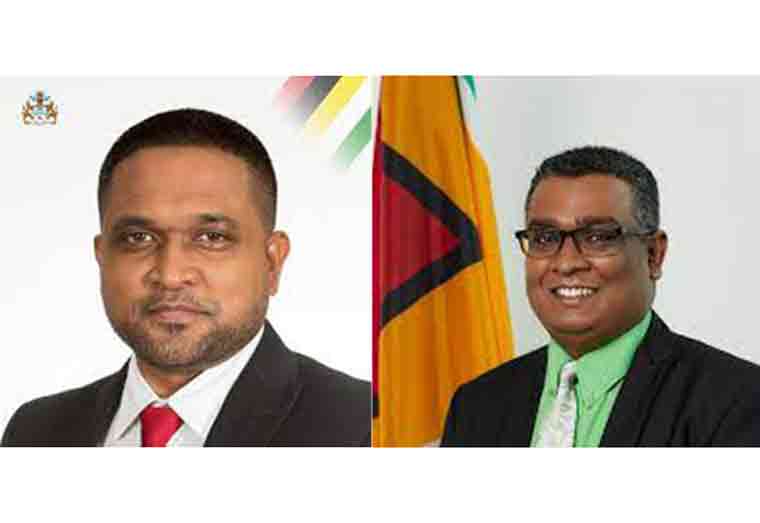 …Dharamlall assures no such plan in the pipeline

With Local Government Elections no longer possible this year due to a virtual halt in operation at the Guyana Elections Commission (GECOM) Secretariat, Opposition Member of Parliament Ganesh Mahipaul is warning Government against the installation of Interim Management Committees (IMC) at the level of the Town Councils and Neighbourhood Democratic Councils (NDCs).

In an interview with the Village Voice Newspaper, the A Partnership for National Unity + Alliance For Change (APNU+AFC) Member of Parliament said when the National Assembly reconvenes, he expects that the Minister of Local Government and Regional Development, Nigel Dharamlall, will place before the House a Local Authorities (Election) (Amendment) Bill for the postponement of elections of Councillors of local democratic organs, which were expected to be conducted before December 6. MP Mahipaul said anything else, would be unacceptable.

“In order to facilitate the continuation of the life of these local democratic organs, the Minister of Local Government will have to come to Parliament and seek an amendment to the legislation to extend the life of those local organs. My fear is that this regime will seek to install IMCs and that will be an insult and slap in the face of the progress our country has made in reference to Local democracy,” MP Mahipaul told this newspaper.

The Opposition Parliamentarian said the Government must resist any urge to revert to a system of IMCs, as existed prior to the APNU+AFC taking Office in 2015. “I urge that they don’t go down that road because it will be met with strictest of rejection,” he warned.

In keeping with a commitment by the then APNU+AFC Government to restore local democracy in Guyana, Local Government Elections were held for the first time in March 2016 after a 22-year hiatus. In accordance with the law, the elections were again held in November, 2018.

However, under the People’s Progressive Party/Civic (PPP/C) Government, Local Government Elections were not held in 22 years, having last held in 1994. In the absence of those critical elections, the PPP/C Administration had dissolved the Councils and, in doing so, installed IMCs by utilizing Section 30 of the Local Government Act, Chapter 28:02. By February 2013, 50% of the 65 NDCs across the country were controlled by IMCs installed by the PPP/C Government.

In his first address to the National Assembly on June 26, 2015 as Minister of Communities, Ronald Bulkan accused the PPP/C of crippling local democracy in Guyana.

The then Communities Minister said: “Local Government Elections, as it is well known, was last held in 1994. They were last due in 1997, which means that it is some 18 years overdue. It is resulted in normal local administration being paralysed. Our councils are largely dysfunctional. The previous administration had shown little interest in empowering our people. In fact, it has presided over the degeneration of the system of local government.

To add insult to injury, it demolished duly elected councils and replaced them with unelected Interim Management Councils, also known as IMCs. In many cases, the democratic principle was not adhered to and those IMCs were largely peopled with friends and favourites of the former administration which has compounded the problem of the degradation, destruction and the dysfunction of the system of local government. It has procrastinated, so far as, the need for the holding of Local Government Elections.”

Due to the PPP/C’s track record, MP Mahipaul expressed a fear that the Irfaan Ali Administration will attempt to reintroduce IMCs.

But Minister of Local Government and Regional Development, Nigel Dharamlall, in a brief interview with the Village Voice Newspaper, rejected the contention that PPP/C Administration may seek to revert to IMCs.

“We have not spoken about IMCs and I don’t think that we will get to that point,” Minister Dharamlall told this newspaper, as he warned against those seeking to create “confusion.”

The Local Government Minister assured that necessary steps will be taken to preserve the life of the Town Councils and NDCs through legislative amendments. “Certainly, whatever legal channels we have to go through, we will go through them to ensure things are done in the right and proper way. So when it comes to that point, yes, we will have to do so,” he told this newspaper.

“It could be held in 2022 once GECOM is ready. Once we start working around April, May, June, we can get it right,” he posited.

The operations of the Elections Secretariat have been severely crippled due to the absence of the Chief Elections Officer (CEO), Deputy Chief Elections Officer (DCEO) and other senior functionaries. The last CEO, Keith Lowenfield, along with his DCEO, Roxane Myers, was fired in June, 2021, after the PPP/C aligned Commissioners successfully moved three motions to have the services of the duo as well as the Region Four Returning Officer (RO) Clairmont Mingo terminated based on allegations of electoral fraud. Since then the process of appointing persons to the two top posts has been moving at snail’s pace.

MP Mahipaul, while optimistic that the posts will be filled, expressed concerns over the need for the National Register of Registrants (NRR) to be revamped to allow for a clean voters’ list.

“It is evident that the country is not in support of this regime that is guilty of a number of malpractices, and the country is yearning for an election but one with a clean voters’ list,” he said while acknowledging that the generation of a new NRR would require legislative changes.

Sun Nov 28 , 2021
Support Village Voice News With a Donation of Your Choice. The A Partnership for National Unity + Alliance For Change (APNU+AFC) has turned to the National Assembly for answers on the recent award of a $614M contract to Mohammed’s Enterprise for the construction of a state-of-the-art building to house the Guyana Fire Service headquarters at Durban Park, Homestretch Avenue. At […]