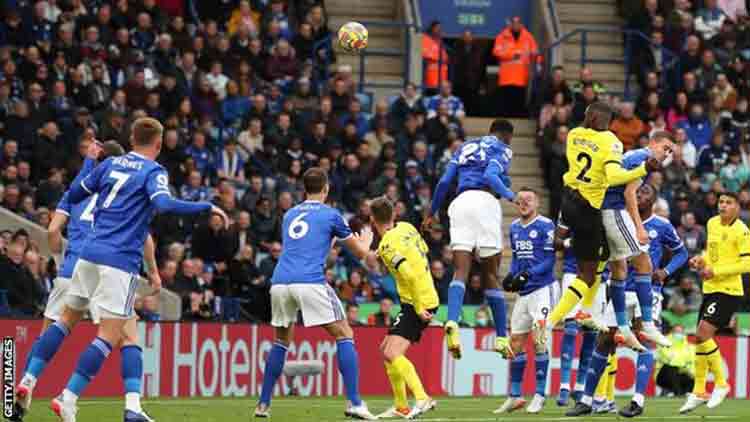 …after hitting three against Leicester

Antonio Rudiger continued his habit of scoring against the Foxes with a glancing, looping header from a corner whipped in by ex-Leicester wing-back Ben Chilwell.

Another former Foxes favourite, midfielder N’Golo Kante, doubled the lead by firing home from the edge of the box after being allowed to roam 30 yards virtually unchallenged.

Chelsea could have been out of sight by half-time, Chilwell grazing the bar when he should have scored from an early one-on-one with Kasper Schmeichel, who later denied Kante with his legs.

Leicester offered more as an attacking force after the break as Edouard Mendy made a fabulous save to tip away a fierce long-range shot from Daniel Amartey and Jamie Vardy headed over from close range.

But Chelsea, who stretched their lead at the top to six points before Saturday’s later kick-offs, could have had more as Schmeichel saved smartly from Chilwell and Callum Hudson-Odoi curled inches over. The Blues had also three goals ruled out for offside, the assistant’s flag foiling Hudson-Odoi, Reece James and substitute Christian Pulisic, who slotted home Chelsea’s third from Hakim Ziyech’s cross.

The Blues’ last trip to King Power Stadium inadvertently led to the beginning of the Thomas Tuchel era, a limp 2-0 defeat in January proving to be predecessor Frank Lampard’s final game, and this display was further evidence, if needed, of how much they have progressed since. It was Chelsea’s fourth win in five Premier League away games, and they are yet to concede from open play – the only points they have dropped coming in a 1-1 draw at Liverpool when the Blues played the entire second half a man light. Just as impressive as their dazzling defensive record – just four goals conceded in 12 games – has been their ability to conjure goals despite injuries to Romelu Lukaku, Timo Werner and Pulisic.

No team in the top flight has had more players find the net than Chelsea – 15 – and the fact Rudiger and Kante, hardly prolific scorers, both registered their second goals of the campaign was further proof Tuchel’s side, who barely missed a step on their return from the international break, carry a threat from all over the pitch.

It was another chastening afternoon for Leicester, who have become regular contenders for the Champions League places in recent seasons, but look as far away from that top four as at any point of Brendan Rodgers’ reign.

Since the start of last season, no side has conceded more goals from corners than the Foxes with Rudiger’s early effort taking that tally to 15. However, they were torn apart just as often from open play, as evidenced by defence-splitting through balls from Jorginho that led to big chances for Chilwell and Kante, while the room the latter was allowed to run into for his goal verged on embarrassing. They were just as poor defensively after the interval, as only some wasteful finishing, a couple of Schmeichel saves and some marginal, albeit correct, offside calls kept the margin of defeat respectable.

Sun Nov 21 , 2021
Support Village Voice News With a Donation of Your Choice. WASHINGTON, Nov 17, 2021 — Remittances to low- and middle-income countries are projected to have grown a strong 7.3 percent to reach $589 billion in 2021. This return to growth is more robust than earlier estimates and follows the resilience of flows in 2020 when remittances declined by only 1.7 […]