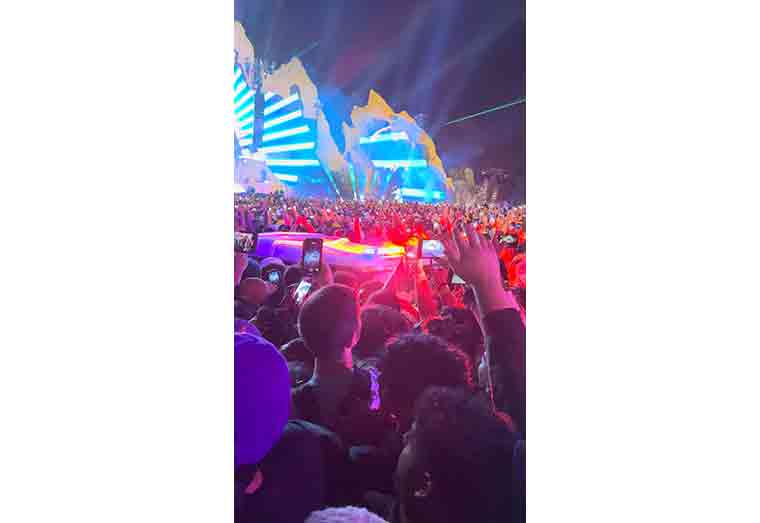 HOUSTON, Nov 6 (Reuters) – A crush of rap music fans pushing toward the stage during Travis Scott’s Astroworld festival in Houston killed at least eight people and injured many more as panic rippled through the packed crowd, officials said on Saturday.

The disaster unfolded at NRG Park at around 9 p.m. on Friday during the headline performance by Scott, a Grammy Award-nominated singer and producer. As some in the sold-out audience of about 50,000 surged toward the stage, people began to fall unconscious, some apparently suffering cardiac arrest or other medical issues, officials told reporters outside the venue. Minutes later the chaos was declared a “mass casualty incident.”

“It happened all at once. It seemed like it just happened … over the course of just a few minutes,” said Houston Police Executive Assistant Chief Larry Satterwhite.

After mobbing entrance gates and merchandise booths early in the day, the crowd grew increasingly unruly as performers took the stage, according to 19-year-old festival goer Hamad Al Barrak.

“There were just too many people,’ said Al Barrak, who described chaos as he tried to buy festival gear. “People were up on each other. We were all pressed together. You felt like you couldn’t breathe.”

Houston-born Scott said he would support the police as they investigate the incident and wanted to help the community heal.

“I’m absolutely devastated by what took place last night. My prayers go out to the families and all those impacted by what happened at Astroworld Festival,” Scott wrote on Twitter. “Love You All.”

In an interview with CNN, Houston Fire Chief Samuel Peña described how the crush of fans quickly overwhelmed the private security hired for the festival, a two-day affair that was scheduled to culminate on Saturday.

Authorities transported about 23 people in serious condition to hospitals, 11 of them critical, Pena told CNN. One of the injured was 10 years old. At least eight people succumbed to their injuries, he said, adding that the death toll could rise.

Videos posted to social media showed a chaotic scene as fans and staff tried to bring attention to injured concert-goers. One video showed fans attempting to make camera operators aware of the dangerous situation. A separate video showed people waving toward the stage and chanting “Stop the show!”

It was not yet clear what caused the disaster. An investigation was underway that is likely to focus on security and safety protocols at the event.

Two weeks ago, organizers of another Houston concert canceled it abruptly after fans pushed through a gate and stormed into a Playboi Carti show being held within the same NRG Park complex. Astroworld had a similar breech on Friday afternoon and went ahead with the show, according to TV reports.

Jennifer Ortega, 22, who arrived about 1 p.m. said access was orderly at that time. But by 4 p.m. the crowd at the smaller of the festival’s two stages “got pretty reckless,” with people throwing water bottles. She said she witnessed about three people leaving the area with bloody noses and missing teeth.

Organizers and Scott were both cooperating with police.

“We are focused on supporting local officials however we can,” Astroworld Fest, an event organized by Live Nation Entertainment, said on Twitter. It said it was cancelling the second day of the festival.

FANS IN DISTRESS
Scott stopped multiple times during his 75-minute performance when he spotted fans in distress near the stage, video posted online showed. He asked security to make sure they were safe. Emergency vehicles, lights and alarms flashing, cut through the audience several times.

“We need somebody to help. Somebody passed out right here,” Scott said, according to video of his set, which included a guest appearance by Canadian rapper Drake. “Security, somebody, jump in here real quick.”

Another video clip, which Reuters could not immediately verify as authentic, showed police performing CPR on several people even as music blared in the background.

The tragedy harkens back to a 1979 concert by British rock band The Who in which 11 people were killed when fans stampeded into the Riverfront Coliseum in Cincinnati before the event.

A reunification center was set up for families who had not heard from loved ones at the festival, the Houston Fire Department said on Twitter. Scott, who came to fame in the early 2010s for his unique vocal style has a daughter with Kylie Jenner from the famed Kardashian family. Astroworld is also the name of his third studio album released in 2018 to critical acclaim.

Sun Nov 7 , 2021
Support Village Voice News With a Donation of Your Choice. Commenting on the oral presentation of a forthcoming paper ‘The judiciary and the 2020 elections in Guyana’ by political scientists and team leaders of the Caricom recount process for those elections, Professor Cynthia Barrow-Giles and Dr Ronnie Yearwood, a lecturer at the University of the West Indies, the Stabroek News […]