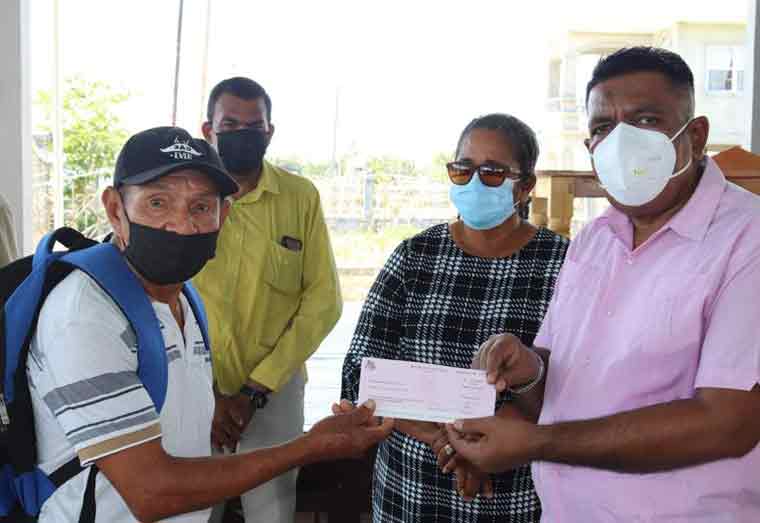 More than 1000 Region Two farmers received $350 million in flood relief grants on Friday, during an outreach spearheaded by Minister of Agriculture, Zulfikar Mustapha.

The Government has set aside some $7.6 billion for the initiative as a way of supporting farmers who suffered losses in the recent countrywide flood.

Ms. Liloatie Takoordeen, was among the hundreds who showed up early at the Anna Regina Town Council to receive her cheque. She told DPI that she was badly affected by the recent flood.

“I am going to take this money and full up my land and purchase some black dust to plant some more vegetables,” Ms. Takoordeen said.

Another farmer, Ms. Haimrajie Basso said she has been enjoying a better life with the PPP/C Government at the helm of the nation, noting that since the Administration took office promises are being fulfilled.

“He is doing a great lot for us in the Good Hope area. At least when I collected the $25000 COVID-19 cash grant I made good use of it. now that I am receiving this today, I am going to rebuild my pen and get back my farm because I had a lot of loses,” the woman stated.

Addressing the gathering, Minister Mustapha said the money given will assist farmers to return to their farmlands.

“This is an assistance that the government is giving to farmers and other stakeholder who would have lost. And sometime when we go around to the various regions, we are getting complaints about people’s name being on the list but they were not affected and the genuine people did not receive help. That is the reason we took a while to come to Region Two because we wanted to have a very accurate and sanitised list.”

The Minister reiterated that the Government continues to make the wellbeing of all farmers a priority as it strives to remove every barrier affecting the food sector.

“I want to assure you as Minister of Agriculture that as long you have suffered as a result of the flood, you will receive some help from the government. Our government has been making extremely high contribution in terms of investment to the various sectors in our country,” Minister Mustapha said.

He stressed the importance of agriculture and its contributions to the nation’s economy, noting that Guyana is once again leading the agriculture agenda in the Caribbean.

“When we took government on year ago, Guyana had surrendered its position to St. Vincent, and that country was speaking on agriculture. Earlier this year, at the first Heads of Government meeting, we rescued back that position and today, our President, Dr. Mohammed Irfaan Ali is the lead spokesperson on agriculture in Caricom,” the Minister added.

The disbursement exercises were held in Anna Regina, Spring Gardens, and Suddie.

Meanwhile, another exercise led by Minister of Local Government and Regional Development, Nigel Dharamlall, M.P, saw over $20million being distributed to the Charity and Queenstown communities.

Minister Dharamlall reminded the farmers that this initiative is one of many the Government intends to implement to provide some form of relief amid the covid pandemic.

“We know that this relief that we are providing is not full compensation for everything that you have lost, but it is a means to get back into production. I hope that you are going to put your money to good use and be genuine about what you lost and the support that you have been provided. This is all part of the taxes that all of us pay, so please don’t treat it with any discontent or be dissatisfied.”

He stressed that the Government remains committed to improving the lives of its people in every way possible as promised during their election campaign. The Local Government Minister also reflected on incidents where persons had lied about their ‘damages’ to benefit from this programme and the consequences of such actions.

“If you know that someone genuinely is not a farmer and they still came forward to receive a payment then I think you should let us know…we have actually proceeded to take police action against some individuals who were relatively unscrupulous to want to benefit for this program with genuine farmers.” Minister Dharamlall emphasized. (DPI)

Sun Oct 17 , 2021
Support Village Voice News With a Donation of Your Choice. Five stocks in the Lucas Stock Index (LSI) traded this second period of October 2021 with one of them registering a loss. The stock price of SPL rose 10.526 percent causing its market value to go up by G$458.139 million. It was joined by DDL which stock price rose 3.175 […]