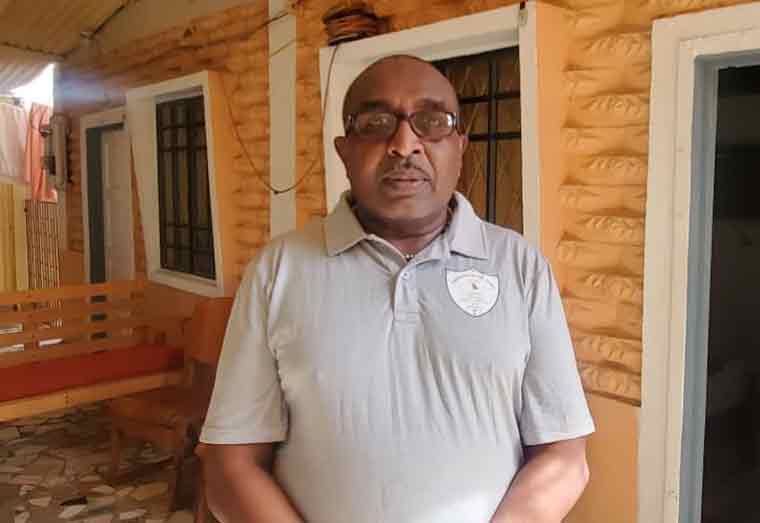 “I got COVID in prison, I suffered a heart attack, I suffered two fires, endured public embarrassment and I have a new name – Colin Bailey, former murder accused; I don’t intend to take it lightly,” Bailey told this newspaper.

Bailey said he also developed an attitude of prayer. “Almost every inmate, don’t matter how criminal minded they are, they pray every day, morning and in the afternoon, they might just finish cussing but they pray,” he said.

“Whenever there is a search, you have to walk in front of female officers standing there, old people, bigger than you, female, and you have to strip naked, bend down, everything showing, and they are female officers. It is like there is no respect for you,” he said.

One day after he was freed of the charge linking him to the murder of his reputed wife, Sirmattie Ramnaress, 57-year-old Colin Bailey – an ex-police sergeant has vowed to take legal actions against the State for what he deemed as wrongful incarceration.

“If I don’t, I would not do any justice to those who are in there innocently. I just can’t come out of prison and behave like all is well, I can’t do that because other people might suffer the same fate like me,” he told this newspaper.

Society is divided on the outcome of the case. Many expressed the desire for a full trial, others knocked the poor work of the police and DPP chambers.

For five years, eight months, Bailey lived behind bars, charged with the murder of his reputed wife, though there was no evidence by the state linking him to the heinous crime. In fact, the prosecution, on Wednesday, conceded that from the inception there was never any evidence upon which to charge Bailey.

Moments before he was acquitted of the murder charge, High Court Judge, Justice Jo-Ann Barlow, in her ruling, said: “there is something fundamentally wrong with the Justice System when a citizen can be charged, committed and indicted when there is no evidence connecting the citizen with the commission of the offence.”

Noting that there is a clear need for the Guyana Police Force to enhance his investigative capacity, Bailey said citizens must hold them accountable. “It is very important for victims or family of victims who suffer criminal situation, justice is not served when someone is charged, especially when it is the wrong person. Injustice is served to the person who is charged, and injustice is served to the relatives because the wrong person is there and the actual perpetrator is still on the road,” he said.

He said the Guyana Police Force and by extension the State took away close to six years of his life. “I got COVID in prison, I suffered a heart attack, I suffered two fires, endured public embarrassment and I have a new name – Colin Bailey, former murder accused; I don’t intend to take it lightly,” Bailey told this newspaper.

A TURN FOR THE WORSE
On February 24, 2016, Bailey – a father of three – went from being a police sergeant – with more than 21-years of service under his belt – to becoming a prisoner. He was remanded after being hauled before the Georgetown Magistrates’ Court and charged for the murder of his reputed wife at their Diamond Housing Scheme, East Bank Demerara (EBD) home between August 30 and August 31, 2013.

“It took me nearly a week to believe what was happening to me, knowing that I hadn’t done anything. I was thinking, I am here for something I have never even thought about,” Bailey recalled.

The ex-police sergeant said that he felt betrayed by the Guyana Police Force, and by extension the State. “It was not that I did something and made a mistake somewhere, I didn’t cover a track, and the police investigate thoroughly and they found that Bailey did do this. But there I was at that time, defending something that I never did. I was devastated,” he said.

I’M INNOCENT
Recapping the events that unfolded from the time of the murder to the time of his release, Bailey said he was at the Cheddi Jagan International Airport (CJIA) on official duty when he received the devastating news –his reputed wife, of 21 years, was murdered. According to reports, the woman’s throat was slit and her head bashed.

Bailey told this newspaper that initially, he was of the opinion that his reputed wife, who was the then franchise holder of the ‘Chief’ brand, was murdered because of a multimillion dollar settlement she had received.

However, in 2015, approximately two years after the stabbing to death of Ramnaress, Bailey was invited to the Criminal Investigation Department (CID) where he was informed that an individual by the name of Collin Grant was arrested in connection with the murder.

In identifying Grant, Bailey told investigators that the suspect lived next to their Diamond residence, however, he [Bailey] hardly ever interacted with him.

In Grant’s initial statement to the police, which was seen by Village Voice News, he alleged that Ramnaress, in August 2013, had approached one of his friends, Paul Bascom, who is now dead, to kill her reputed husband.

According to the statement, Bascom after expressing some reservation about the alleged request on August 29, 2013, went unto robbing Ramnaress in her home a day or two later. Another individual, according to the statement, was involved in the alleged robbery. Grant told investigators that he had acquired the information from Bascom, after receiving a laptop and $100,000 to clear a debt owed.

“I asked him, why yall murder the woman? And he [Bascom] told me it was [name given] and due to the noise she was making, [name given] hold on pun she and beat she up,” Grant told police investigators.

Bailey, said while he does not believe that his wife was plotting to kill him as suggested in the statement, he was able to identify a number of stolen items in Grant’s possession.

The ex-police sergeant said much to his surprise, Grant changed his statement approximately four days later and laid the blame at his feet. The ex-cop rejected the claims that he had arranged for Ramnaress to be killed.

Bailey is convinced that rogue cops together with a relative of his reputed wife, had conspired to put him behind bars, and it was on that basis that Grant changed his story.

Bailey said on February 22, 2016, police investigators again invited him down to CID Headquarters. By February 24, 2016, Bailey was charged with the murder of Ramnaress based on the advice of the Chambers of the Director of Public Prosecutions. Notably, last week, Grant admitted to the murder.

Bailey told Village Voice News that contrary to reports, he and his reputed wife were not separated. It was pointed out that days before her death, they stuck her birthday cake together on August 26, 2013.

Bailey explained that due to him being stationed on the East Coast of Demerara, he stayed at the house in Vryheid’s Lust during the week, and on weekends he would travel to Diamond. According to him, he spent Ramnaress’ birthday with her and left the following day, and never returned to the Diamond house until the day her body was discovered.

The ex-police sergeant said though their relationship was not perfect, they shared a decent one filled with love and celebration. “In any relationship, a push, and honestly might have a chuck or something but for 21 years I could count it on my fingers, and for 21 years, from 1992 to the time of her death we never separated. She might have been ( done things allegedly)…but that doesn’t give me the right to kill her because, I wasn’t a saint anywhere in that sense,” he posited.

BEHIND BARS
For most of his life, Bailey smoked cigarette but when he was offered one the very day he arrived in prison, he declined.

Bailey said he also developed an attitude of prayer. “Almost every inmate, don’t matter how criminal minded they are, they pray every day, morning and in the afternoon, they might just finish cussing but they pray,” he said.

Noting that the prison is extremely depressing, Bailey said in order to get attention, the prisoners would have to scream and shout. He disclosed too that some prisoners, who had come into contact with him while he was performing his duty as station sergeant, had threatened to hurt him on numerous occasions.

The ex-police sergeant said he felt as though upon entering prison he was stripped of his pride and dignity. “Whenever there is a search, you have to walk in front of female officers standing there, old people, bigger than you, female, and you have to strip naked, bend down, everything showing, and they are female officers. It is like there is no respect for you,” he said.

He said despite the poor and humiliating conditions, he and former Guyana Defence Force (GDF) captain Orwain Sandy formed a group – ‘Prisoners of Hope’ to provide much needed support to the prisoners. “There are so many persons in prison, who have been convicted without evidence,” he posited. Aside from being an advocate for prisoners, Bailey intends to go into the field of business.

Over 63 Covid deaths in October

Sun Oct 17 , 2021
Support Village Voice News With a Donation of Your Choice. There have been 63 COVID-19 deaths this month as of October 16, pushing the overall death toll of the virus to 862. Meanwhile, deaths are still being recorded for September — Guyana’s worst month of COVID deaths to date — with the toll now at 172. For October thus far, […] 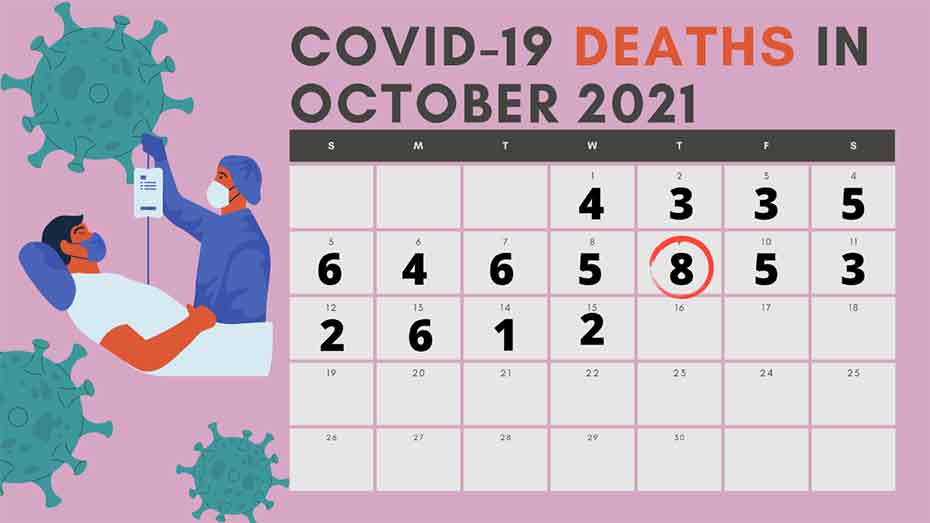