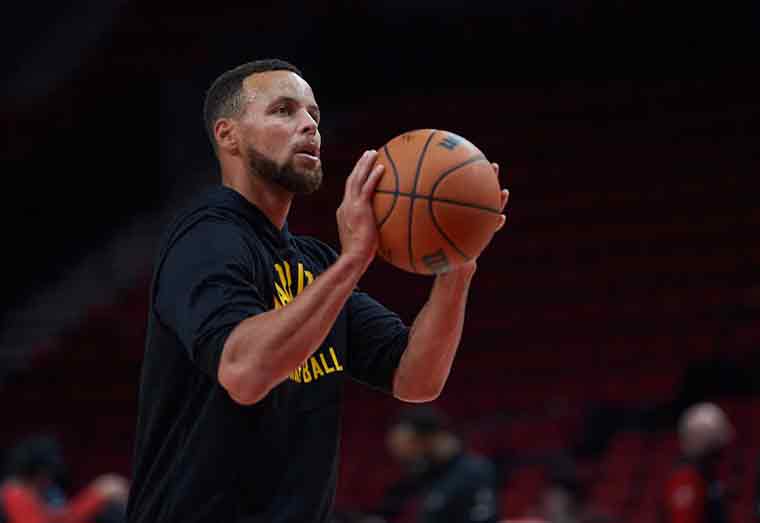 The 17-time All-Star James picked up his fourth NBA Finals MVP title last year after helping the Lakers win the championship over the Miami Heat, adding another accolade to his dazzling career.

Curry, who faced James and the Cleveland Cavaliers for four straight years in the NBA Finals from 2015 to 2018, heaped praise on James. “He set the standard for that,” Curry said before Friday’s preseason game against the Lakers, which the Warriors won 121-114.

“Nine straight Finals, all the things that he’s accomplished. You have a vision of sustaining your prime for as long as you can, kind of re-imagining what that looks like.

“So you know the work that goes into it, especially in the off-seasons, especially how you take care of your body, your mind. Balance on court, off court.” Two-time MVP Curry said James started attending his games while the Warriors star was still playing for Davidson College in North Carolina in 2008.

“For me, it’s a weird perspective just because I still remember my college days and he was just coming into his prime in the league,” Curry said.

“And my sophomore year, (NCAA) tournament run he came to a game, then came to a game my junior year. This is hilarious. I still have a jersey that he signed back in ’08 in my parents’ house back in Charlotte. “So it’s kind of weird to think about what’s happened in the last 13, 14 years.” The 2021-2022 NBA regular season will begin on Oct. 19.

Sun Oct 10 , 2021
Support Village Voice News With a Donation of Your Choice. (BBC) China’s President Xi Jinping has said that “reunification” with Taiwan “must be fulfilled”, as heightened tensions over the island continue. Mr Xi said unification should be achieved peacefully, but warned that the Chinese people had a “glorious tradition” of opposing separatism. In response, Taiwan said its future lay in […]