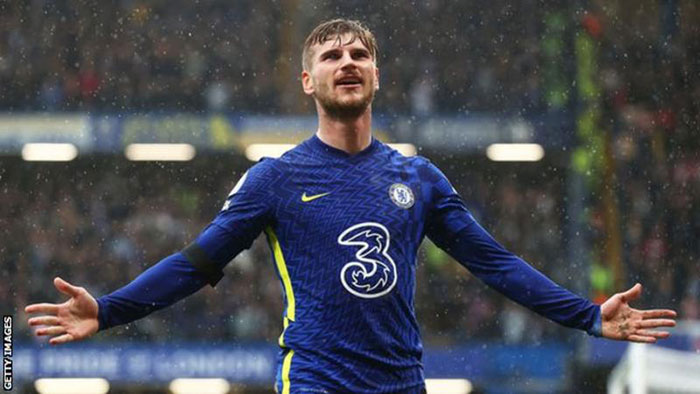 Timo Werner and Ben Chilwell struck in the final six minutes after Saints had been reduced to 10 men following the dismissal of captain James Ward-Prowse for a poor challenge on Jorginho.

Academy product Trevoh Chalobah put the hosts ahead after nine minutes, swooping at the back post to head in his second of the season after Ruben Loftus-Cheek flicked on Chilwell’s corner.

A dominant Chelsea had the ball in the net on two further occasions in the first half, however Romelu Lukaku was flagged offside and Werner’s header was ruled out following a foul by Cesar Azpilicueta on Kyle Walker-Peters in the build-up.

The hosts were punished for not extending their advantage when former Chelsea player Tino Livramento was tripped by Chilwell in the box and Ward-Prowse fired in the resulting penalty.

However, the visitors could not hold out for a point following the loss of their skipper, whose yellow card was upgraded to a straight red after referee Martin Atkinson viewed the pitchside monitor.

And having lost 1-0 to Juventus in the Champions League in midweek after their unbeaten league start was ended by Manchester City, Werner and Chilwell’s late strikes ensured Chelsea returned to winning ways at Stamford Bridge.

Chelsea have not lost back-to-back Premier League matches since Tuchel’s January appointment, a record which speaks volumes of the Blues’ consistency under the former Paris St-Germain boss.

But having struggled for creativity in the final third in their previous two outings, the energetic Werner was named among five changes on Saturday as Chilwell and Loftus-Cheek made their first league starts of the season.

The German forward eventually got the goal his tireless efforts deserved, meeting Azpilicueta’s low cross in the closing stages for his first goal of the campaign before Chilwell ensured victory in the 89th minute with a fine strike.

The hosts had made a dominant start and Werner was denied by both Saints goalkeeper Alex McCarthy and a superb sliding block from Oriol Romeu before seeing his header overruled by the video assistant referee.

That decision, reached after referee Atkinson reviewed Azpilicueta’s foul, led to a booking for a frustrated Tuchel in the aftermath – and that sense of injustice was compounded when Saints levelled.

However, Ward-Prowse’s red card proved pivotal as, after McCarthy produced an excellent save to deny Werner, Chelsea were able to exploit the extra space afforded to them to end Saints’ resistance.

Ralph Hasenhuttl’s Southampton, meanwhile, go into the October international break without a win after seven Premier League games, nine including the end of last season, which equals their worst winless run under the Austrian.

PAHO calls for united response to COVID-19 in Caribbean

Sun Oct 3 , 2021
Support Village Voice News With a Donation of Your Choice. Washington, DC, September 30, 2021 (PAHO) – Pan American Health Organization (PAHO) Director Carissa F. Etienne today outlined key priorities to end the “most significant health crisis to affect our region in a century” and urged countries to work together to address the health, economic and social impacts of the […]