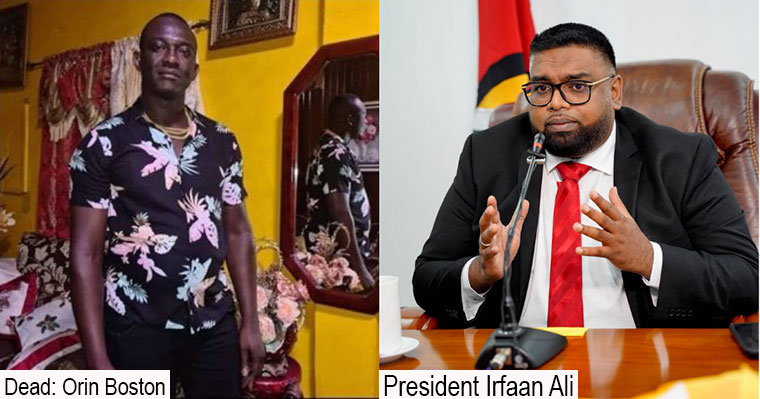 President Irfaan Ali has stopped short in committing to an independent inquiry into the killing of Essequibo Businessman, Orin Boston and has even urged citizens not to be too quick to judge the Guyana Police Force.

The Guyana Police Force over the years have had a notorious record of bungling probes touching on its members. Citizens’ hopes of an impartial investigation led by the police is at a all-time low.

Speaking on Friday at a news conference held in New York where the President is attending the 76th Session of the General Assembly of the United Nations (UN), Ali said he has already made it clear that there will be an impartial investigation into the police killing of Boston. Boston was laid to rest on Friday.

Recently, APNU+AFC Opposition and other groups have accused the Government — with Boston’s fatal shooting — of allowing the country to slip back into its history of extrajudicial killings which primarily targeted Afro-Guyanese.

Acting Leader of the Opposition, Roysdale Forde has stated: “Please be reminded: we live in a society with a sordid history of extrajudicial killings and sadly, this development has a frightening resemblance of a time in this country when these summary executions
were the order of the day. We have returned to the dark days under the PPP/C.”

In another statement, the PNC/R said while it will await the outcome of the investigation and though, as a nation, there should be no hastiness in assumptions, the experience has reminded Guyanese of the actions of the GPF under the former PPP administration. “Our
nation is still scarred from the actions of the Target Special Squad who gunned down, on April 6, 2002, Shaka Blair, a 32-year-old East Coast Demerara businessman,” the PNCR said. The party expressed hope that this killing does not languish in a similar manner
as the murder of the Henry boys.

However, in response to the questions posed about the connections being drawn to extrajudicial killings, President Ali said that nothing could be further from the truth.

The President said that now, in present-day, the Opposition is using the same tactic to discredit the PPP/C. However, he said that his Administration’s aim is to bring Guyanese people together rather than to divide them.

“Our vision in government is to bring this country together. Our vision in government is to develop Guyana in a peaceful environment, an environment in which every Guyanese enjoys prosperity. So, you can’t return to something that never existed. If you’re starting
from a foundation of lies, you can’t return to the foundation of lies. So, I’m not going to go beyond that in responding to this because there is no basis,” he contended.

EXPECT AN IMPARTIAL INVESTIGATION
Meanwhile, the President has assured the public that there will be an impartial investigation into Boston’s fatal shooting and has asked the public not to be too quick to judge the Guyana Police Force (GPF).

Questioned by the media whether he would support an independent investigation into the matter as requested by Boston’s family through their lawyers, the President said: “I have already made it very clear that there’ll be an impartial investigation.” He did not address
whether it would be conducted independently of the GPF.

The family’s lawyers, Nigel Hughes and Konyo Sandiford, had noted in a statement that an investigation into Boston’s murder should be conducted by “independent professional investigators with the appropriate contemporary forensic equipment and training”.

The position was shared that GPF had issued press statements on the fatal shooting without any attempt to secure statements from the eyewitnesses which has caused irreparably damaged the confidence necessary for the conduct of a credible investigation.

President Ali said that he is aware that the GPF has forwarded the file in the matter to the Chairman of the Police Complaints Authority for review. He told the media that when he returns from the US, he expects a full update on the matter.

“We are going to support a thorough investigation, and let us see, let us await the outcome of the police investigation. Sometimes we move quickly to cast judgment or condemn the operations of the Police. Let us see what comes out of the investigation and on my
return, this is one of the matters that, of course, will be priority on the agenda,” he said.

The President also noted the family of Boston and his community can also expect high-level engagement as his Administration does not intend to shy away from such matters.

Boston, a 29-year-old father of two, was shot dead in his Dartmouth, Essequibo home by a member of the Special Weapons and Tactics (SWAT) Unit during an anti-crime operation on Wednesday, September 15, 2021.

According to his wife, Fiona Boston, he was shot in his sleep. However, the Guyana Police Force has alleged that it was during a confrontation. The heavily armed unit was in search of prohibited items, however, none were found at his home.

Boston, according to the autopsy report, died from shock and haemorrhage due to gunshot injuries to the chest. A single warhead was extracted from Boston’s body and was handed over to the police.

His death resulted in a fiery protest across the village of Dartmouth and widespread condemnation from all sections of society. The father of two was laid to rest on Friday, September 24

Brentford come from behind twice to hold Liverpool

Sun Sep 26 , 2021
Support Village Voice News With a Donation of Your Choice. (BBC SPORT) Yoane Wissa scored a late equaliser as Brentford held Liverpool to a draw in a thrilling encounter at the Brentford Community Stadium. Wissa’s dinked finish over Alisson rescued a point for the hosts, who matched Jurgen Klopp’s team for long spells and created enough opportunities to claim all […] 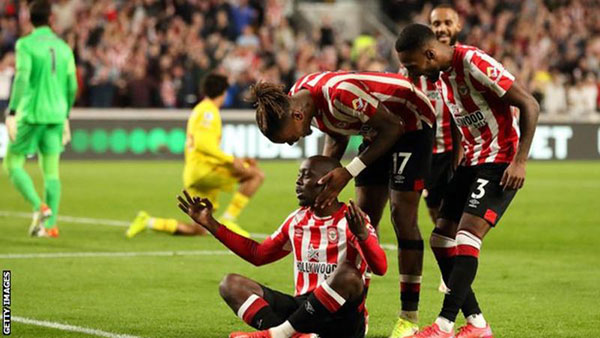