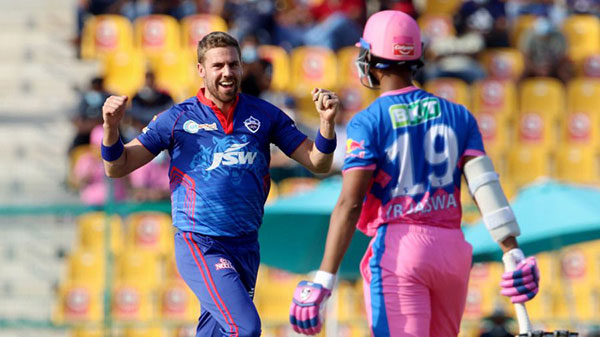 (CRICINFO) What appeared at the innings break like a small mountain to climb soon looked like Everest to a struggling Rajasthan Royals batting lineup as Delhi Capitals turned in a disciplined team bowling effort led by Anrich Nortje to comfortably defend 154, winning by 33 runs in Abu Dhabi on Saturday afternoon.

Royals were always behind in the chase after losing three wickets in the powerplay as the overseas pair of Liam Livingstone and David Miller fell cheaply to dent Royals chances. Sanju Samson could have been the fourth to fall in the sequence but was reprieved by DRS. He waged a lone battle through the rest of the innings, ending unbeaten on 70 off 53 balls but receiving little support at the opposite end. Mahipal Lomror’s 19 served as the only other score to get into double-digits as the Capitals strangled the scoring rate from start to finish to seal a victory that puts them two points clear of Chennai Super Kings into sole possession of first place in the IPL points table.

Royals were buoyant early in the match after Samson chose to field at the toss when Kartik Tyagi, the final over hero from Royals win over Punjab Kings in the middle of the week, struck with his very first ball of the match in Abu Dhabi after entering in the fourth over. Boundaries were hard to come by early on and Shikhar Dhawan tried to play with soft hands looking for a single in the ring but only managed to drag the ball back onto his stumps for 8.

The lack of boundaries created enough pressure for Prithvi Shaw to throw away his wicket soon after as well, beginning the fourth over shoveling a catch off Chetan Sakariya to Livingstone at mid-off to make it 21 for 2.

In what proved to be the most important partnership of the match, Shreyas Iyer was joined by Rishabh Pant for a 62-run third-wicket stand. The pair spent most of the sequence knocking around ones and twos. But Iyer delivered a pair of crunching blows in the 10th and 11th over taking on Rajasthan’s spinners.

Rahul Tewatia was the first victim as Iyer punched him back over his head for six. Tabraiz Shamsi, who came into the lineup in place of the unavailable Chris Morris, was the next to feel Iyer’s wrath, clubbing him over extra cover for an elegant six. On a day where boundaries were few and far between, these were a pair of hammer blows delivered straight to the gut of the Royals bowling unit. Iyer wound up top-scoring with 43 off 32 and when he and Pant departed, Shimron Hetmyer provided a flurry of boundaries in his 28 off 16 to propel Capitals toward and eventually past 150.

Royals power outage
Royals never got any momentum in their reply after a disappointing first six overs. Livingstone, who was sent up to open with Evin Lewis out injured, was dismissed in the first over by Avesh Khan, getting a toe edge to an attempted swat over the leg side. Yashasvi Jaiswal fended at the next ball to start the second over and sent a healthy edge through for Pant’s second catch as DRS had to be used to overturn a not out decision from Nortje’s appeal. A bigger blow was struck in the fifth when Miller’s charge to R Ashwin went completely awry resulting in a simple stumping for 7. At 17 for 3, Royals looked miles behind.

Samson continued to lose partners and was scoring at well under a run a ball by the time Riyan Parag’s missed slog to Axar Patel in the 12th made the score 55 for 5, leaving the required run rate at well above 10 per over with half the team gone. Samson eventually started to get unstuck by using finesse over power to find the boundary and get his innings going, eventually reaching a half-century off 39 balls. But by that stage the match was well gone. With 56 needed off the last three overs, Royals could only manage two boundaries off the final three overs as Capitals never let up their relentless discipline with the ball to seal their eighth win in 10 games.

Sun Sep 26 , 2021
Support Village Voice News With a Donation of Your Choice. …regional film competition to put spotlight on Guyana By Lisa Hamilton Throughout the years, Guyana has produced some of the best academic achievers and outstanding creatives that have proven that the country has an ever-increasing number of young people with the drive for excellence. However, existing simultaneously are the country’s […] 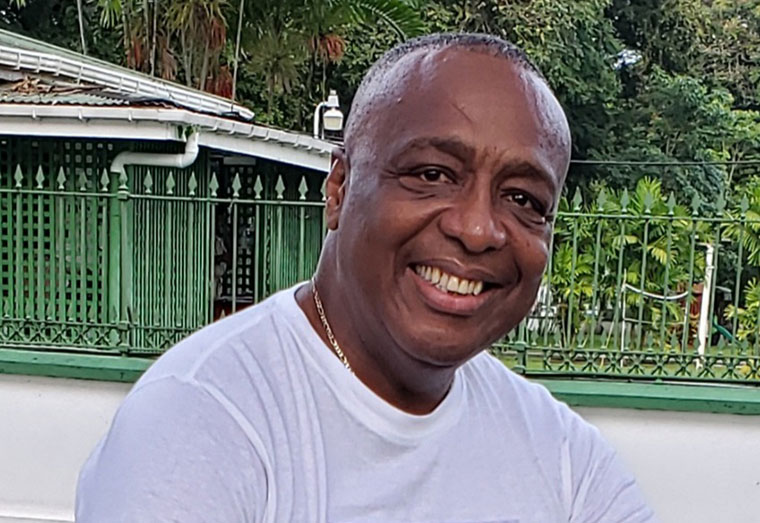