The invasion by members of the Guyana Police Force Special Weapons and Tactics (SWAT) Unit into the home of 29-year-old Orin Boston of Dartmouth, Essequibo Coast and fatally shooting him in his bed has not only sparked protests by residents of Dartmouth and surrounding communities but evoke concern about the state of Black lives in Guyana. It is of concern if all lives matter then Black lives must matter. When African Guyanese live in constant fear the coercive arm of the state is targeting them for brutality and death, and others look on in silence or no concern, then there is reason to feel Black Lives don’t matter.

Society is aware the group targeted in the main for police excesses is African Guyanese. Something has gone awry- some will argue for a while- where the police, who by motto should Serve and Protect the people, that some in uniform don’t feel such obligation. Any society that respects its laws knows that it is not the function or duty of the police to be judge, jury and executioner. A law-abiding society respects the process of justice, however long it may take, and knows the police is merely an enforcer of legal justice which is distinct from vigilante justice.
The killing of Boston in the wee hours of the morning last Wednesday, in his home, on the pretext the police had reason to interrogate him can find no justification, however or from whichever angle it is being looked at. The swift reaction of acting Commissioner of Police Nigel Hoppie to put the alleged offending officer under close arrest and order an investigation would mean nothing if justice is not served.
The society will look forward to a thorough investigation that will not only hold those responsible accountable in a court of law, but also conviction befitting the crime. The Guyana Police Force must also commit to serious internal examination of the conduct of all its officers and the disregard some have for Standard Operating Procedures.

The Police Force needs to rid itself of those who wear the uniform of the state and violate the rights and protection of the people living in the state. There was a time, not too long ago, when extrajudicial killings were the norm and the government of the day facilitating the malpractice.
Whilst some have fled the mayhem through migration, others have lived in fear, gloated or became desensitised.  None of the stated reality is good for human safety and security. The last time Guyana witnessed extrajudicial killings was an incident at the beginning of the David Granger/Moses Nagamootoo-A Partnership for National Unity and Alliance For Change (APNU+AFC)- coalition government.
Then President David Granger came out, and in no uncertain terms, announced his administration would not support such behaviour from any member of the Guyana Police Force. For the five years of the APNU+AFC government Guyanese did not have to be concerned about or extrajudicial killings.  There was assurance, if the Commander-in-Chief of the Armed Forces, which the President of Guyana is, issued an order whether formal or otherwise on respecting the laws, such will be followed.

Boston’s death has not only returned fear to society. There are reasons to be concerned whether Black Lives Matter or not, and the coalition’s five years was an anomaly not a norm. It is now up to President Irfaan Ali to send a similar message to the Guyana Police Force like former President David Granger. It is important for the Police to know he too will not tolerate extra judicial killings whilst he is Guyana’s President and Head of the Armed Forces.
The Guyana Police Force exists to enforce the laws not break the laws. Enough of the extrajudicial killings. If a person is a suspect, real or conjured, the Police must adhere to Standard Operating Procedures to secure justice for the aggrieved, be it the state or individual, and accused. This is what civilised societies do and law-abiding governments demand. These are not unreasonable requests or expectations

Sat Sep 18 , 2021
Support Village Voice News With a Donation of Your Choice. (BBC SPORT) Liverpool remain unbeaten in the Premier League this season after Sadio Mane scored his 100th goal for the club in a victory against Crystal Palace.  Jurgen Klopp’s side created numerous chances against a resilient Palace before Mane pounced on a rebound at the back post in the first […] 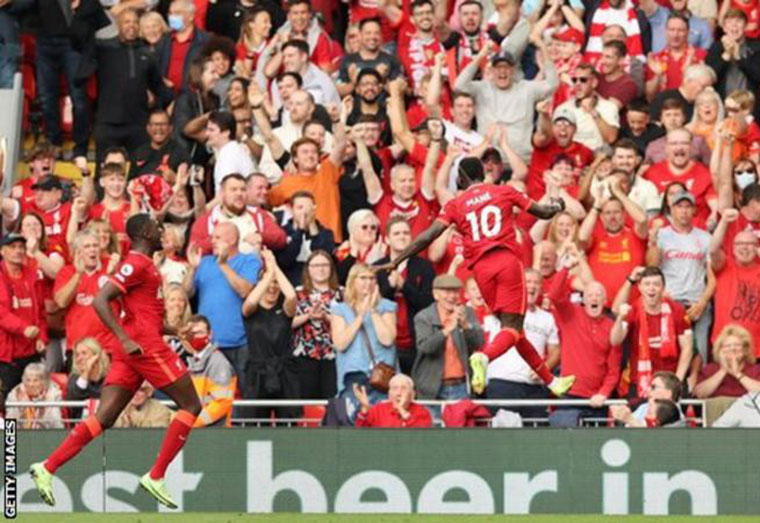