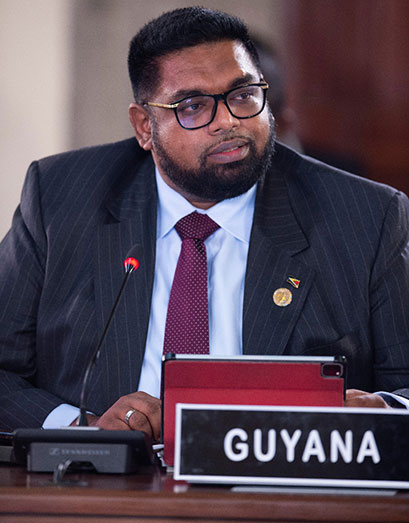 President Irfaan Ali, in address at the Sixth Summit of Heads of State and Government of the Community of Latin American and Caribbean States (CELAC) in Mexico, said Guyana is committed to providing strong leadership on issues such as climate change and food security.
“Guyana commits to the provision of strong leadership, especially on issues of climate change and food security. We will continue to pursue the development of our resources and people through an expanded version of the Low Carbon Development Strategy,” President Ali said in his address on Saturday.

Further, the country is will continue to support efforts that seek to promote peace, democracy, respect for the rule of law and deepening of regional integration. “Our strength must be grounded in principles and value- not circumstances and events,” the Head of State said.
He noted that this year’s gathering of the Summit takes place as the continuous battle against the COVID-19 pandemic wages on. With both Latin America and the Caribbean having been victims of vaccine hesitancy and vaccine nationalism, President Ali said it is important for the two regions to collaborate closely to address the pandemic and improved access to COVID-19 vaccines.
He stressed that Guyana will continue to call for governments and multilateral organisations to accelerate research, development, production and global distribution of COVID-19 vaccines and treatments based on the principle of international solidarity.
“The struggle for equitable access to vaccines must continue on all fronts with the paramount aim of preserving life and the right to health above all,” the President said.

REDUCE DEPENDENCE
The President stressed that Latin America and the Caribbean “must never again become victims of vaccine nationalism”.
“We must combine our scientific resources – intellectual and material – so as to reduce our dependence on the developed world in the event of future health crises, and to chart a common strategy to exit this pandemic and bolster economic recovery,” he urged.
The Head of State added that an integrated institutional mechanism must be developed to better respond to and coordinate resources to combat future pandemics.

“We must invest in the capacity within the region to self-sustain our efforts. So far, this pandemic has taught us how insulated the world can become. Secondly, we must lead efforts for a fairer global system not only in resource allocations but in regulation and approval. We must think about this carefully,” he told the regional leaders.
The President also noted that the socio-economic impact of the pandemic will have lasting and lingering effects. This, he said, was reinforced by the Economic Commission for Latin America and
the Caribbean (ECLAC) which warned that the health crisis has worsened the structural problems of low investment, unemployment, inequality and poverty—issues that must be addressed by the Summit.

CLIMATE CHANGE
President Ali explained that the Regional bloc’s problems extend beyond structural issues and also include the existential threat of climate change. He said that the regions will be given an opportunity to speak with a collective voice and to stress the urgency of increased and readily available financing for mitigation, adaptation and resilient infrastructure at the 26th Session of the Conference of Parties (COP26) of the United Nations Framework Convention on Climate Change (UNFCCC).
At COP26, a systemic approach in dealing with issues of the environment and climate change should be agreed on.
“This approach must speak to issues of access to resources, to address adaption and mitigation, establishment of a climate vulnerability fund, and fulfilment of pledges made by the developed world.”

VOLUNTARY FUND
The President also said that Guyana supports the establishment of a voluntary fund to facilitate regional disaster response since some priority issues for Caribbean Small Island Development States are centered around climate change and disaster risk management, access to concessional
financing, high levels of indebtedness, natural disaster funds and graduation and transition, among others.
With the combined effect of the pandemic and climate change severely hampering the developing world’s progress in achieving the Sustainable Development Goals (SDG) by 2030, President Ali urged that the regions “must therefore champion the call to address this through debt rescheduling and access to soft financing.”

FOOD SECURITY
The Head of State emphasised that food security is vital to post-pandemic recovery. As a result, Guyana strongly supports regional cooperation in ensuring a more food secure Latin America and the Caribbean.
In this regard, the President said, he hopes that the several recommendations presented by the Food and Agricultural Organization of the United Nations (FAO) and in the CELAC Food Security, Nutrition and Hunger Eradication Plan of 2025 can be translated into necessary actions that will advance “this crucial agenda”.
The Guyanese President also told the Summit that peace and security in Latin America and the Caribbean must be founded on political systems in which democracy, the rule of law and human rights are upheld, and in which the sovereignty and territorial integrity of states and the sanctity of treaties are respected.
He noted that focus should be on strengthening efforts in development capacity, improving governance, reducing poverty and removing barriers for trade and economic integration.
Minister of Foreign Affairs and International Cooperation, Hugh Todd; and the Director of Projects in the Office of the President, Marcia Nadir-Sharma are also in Mexico.
CELAC is a regional bloc of 33 Latin American and Caribbean states. (Modified OP Report)

Sun Sep 19 , 2021
Support Village Voice News With a Donation of Your Choice. …Boston’s wife wants killer behind bars …says her family needs counselling; urges swift justice “It’s not easy for my daughter, she witnessed everything,”  -Fiona Boston By Svetlana Marshall Advertisement Fiona Boston – the wife of 29-year-old Orin Boston who was shot and killed by a member of the of the […]