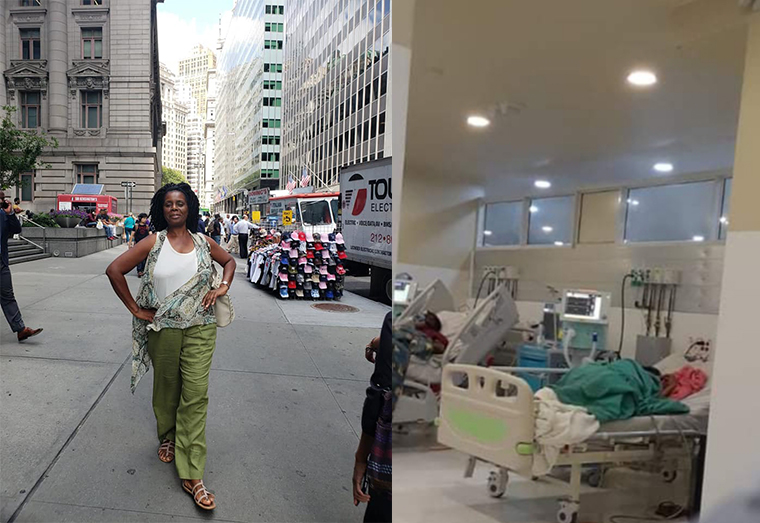 Noting that no one should have to endure the terrifying experience Vanessa Maynard had at the Infectious Diseases Hospital, relatives of the now dead nurse, are calling on President Irfaan Ali and his Administration to revamp Guyana’s healthcare sector to make it more responsive to the medical needs of citizens.

A nurse attached to the Davis Memorial Hospital for the past 38 years, Maynard, age 56, died in the COVID-19 Intensive Care Unit (ICU) at the Infectious Diseases Hospital at Liliendaal on September 9, 2021 – approximately 11 days after she was admitted.

According to her family, a much needed CT scan was never facilitated, and on her sick bed, Nurse Maynard had to bribe medical personnel at the Infectious Diseases Hospital to receive assistance. As a diabetic, Nurse Maynard ought to have been placed on a special diet, however, she was reportedly fed food that skyrocketed her blood sugar level.

During a recent press conference hosted by the Leader of the Opposition (ag), Roysdale Forde, Nurse Maynard’s niece Lindy-Kizzy Moore said based on the level of treatment received by her aunt, it is clear that Guyana’s Health Sector needs revamping.

“They have to reassess, reevaluate and reconstruct the entire healthcare infrastructure in Guyana,” Moore said while noting that the provision of healthcare should not be overshadowed by politics.

She said the Minister of Health, Dr. Frank Anthony and by extension the Government should ensure the country’s healthcare facilities are well staffed and well equipped to provide the necessary care, in keeping with international best practices.

“Revamp your infrastructure with regards to your healthcare system, make sure that if you have dedicated facilities that are allotted to care for persons with the COVID virus that you have enough trained doctors and nurses to administer medical care to these patients,” she said, while contending that the hospital at Liliendaal is severely understaffed. Moore said people must have confidence in the Public Health Care Sector.

“People want to make sure that their family members go into a hospital for a specific medical condition and they are able to come out safely and treated appropriately for that condition. It shouldn’t be anything as appalling as this,” Moore told the press.

Despite her grief, Maynard’s daughter Keneisha Carryl said the attitude of nurses and other medical personnel may be a reflection of their pay and hours of work. It was contended that during Nurse Maynard’s 11-day period of hospitalization, there were four (4) nurses to 64 patients.

“I think that the healthcare workers, they need to be appreciated more; their pay should be equal to their workload because satisfied workers generally perform better. When the workers are overworked and when they are underpaid, they can become more stressed and complacent,” Carryl reasoned while underscoring the need for proper dietary measures to be in place at health facilities.

“It should be suitable to the patient or the patient’s unique needs, for example, in the case of my mother who was diabetic,” she added.

But while the relatives of Nurse Maynard contended that there was a significant shortage of nurses and other medical personnel, Georgetown Public Hospital Corporation (GPHC’s) Communication Manager, Chelauna Providence said the staff to patient ratio provided by the family is incorrect.

“…the 4:64 quota [is] certainly not reflective of the situation at the facility. With the increase in admissions over the past few days, we’ve had in excess of 20 nurses working per shift daily. As of [Thursday], 18 additional nurses have been reassigned to the ‘Ocean View’ facility to assist with the management of the patients. This is in addition to nine (9) additional doctors, who have joined the current complement of 13 doctors, who work per shift,” Providence explained. As of Friday, September 10, there were 95 COVID-19 patients at the Liliendaal Hospital, of which 30 were in the COVID-19 ICU.

“At no point in time were there only 4 nurses in the facility. On the day that the vaccination requirements [were] implemented, the facility had a complement of eight (8) nurses on shift with 19 patients in the ICU,” Providence maintained.

But the family is calling on the Government to launch a full investigation into Nurse Maynard’s death.

“Our hope is that other family members don’t have to go through what we went through because this is completely unnecessary,” Moore said while noting that her aunt’s death could have been avoided.

According to the grieving family, Nurse Maynard, a diabetic, was taken to the Georgetown Public Hospital at around 13:00hrs on Sunday, August 29, 2021 after feeling unwell. There, a number of tests were conducted, and it was not until 22:00hrs that day, that she was transferred to the Liliendaal Hospital.

At the time of Nurse Maynard’s transfer, she had an abscess, which the nurses at GPHC assured, would be attended to upon her arrival at the Liliendaal Hospital, but, it took nurses there more than a day to clean the infected area.

With tears in her eyes, Nurse Maynard reportedly told the nurses at the Liliendaal Hospital that she would change the wound dressing herself if provided with the gauze and the iodine. It had reportedly gotten infected.

According to her, it was not until August 30 – the following day – that her vitals were taken and oxygen administered but the oxygen mask, one relatives said, was too small.

According to the woman’s relatives, she reportedly bribed nurses at the hospital to warm up her food and escort her to the bathroom.

By September 3, Nurse Maynard was informed that she would need to undergo a CT Scan at the St. Joseph Mercy’s Hospital, and though her family paid $60,000 to have the scan done, it was never executed because there was allegedly insufficient oxygen to transport her back and forth.

“They prepped her, they wheeled her out to the yard, and she was in the yard for several hours unattended; she was told, ‘oh we’re so sorry, the ambulance left. The second day, the same thing happened. They prepped her, took her to the yard unattended, several hours later, we are so sorry, the ambulance left…On the third day, they did have an ambulance available but they told her that to successfully transport her from Liliendaal to Mercy then back to Liliendaal, they would need an oxygen tank that can take at least 10 liters of oxygen, the tank only had 8, so they weren’t confident that the transport back and forth would be successful, so she was unable to get that CT scan,” one relative explained.

Leader of the Opposition (ag), Roysdale Forde, while extending condolences to Nurse Maynard’s family, expressed disappointment in the level of care she received.

“This entire episode, sadly, underlines the failure of the installed government’s ad hoc plan to combat the spread of COVID and reduce its impact on our population. It also underscores why the No Confidence Motion against the Minister of Health is not only necessary but urgent. The health sector is near collapse and is certainly in a state of crisis and ruin,” MP Forde told the press.

He said the APNU+AFC Coalition is deeply worried about the state of health care in Guyana. The Opposition Leader (ag) said the quality of service provided to Nurse Maynard speaks volume about the country’s public healthcare sector.

“The death of Nurse Maynard has to be looked at in the context of lapse enforcement of common sense guidelines that could contain the COVID-19 virus in our country. This is the healthcare system, in which Priya Manickchand wants the children to go to school and have face to face learning in, this is the healthcare system that Priya Manickchand want the teachers to go out and teach in, to teacher in institutions of learning, exposing our children potentially to this sort of healthcare,” Forde lamented.

According to him, based on the Nurse Maynard’s experience, the Infectious Diseases Hospital appears to be a ‘hell hole.’

He said the decision to “lockout” unvaccinated nurses and medical personnel comes at a time when more than 400 healthcare workers have not been paid, while others continue to work under less than desirable conditions.

“We salute the hardworking nurses and doctors and all health care workers who are valiantly working tirelessly and long hours in the most difficult and sometimes inhumane circumstances to care for patients. We call for them to be provided with the support, equipment and medicine they need to deliver an acceptable level of health care to the nation during this time of the pandemic,” the Opposition Leader (ag) said while calling on government to provide healthcare workers with a monthly cash transfer of $75,000.

APNU+AFC Member of Parliament and former Minister within the Ministry of Health, Dr. Karen Cummings said it was with deep shock that she learnt of the passing of a close friend. Like, Forde, she too expressed condolences to the family of Nurse Maynard. MP Cummings said at a time when the country should be uniting to combat the COVID-19 pandemic, the Government has barred the Opposition from sitting on the National COVID-19 Task Force – a situation she said is most disappointing. In recent weeks, the Opposition has calls on the government to facilitate a national forum to consult with stakeholders across sectors on a plan of action.

'Let the church roll on'

Sun Sep 12 , 2021
Support Village Voice News With a Donation of Your Choice. …Most Christian denominations have not instituted vaccination requirement for in-person worship By Lisa Hamilton The majority of Christian denominations in Guyana will not be requiring their members to present a COVID-19 vaccination card or a negative PCR test for face-to-face worship. On September 4, 2021, the Government issued an update […]