Weeks after the Irfaan Ali Administration rolled out its multibillion Flood Relief Cash Grant Programme there are concerns that some farmers, who were hard-hit by the floods, are not being adequately compensated, while those who experienced little to no losses are being given millions of dollars because of their political affiliation.

A Partnership for National Unity + Alliance For Change (APNU+AFC) Member of Parliament, Dineshwar Jaipersaud, who hails from Region Six, said there are reports that the grants are not being distributed in a fair and equitable manner. “There are reports of malpractices,” the Opposition MP said during an interview with Village Voice Newspaper.

The $7.8B Flood Relief Programme commenced on August 22, 2021 in Region Six – the People’s Progressive Party/Civic (PPP/C) Government’s stronghold – and though hundreds were reported to have received the cash transfers, MP Jaipersaud said many were short changed.

According to him, the “bulk of the discrimination” took place at the Chandisingh Secondary School in Port Mourant, where farmers from neighbouring communities had lined up to receive their cash grant. He said livestock, cattle and kitchen garden farmers were among those affected by what he alleged as discriminatory practices. “The communities know that these individuals lost a lot of stuff and when they went to receive their cash, they received a $50,000 compared to persons who received more than $50,000 who lost less than they did,” MP Jaipersaud said.

In Region Six alone, farmers are expected to receive a total of $1B, and according to MP Jaipersaud, the main opposition – APNU+AFC – is in the process of compiling a list of all the persons who have been discriminated against the during the ongoing programme. “It is a sad state because we know that this is not PPP money, this is the State’s money, this is tax payers’ money basically that is coming back to us, and all these individuals who have suffered contributed to the development of this country. It is the State’s duty to ensure a fair assessment was done and was supposed to be done,” he told this newspaper.

Just days ago, former Region 6 RDC Councillor and Community Activist, Gobin Harbhajan called on President Ali and the Minister of Agriculture Zulfikar Mustapa to conduct a full investigation into the flood relief programme in Region Six. “Six persons collected thousands/millions who never even plant a garden, some rice farmers collect millions who never even lost or cultivated their rice field, 98% of them harvested their crops during the rainy season and still make false claims,” Harbhajan said on his Facebook page. Village Voice News reached out to Minister Mustapha to comment on these allegations but we were unsuccessful.

APNU+AFC Member of Parliament, Ricky Ramsaroop told Village Voice News that the situation is even worse in Region Four. According to him, as of Saturday, August 28, 2021, only 12 farmers from Region Four (Demerara-Mahaica) had received the flood relief cash grant, though hundreds of farmers in the district suffered millions of dollars in losses. MP Ramsaroop said it is quite unfortunate that the Government is directing most of its attention to its stronghold – Region Six – while neglecting the other districts, such as Region Four.

“That is one of the disappointing things that is happening because Region 4 was also affected by the floods, and the government is basically focusing on their stronghold area, which is Region 6, and that’s where our concerns are because the resources are not equitably distributed,” he told this newspaper.

He pointed out that farms in Buxton, Victoria, Cove and John and Mocha Arcadia were destroyed by the recent floods, however, the farmers in those areas have not been prioritised. MP Ramsaroop accused the Government of engaging in corrupt practices and engaging in a system that discriminates against non-supporters.

“In Region Four, only 12 persons to date that we know were given the flood relief grant.  But when you compare this to Region Five, Region Five has 1,145 [beneficiaries], Region Six has 1,083, and when you look at all other regions, Region Four has the lowest number of beneficiaries,” he pointed.

Like MP Jaipersaud, MP Ramsaroop said that a clear and proper assessment ought to have been done ahead of the distribution exercise. He said it is clear that Government had not done sufficient groundwork to determine all those who were affected by the floods.

He said as a result of the poor assessment done, farmers who did not suffer any losses are benefiting. “We have learnt also that rice farmers in Berbice, some of them cut their rice already, and they still claimed for money, $65,000 per acre, how is that possible, and the people who really need it, the cash crop farmer, they are not getting the full compensation,” he reasoned.

When APNU+AFC Member of Parliament Devin Sears was contacted he said farmers in Region 10 Sub-district 2 (Kwakwani) had not benefited. President Ali in announcing the direct cash transfers, explained that the relief programme is intended to cushion the impact of the recent floods, which ravaged approximately 300 communities across Guyana, but the Opposition MPs said it is unfortunate that farmers who are desperately in need of the assistance have not been listed to benefit from the relief programme.

Data collected by the Government indicated that approximately 52,000 households were affected in three primary categories – homestead farmers, kitchen garden, and household exclusive of farms or gardens. According to the President, some 92,000 acres of farm and farmlands were completely affected while losses in the Sugar Industry was amounted to over $1.5B.

He said the Rice Sector also suffered heavily with approximately 50,000 acres and 2,000 farmers directly affected.  As such, farmers, who had harvested their rice but suffered losses due to the floods, will receive $80,000 per acre while for rice sowed and lost in the autumn crop, those farmers will receive $65,000 per acre. For land that was completely prepared but was not sowed, $45,000 per acre would be given to each farmers.

“In total, these four categories will benefit in excess of $600M direct transfers. In addition to these direct transfers, the Ministry of Agriculture and GLDA will be assisting through genetic improvements, drainage and irrigation works, technical support, and extension services to the approximate value of $500M,” the President said. The cash transfers are intended to help farmers and residents to return to some level of normalcy.

‘We staying here! We aint moving!

Sun Aug 29 , 2021
Support Village Voice News With a Donation of Your Choice. – evicted Hopetown farmers move on to other state lands at Fort Wellington  By Clifford Stanley  A number of cash crop farmers from Hopetown Village who have been farming state lands at Fort Wellington in Region 5 (Mahaica/Berbice) along with other farmers from Bath Settlement and surrounding villages, have been evicted by the PPPC […] 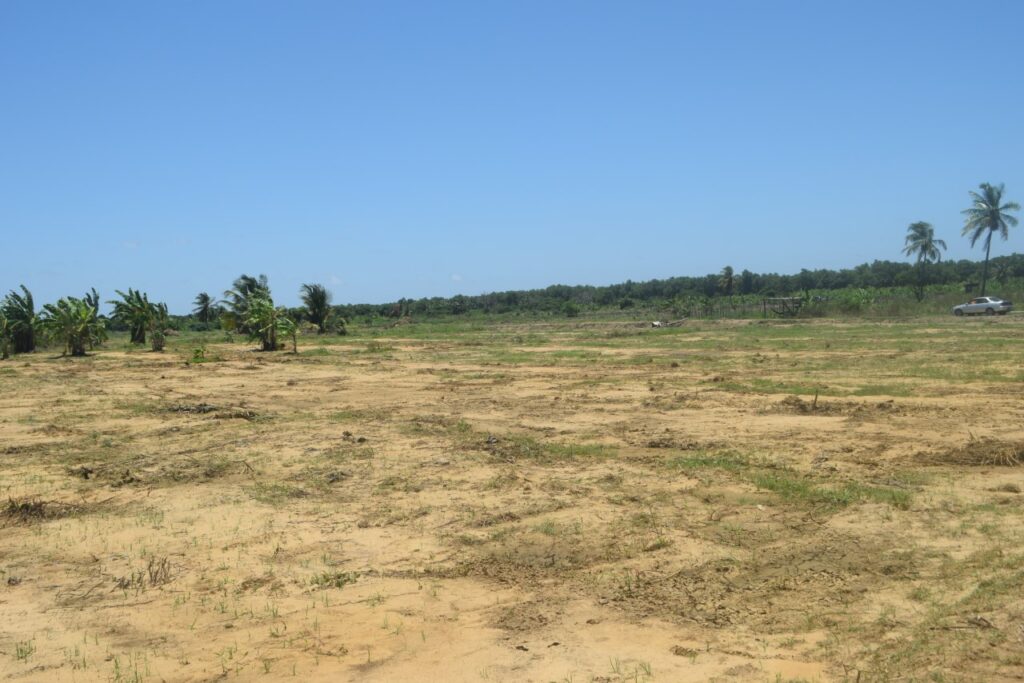