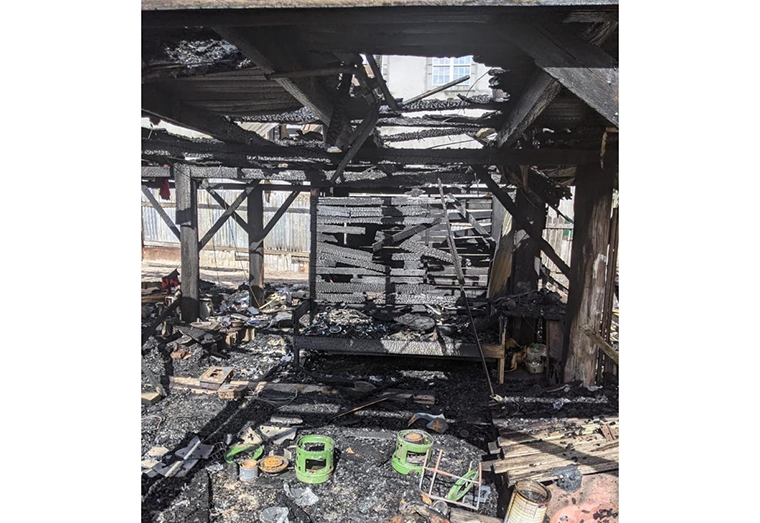 A fire of an unknown origin took the life of an 83-year-old woman during the wee hours of Monday morning.

Eighty-three-year-old Norma Semple was killed on Monday when her Block 22, Wismar, Linden home was consumed by fire.

The Guyana Police Force, in a statement, said the fire occurred between 02:15hrs and 02:50hrs on Monday.

Investigation has thus far revealed that Semple lived in the fully furnished one storey wooden house alone. According to a neighbor, Alita Prowell, she was inside her home when she heard a loud and continuously cracking sound which caused her to look through her window. It was then that Prowell observed the pensioner’s home completely engulfed in flames.

As a result an alarm was raised and neighbours sought to rescue the octogenarian but were pushed back by the flames.

The fire station was summoned and the fire was eventually extinguished.

A search was carried out among the debris and the lifeless body of a female who is suspected to be that of Norma Semple was seen on the ground below the kitchen area burnt beyond recognition.

The body was taken to the Linden Hospital Complex, and the woman’s death was confirmed.

It is now at the Pensioners Funeral Parlor Mortuary for storage awaiting a Post Mortem Examination.

The Police Force is investigating the deadly blaze.

Mon Jul 26 , 2021
Support Village Voice News With a Donation of Your Choice. …deems no confidence motions fake news, warns against party insurgency   Amid a torrent of criticism about his leadership, Leader of the People’s National Congress David Granger on Friday remained defiant, branding reports of two successful no confidence motions against him by party groups as ‘fake news’ and warned his party […]