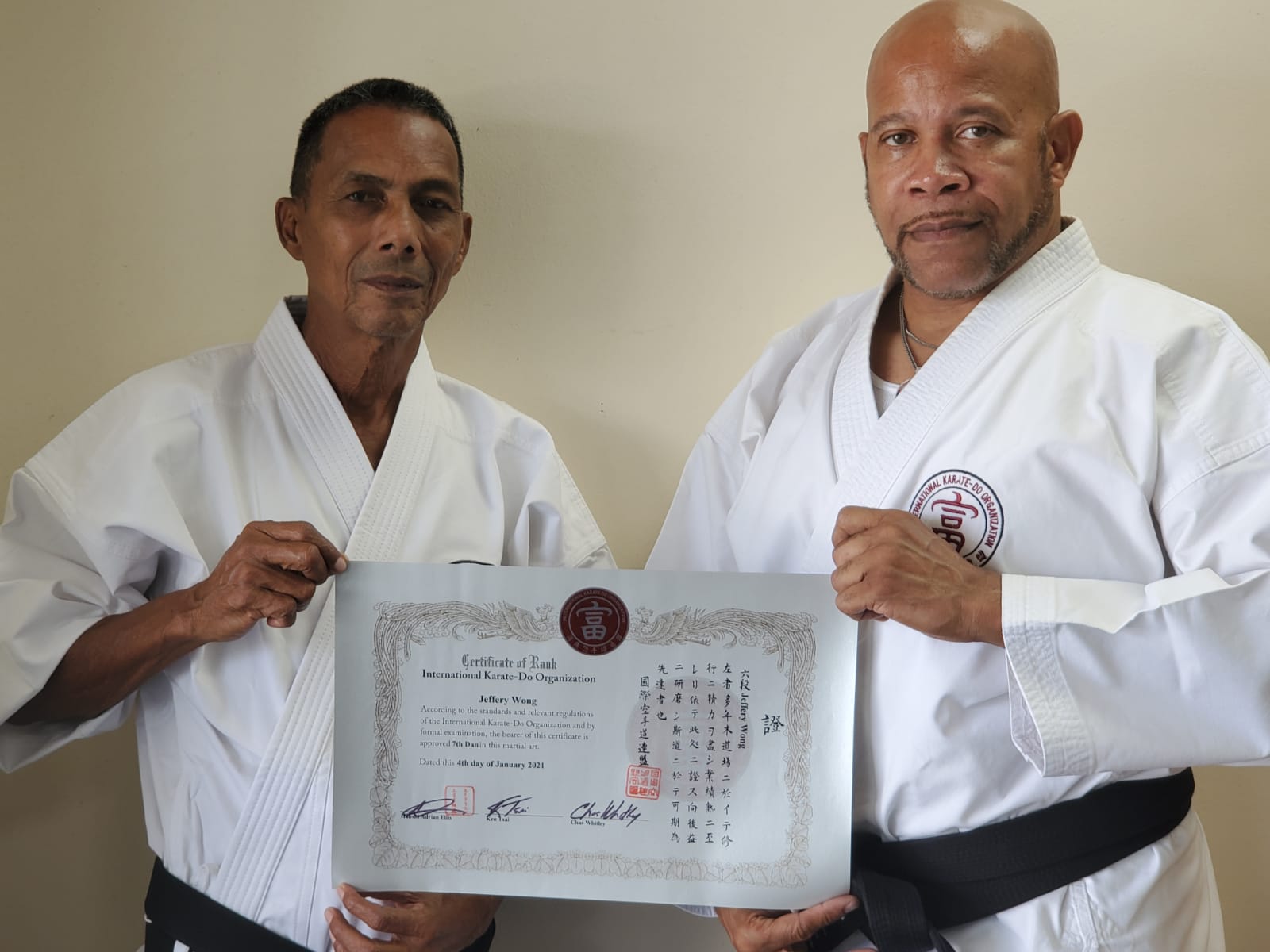 Chief Instructor and Chairman of the International Karate-do Organization’s Academy of Guyana, Sensei Jeffrey Wong who is currently on an official Karate visit to the United States, on Friday formally received the conferment of the Kodansha (High Dan Rank) from the Chief Master of the International Karate Organization Shihan Adrian Ellis and the members of his Shihan Kai Senate at their Great Dojo in Winter Park Florida.

Shihan Wong had several months ago successfully undertaken his 7th Degree Black Belt or (Shichi-dan) examination. The Shihankai consists of a small group of the IKO’s most senior instructors. They provide advice and counsel to the Chief Instructor on all matters Technical and Administrative. In addition, they review decisions by the Technical Committee and other committees and make recommendations to the Chief Instructor as needed.

In a press release Karate Organisation said, the designation Shihan is a Japanese term that is used in martial arts as a title for a Master or “teacher of teachers,” responsible for the structure and standards of style of those Senseis under his authority. Under the International Karate Organization’s rules Shihans must carry the rank of seventh dan or above.

Shihan Wong in an interview after being conferred with this high accolade, with humility said that grading is no longer the most important part of practicing karate for him, and said he was focused on passing his knowledge on to others.

Sensei Jeffrey as he is popularly known, began his training in the early 1970’s at the Anglican Archbishop’s residence in High Street Kingston. At that time karate in Guyana was under the umbrella of the Japan Karate Association (JKA) and Shihan Wong was able to benefit from interaction with and teaching from the fathers and masters of karate Masatoshi Nakayama, Teruyuki Okazaki, Takayuki Mikami, Shigeru Takashina and Yutaka Yaguchi

Shihan Wong attended as a brown belt, the first Caribbean Championships in 1976 that was held in Trinidad. Team Guyana brought second with him getting two silver medals, after which he successfully attended all the other Caribbean and National championships. He held the title of kumite champion for a number of years.

For more than 50 years, Shihan Wong has trained between three and five times a week, and has not restricted his teaching to only Guyanese students but was also responsible for setting up a dojo in St. Kitts and training its students in the 1980’s.

Shihan Wong’s capabilities in karate are clearly evident with many of his students blazing the trail, both in Guyana and across the globe, capturing many gold, silver and bronze medals and world championships.

The International Karate Organization is an authentic traditional Shotokan karate institution dedicated to the promotion and preservation of Shotokan karate. The IKO is the most professionally setup martial arts organization in the world. With members in over 100 countries, and is the world’s largest and most prestigious karate organization and the only legal karate entity officially recognized by the Japanese government as an association of members for the promotion of karate. They intend to spread Shotokan Karate throughout the length and breadth of Guyana.

The International Karate Organization insists that Karate is not a game of points, but is a martial art and way of life that trains a practitioner to be peaceful; but if conflict is unavoidable, true karate dictates taking down an opponent with a single blow. The insist that such an action from their students require strength, speed, focus, and control. This harmonious unity of mind and body is intensely powerful. Even the greatest physical strength and skill are no match for the power of wholeness. Shihan Wong is currently touring IKO affiliated dojos in the USA.

Sun Jul 18 , 2021
Support Village Voice News With a Donation of Your Choice. (BBC) South Africa President Cyril Ramaphosa has said the violence that has rocked the country was pre-planned, describing it as an assault on democracy. Riots were sparked by the jailing of former President Jacob Zuma. The death toll has risen to 212, up by almost 100 since Thursday, the government […]