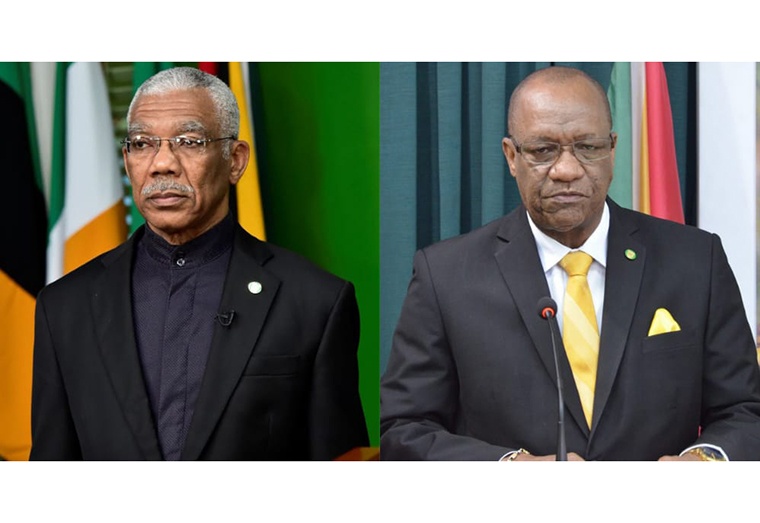 Despite the Members of the PNC/Rs Central Executive Committee (CEC) making clear their dissatisfaction with the unilateral decision of PNC/R Leader David Granger to accept two new political parties on behalf of the PNC/R into the APNU, the former President once again publicly noted his acceptance of the political parties at APNU’s anniversary celebration on Thursday.

Earlier on Thursday, the CEC Members stated their intention to elect “new leadership” of the PNC/R in a statement which called out General Secretary, Amna Ally and particularly, David Granger, for making decisions without consultation.

In its statement, the CEC Members stated that Granger continues to disregard the decisions of the CEC and has shown disregard to the PNC/R’s constitution through unilateral decision making. It announced the existence of a Congress Convening Sub-committee which is working to hold Congress and also stated that CEC Members have begun to meet with party members to inform them of the current state of the party towards “saving” the PNC/R.

However, at the APNU’s 10th Anniversary celebration — which was originally to be hosted at the PNC/Rs Agricola Office but switched to virtual after the CEC’s statement — Granger once again supported the two new political parties.

According to a release shared with the media, the PNC/R leader expressed regret that two partners – Justice For All Party and Working People’s Alliance – chose to withdraw from the Partnership of their own accord. The release then stated: “The Partnership, he said, welcomed the Equal Rights and Justice Party and the Guyana Nation Builders Movement.”

Furthermore, the opening remarks of Opposition Leader, Joseph Harmon made at the event was also released to the media. Therein, Harmon welcomed the two parties to the APNU.

“We welcome our new partners: The Equal Rights and Justice Party and Guyana Nation Builders Movement to the fold and encourage you to stay focused on the mission ahead to win back the Government of Guyana in the shortest possible time,” Harmon stated.

The CEC, in its earlier statement, pointed out that Members know nothing about the parties and are unaware of the benefits they bring to the party which warranted their acceptance. The CEC described the two parties as suspected “shell parties” part of an ulterior motive.

Furthermore, the CEC stated that, at its last meeting, Granger and Ally were specifically mandated to put on hold any further involvement of the PNC/R with the APNU until the status of that partnership was fully discussed and decisions on the way forward were taken.

Despite this decision, it said Granger went ahead and publicly advertised the PNC/R’s acceptance of the two parties. As a result, he was reminded by the CEC of the decision taken and the CEC stated that it expected that that would mark the end of the matter until future discussions.

However, the Committee updated: “Members, we are now witnessing this latest disregard of the party’s decision, compounded by Mr Granger affixing the symbols of these two non-approved parties onto a programme purported to be that of the APNU for its 10th Anniversary Celebrations. That is a ‘one-man show’ which the party will not allow Mr Granger to get away with. Therefore, the party does not recognize these two shell parties as part of the APNU.”

In his remarks at the APNU’s anniversary celebration, the former President spoke about APNU’s inclusionary approach which he said was the death knell of the “paranoid ‘winner-takes-all’ approach still favoured by the People’s Progressive Party”.

He said that APNU made a covenant with the Guyanese people to work together to reunite the country’s fractured polity and the five original parties of the APNU worked to do so — a work the new parties accepted to the APNU will continue.

Meanwhile, Harmon spoke about the APNU as “a dynamic force that will give leadership in the legislative process and in the country at large” and work to return to Government to better represent the interest of Guyanese.

On the other hand, the CEC Members, in their statement indicated that it is time for PNC/R Members to choose whether they want to stand on the side of history that supports good practice or on the side which disregards the PNC/R’s constitution through unilateral decision making.

The Committee stated: “A careful reading of the party’s Constitution indicates that no one is above it, not even Mr Granger…Members of the PNC/R, let us come together, hold Congress, elect new leadership, and continue the development of this great party to take back office at the next general and regional elections. Our great party is larger than any ‘one man’.”

Thu Jul 15 , 2021
Support Village Voice News With a Donation of Your Choice. Opposition Member of Parliament (MP) Annette Ferguson is expected to attend court soon in relation to cybercrime allegations laid against her back in June 2021. An update received from the Police on Thursday stated that the Police Legal Officer has advised Crime Chief, Wendell Blanhum — pursuant to investigations conducted […]