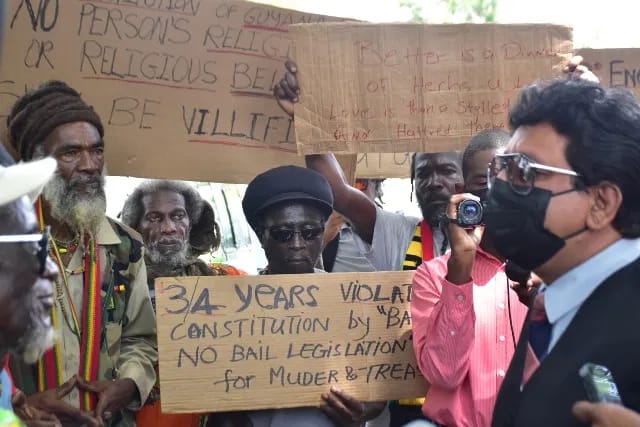 After several years of efforts by the Rastafarian Movement of Guyana to have a law passed to decriminalise small quantities of marijuana (cannabis), it appears as though another effort will be made to look into their advocacy.  Yesterday, a Parliamentary Special Select elected Attorney General and Minister of Legal Affairs Anil Nandlall as its head. The Committee is made up of three Government and four Opposition Members

The Committee will examine the Government’s Narcotic Drugs and Psychotropic (Control) Amendment Bill, to look at non-custodial sentences for persons in possession of marijuana weighing 15 grammes or less, with mandatory counselling, while those found with more than 15 grammes, but less than 30, would attract community service.

Members of the Rastafarian community have been protesting outside of the Attorney General’s Chambers to effect change to the Narcotic Drugs and Psychotropic (Control) Amendment Bill. The Attorney General who met with the demonstrators on Monday told them the government “can’t impose a law without input from the people, the law will not be obeyed. As a result, we have decided to take the Bill to a Special Select Committee.”

The Rastafarians have called the present Law “unjust.” Under the present law anyone found in possession of over 15 grammes of cannabis could be charged with possession of narcotics for trafficking. Summary conviction for being in possession of this weed/drug, for the offence, the person is liable to a sentence of at least three years but no more than five years, and a fine of at least $30,000 or the equivalent of three times the street value of the drug.

There has been a back and forth on reviewing the law for years. Earlier this year the People’s Progressive Party/Civic Government used its parliamentary majority to throw out the Opposition’s- A Partnership for National Unity and Alliance for Change- version of the Bill. The government’s bill is seeking to remove custodial sentences for the possession of less than 30 grammes of cannabis, while the opposition, through a motion, sought to introduce a separate bill setting the no-jail amount at 500 grammes.

In Jamaica, which is seen as the place where this weed has been popularised in the Caribbean and the country that founded the Rastafarian movement, the law has evolved. Small amount of marijuana has been decriminalised since 2015. Persons caught with 2 ounces (56 grams) or less of cannabis are supposed to pay a small fine and face no arrest or criminal record. People are also allowed to cultivate up to five plants, and Rastafarians are legally allowed to smoke ganja for sacramental purposes.

Gov’t allocates subventions to some NDCs

Tue Jun 29 , 2021
Support Village Voice News With a Donation of Your Choice. – observers call for similar treatment for all other local bodies The Government Department of Public Information (DPI) in a release on Monday announced Minister of Regional and Local Government, Nigel Dharamlall, has handed over some $37.5 million in subvention to 15 of the 17 Neighbourhood Democratic Councils (NDCs) in […]