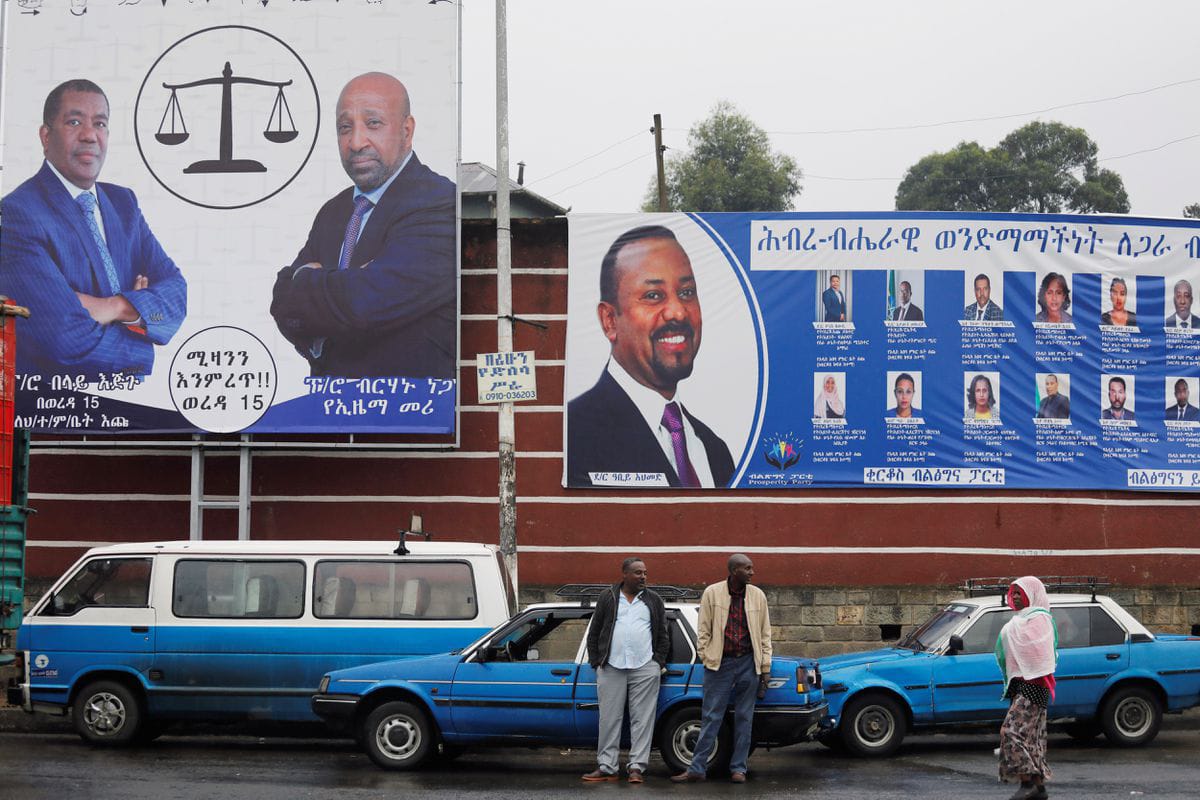 ADDIS ABABA, June 21 (Reuters) – Ethiopia held elections on Monday billed by the prime minister as proof of his commitment to democracy after decades of repressive rule, although voting was delayed due to violence in some areas and opposition parties boycotted the poll in others.

Election board chief Birtukan Midekssa said voting was mostly peaceful so far, but that several opposition parties had complained their agents were beaten and their badges confiscated in Amhara region and the Southern Nations, Nationalities, and Peoples’ Region. She did not say who was responsible.

“This will jeopardise the credibility of the election process and its result,” Birtukan warned. “Local officials and law enforcement officers should immediately take corrective measures.”

Prime Minister Abiy Ahmed said last week the national and regional votes would be the “first attempt at free and fair elections” in Ethiopia, whose once booming economy has been hit by conflict and the COVID-19 pandemic.

But ethnic violence and printing mistakes have delayed elections in a fifth of constituencies, including all of those in Tigray, where Ethiopia’s military has been fighting the northern region’s former governing party, the Tigray People’s Liberation Front (TPLF), since November.

In Oromiya, Ethiopia’s most populous province, the largest opposition parties are boycotting the vote over what they say is intimidation by regional security forces. read more

Government officials did not return calls seeking comment about the allegations of intimidation.

Voting was mostly smooth in Addis Ababa, although nine polling stations opened late and some did not have enough ballots, Birtukan told a news conference. read more

Abiy, 45, oversaw sweeping political and economic reforms after his appointment in 2018 by the ruling coalition. But some rights activists say those gains are being reversed and he is coming under increasing international pressure over reports of abuses in the war in Tigray.

Abiy has said the government will hold anyone committing abuses in Tigray to account and the attorney general says more than 50 soldiers are on trial for either rape or killing civilians. No details of those cases have been released.

Results of the vote could reverberate beyond Ethiopia.

The Horn of Africa nation is a diplomatic heavyweight in a volatile region, providing peacekeepers to Somalia, Sudan and South Sudan. With Africa’s second-biggest population, over a third aged under 18, it is also a major frontier market.

Abiy’s newly-formed Prosperity Party is the frontrunner in a crowded field of candidates mostly from smaller, ethnically-based parties. Billboards with his party’s lightbulb symbol scatter the capital.

Former political prisoner Berhanu Nega is the only other prominent candidate not running on an ethnic ticket. But his Ethiopian Citizens for Social Justice party has struggled to attract support outside cities.

“People are out in big numbers to vote,” Berhanu told Reuters after casting his ballot, saying his party was watching the process closely.

During the last election, the ruling coalition and its allies won all 547 seats. This time, more than 37 million of Ethiopia’s 109 million people are registered to vote, choosing from 46 parties for parliament.
Violence prevented voter registration in some areas.

The electoral board says more than 9,000 candidates are running this time – more than in any previous vote.

A second round of voting will take place in September for most constituencies where the vote was delayed.

No date has been set for voting in Tigray, where the United Nations says some 350,000 people face famine. read more

U.N. rights chief Michelle Bachelet said she expected a probe into reports of rights violations by “all parties to the conflict” in Tigray to be published in August. read more

The report is a joint investigation by the UN and the state-appointed Ethiopian Human Rights Commission.

Tigray is not Abiy’s only challenge. Ethnic violence in other regions has killed thousands since he took power.

Marketing director Yetayew Solomon, 30, told Reuters as he waited in line in the capital: “I will vote for a party that I think will bring peace.”

DEMOCRACY AND THE ECONOMY

Abiy’s reforms include lifting a ban on dozens of political parties and media outlets, releasing tens of thousands of political prisoners and easing restrictions on political gatherings.

“The government is using these laws to arrest people and keep them in prison for a long time,” Fisseha said.

Abiy’s spokewoman Billene Seyoum did not immediately respond to a request for comment but previously told Reuters: “There is no perfect environment; however, it cannot be said that a nascent democracy like Ethiopia is regressing.”

Many voters said they were also concerned about the economy.

Abiy has promised to bring in foreign investment and speed up electrification by filling a giant $4 billion hydropower dam on the Blue Nile, stoking tension with Egypt and Sudan, which fear the Nile water supplies they rely on might be interrupted.

But annual inflation is now about 20% and growth is forecast at just 2% this year after topping 10% before the pandemic.

“The cost of living is increasing,” said shopkeeper Murad Merga, whose window was crowded with ruling party posters. But he remained upbeat: “Everything will be fixed step by step.”

Mon Jun 21 , 2021
Support Village Voice News With a Donation of Your Choice. (BBC) Sweden’s parliament has passed a vote of no confidence in Prime Minister Stefan Lofven. A total of 181 of the 349 MPs voted in favour of the motion, with 51 abstentions. It is the first time in Swedish history that a prime minister has been ousted in such a […]