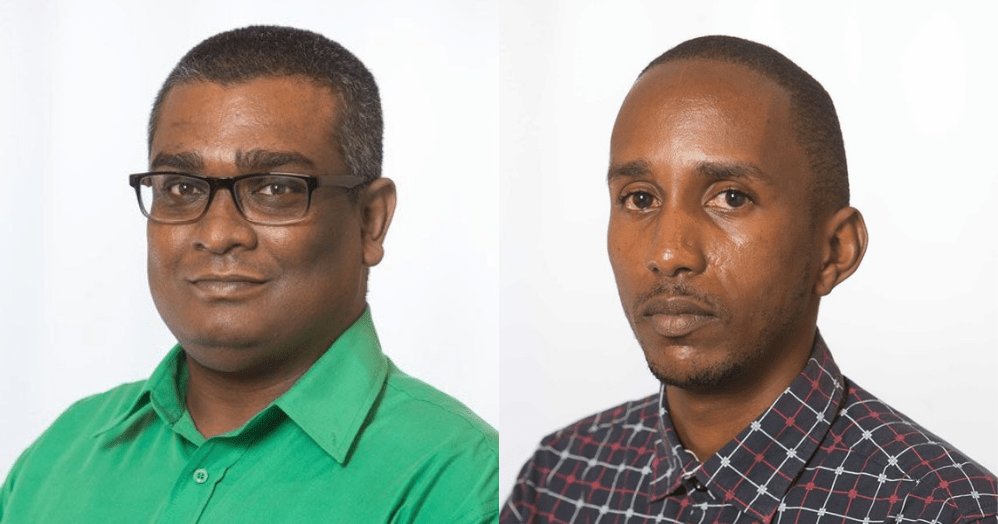 APNU+AFC Members of Parliament (MP) Ganesh Mahipaul and Shurwayne Holder have accused the Government of bypassing certain pro-opposition areas during its outreach to provide flood relief assistance or assessment.

During a press conference on Tuesday, Holder pinpointed the most affected areas in Region Two as along the Pomeroon River. This stretches from Karawab to St. John but, along the way, Akawini Creek, is reportedly the hardest hit.

“I visited the area, and I’ve spoken with a number of residents there, and what they’re saying is that the water has reached new heights there…also, what they said to me is that some of their kokers were blown away by the strong currents of the water,” Holder reported.

He also said that many farmers have lost all of their crops and most of their livestock. For others, he said water entered their homes and destroyed furniture and appliances.

He reminded the public that this marks the second time in about six months that the area has been flooded. Apart from Akawini Creek, he listed other communities affected such as Hackney, Aberdeen, Friendship, Marlborough, Karawab, Sirikie, Jacklow and others.

FLOOD RELIEF SHOULD BE FOR ALL AFFECTED

However, he said that his main issue is that there has been an intentional exclusion of the assistance of APNU+AFC Councillors in the area and he even had to ask a Councillor there to “force” himself on a team from the Government that recently visited the Region.

“From Sunday, a team went into the Pomeroon. They have not included any of our APNU+AFC Councillors. I actually had to ask our councillor in the Pomeroon to force his way and join the team just to ensure that we have some representation there. I really can’t understand how they went about providing relief. They went to areas what I would say are predominantly PPP strongholds. Areas that they would have won during the elections, and they would have bypassed several hard-hit communities within the Pomeroon, especially the lower Pomeroon area,” Holder said.

He continued: “They actually bypassed places like Hackney, Aberdeen, Marlborough, and other communities that are known APNU+AFC strongholds and they went straight down to St John’s, that’s the last community in the Pomeroon River. They passed Akawini Creek, which is just nearby, and didn’t give any assistance to those poor farmers and that area was the hardest hit. So, I am a bit puzzled as to their strategy in terms of providing this flood relief.”

Holder stressed that flood relief should be made available to all affected communities despite the majority political support there. He also expressed his disappointment that a Regional Disaster Committee or Emergency Committee has not been set up by the Government to tackle the flooding situation affecting several Regions.

Meanwhile, MP Mahipaul said that over in Region Three, he has visited communities from Parika on the East Bank of Essequibo to Patentia on the West Bank of Demerara. He said that several communities are still underwater.

He said that when the APNU+AFC took office in 2015, though there was heavy rainfall and communities there were flooding, immediate action was taken to clear canals and drains and a Regional Disaster Risk Management Committee was established to mitigate future flooding.

This, he said, allowed water to recede off of the land more swiftly and rather than being flooded for days, persons were flooded for hours.

Now, with no Regional Disaster Risk Management Committee in Region Three, Mahipaul said that there is poor direction.

He referenced the Malgre Toot, Goed Fortuin, Den Amstel, Vergenoegen and Parika areas as areas that were heavily hit but he claimed were selectively visited or not visited at all by the Minister.

The Opposition MP said that there must be a re-establishment of the Regional Disaster Risk Management Committee in Region Three and the involvement of all stakeholders including NDC Councillors whether they support the APNU+AFC of the PPP/C.

Wed Jun 2 , 2021
Support Village Voice News With a Donation of Your Choice. …Ramjattan says GECOM chair’s ‘show cause letter’ premature … says commission should wait outcome of court cases Leader of the Alliance For Change and Member of Parliament, Khemraj Ramjattan has expressed shock at the chairman of GECOM request for three officials to show cause why they should not be dismissed […]