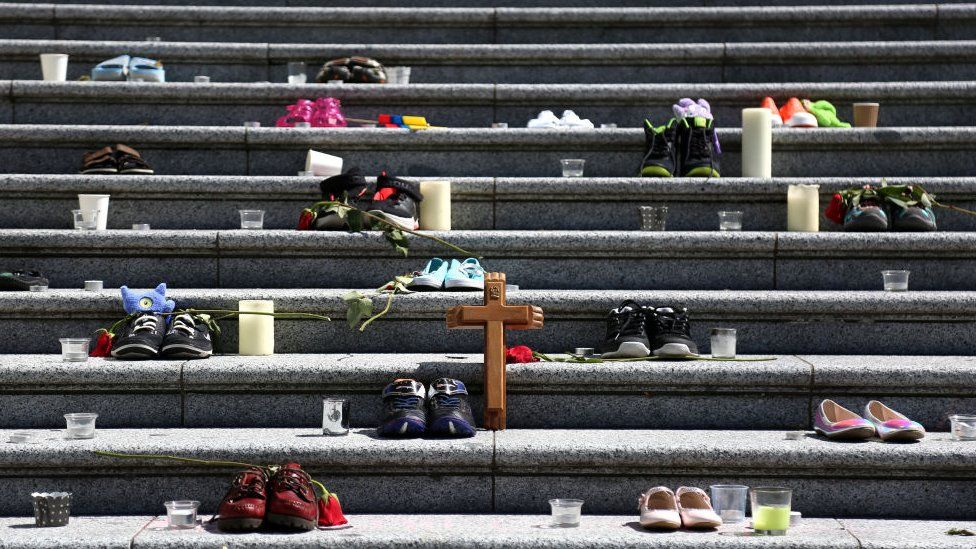 (BBC) Indigenous groups in Canada have demanded a nationwide search for further graves after the discovery of the remains of 215 children.

The find sparked outrage, prompting some in Canada to lay out tiny shoes at makeshift memorials.

“As a dad, I can’t imagine what it would feel like to have my kids taken away from me,” Mr Trudeau told reporters. “And as prime minister, I am appalled by the shameful policy that stole indigenous children from their communities.”

While he promised “concrete action” when asked what the government would do he did not offer specific commitments.

On Tuesday, Mr Trudeau released a statement marking the start of National Indigenous History Month, noting that the “heartbreaking discovery” in Kamloops last week “is not an exception or isolated incident”.

“A thorough investigation into all former residential school sites could lead to more truths of the genocide against our people,” Mr Bellegarde said.

The University of British Columbia (UBC) said in a statement it would meet on Monday to review a 1986 doctorate the school granted Roman Catholic Bishop John Fergus O’Grady – once the principal of the residential school where the children’s remains were found.

“Universities, including UBC, bear part of the responsibility for this history,” the university said of residential schools. “Our commitment is to learn from our mistakes.”

In Charlottetown on Prince Edward Island, a statue of Canada’s first Prime Minister, John A Macdonald, is being removed following the discovery of the children’s remains. Macdonald’s role in residential schools has made him a target for protesters.
The children found on Thursday were students at the Kamloops Indian Residential School in British Columbia that closed in 1978. Some were as young as three years old.

Canada’s residential schools were compulsory boarding schools run by the government and religious authorities during the 19th and 20th Centuries with the aim of forcibly assimilating indigenous youth.

Kamloops Indian Residential School was the largest in the residential system. Opened under Roman Catholic administration in 1890, the school had as many as 500 students when enrolment peaked in the 1950s.

The central government took over administration of the school in 1969, operating it as a residence for local students until 1978, when it was closed.

In 2015, the Truth and Reconciliation Commission of Canada – set up to examine the history and impact of the residential schools – reported that the system amounted to “cultural genocide”.

Wed Jun 2 , 2021
Support Village Voice News With a Donation of Your Choice. (BBC)Joe Biden has become the first sitting president to commemorate the 1921 Tulsa Massacre – one of the worst incidents of racial violence in US history. Mr Biden flew to Tulsa, Oklahoma, on Tuesday to mark the 100th anniversary of the attack, which claimed some 300 African-American lives. The two […]