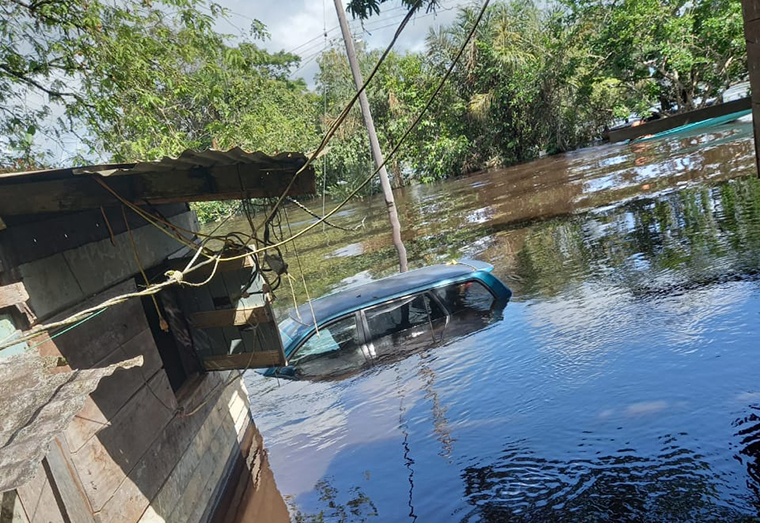 …Kwakwani residents at the mercy of floodwaters

By Naomi Marshall
Kwakwani located in Upper Berbice of Region 10 is currently submerged in water, and although this may be a yearly disaster for the community, the floodwater is at the highest level it has ever been.

Kwakwani Waterfront and Lamp Island are the two communities severely affected by the natural disaster, with houses and cars being covered by the deluge and families having to evacuate the area due to the severity of the flood.
In an interview with Village Voice News, the Vice Chairman of Region 10, Douglas Gittens stated that the flood is a result of heavy rain fall over the past weeks which caused a rise in the water level of the Upper Berbice River situated nearby.
According to Douglas, the communities have been experiencing floodwater at low levels since April of this year. However, certain areas are now flooded over eight feet high.

During a telephone interview, resident of Kwakwani, Loreen Austin related that the flood is affecting her gravely since more than half of her two-story house is covered in water.

Austin, a resident of the community for 43 years said, “it affecting me a whole lot because normally I do cooking as business and my whole downstairs in water which is where the kitchen is and I do not know if my freezers will last because I see the two freezers floating”.

Austin noted that the water began to rise rapidly on Thursday morning and has not lowered since then.
“From yesterday (Thursday) the water started to raise rapidly because when I wake up yesterday morning like after 1:00am I see how the water keep raising and by time 5:30am when I get up back I decided to go downstairs to check on the freezers. When I go is just to see the freezers floating and that is how quick the water raised and we did not have time to put up much things,” she recalled.

Austin noted that in the 43 years of being in the community she has never seen the floodwater high as it is presently.
Additionally, Austin noted that the residents were offered lands away from the river in the past by the government but persons were reluctant to relocate because they had already built houses and a life at the waterfront.
However, it seems as though the residents have had enough and is ready to relocate.

“On behalf of the residents of Kwakwani waterfront, I know in the past they have given out house lots but maybe persons did not take it so serious then. But I was talking to some other residents and we were saying that we would be glad if the government can come and open a new scheme or give out land where we can go away from the water,” Austin said.
Resident of Kwakwani, Tonesha Rogers and her family of seven was forced to evacuate their one-story house that has been covered by the floodwater. In seeing that the water was raising rapidly, the family attempted to remove some of the appliances and furniture from the house.

However, upon returning to the house for the remaining items, the Rogers family realised that their house was almost covered in water which prevented them from getting everything out of the house.

Rogers also called on the government to give more attention and assistance to the residents of the Kwakwani community.
“I would like the government to pay more attention to us because people are experiencing a lot of losses and we need their assistance. We are waiting on the water to go down but that would not be anytime soon because it is getting higher,” Rogers said.

Meanwhile, the Regional Vice Chairman told this publication that the poor condition of the Linden to Kwakwani road, the Regional Democratic Council (RDC) has been unable to go into the Kwakwani community.
Gittens noted that work was being done on the road, but due to the severe rainfall over the past weeks, the road has not been able to cure and is messy at the moment, resulting in cars and trucks being stuck on the road.
Despite the challenges, Gittens noted that the RDC have persons in Kwakwani assessing the situation and keeping the council informed.

On Thursday, the RDC organised for some of the residents to be evacuated and moved into the Kwakwani Primary School for safety and until the water recedes.

Additionally, Gittens said that there is a need for collaborative efforts between the RDC and the Government of Guyana in addressing the situation and giving assistance to the residents of Kwakwani.

“It is a natural disaster and there is a need for collaborative effort on the part of the RDC and Government of Guyana because almost everyone in the area needs help for a flood of that nature. They need food stuff, clothes and cleaning material,” he said.
The Vice Chairman went on to say that the RDC will continue put measures in place to ensure the comfort of the people of Kwakwani during this time Other communities affected by flooding in Region 10 are Silvertown and Speightland, among others.

Sat May 29 , 2021
Support Village Voice News With a Donation of Your Choice. Two men were killed at Three Friends Mines Coomacka in the Upper Demerara, Berbice Region early Saturday morning. Dead are: Leonard Reec unemployed and Ronald aged 36 years of the same area. Enquiries disclosed that during the month of April 2021 Ronald Wong was released from prison after he was […]