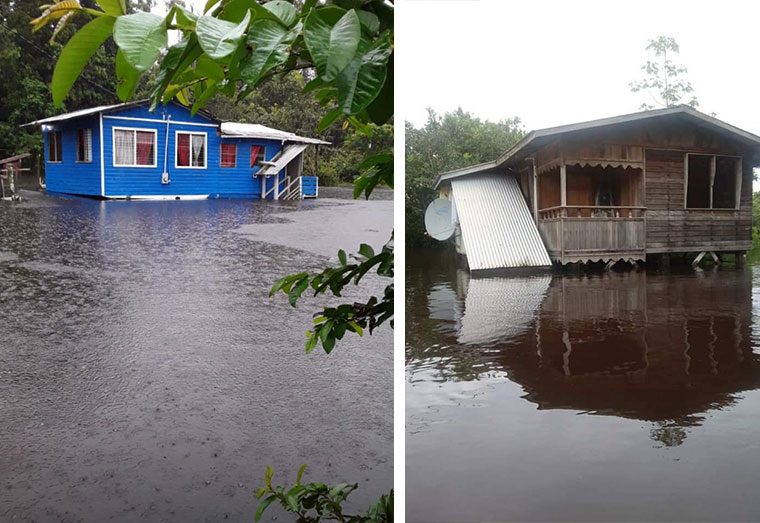 Continuous rainfall over the past week along with high tides have resulted in flooding in Regions 1, 2, 3, 4, 5, 6, 7, 9 and 10 and the Opposition Leader, Joseph Harmon has blamed this on the government.

In a statement Harmon said: “There has been disruption to lives and livelihoods, considerable damage to property and loss of crops and livestock.

A public health crisis is developing with dead livestock rotting in the flood waters in a number of areas.”

“The APNU+AFC Coalition empathises with the thousands of persons who have been adversely affected and asks that you take all necessary precautions to ensure you remain safe from contracting potential illness or disease as a result of exposure to the flood waters,” Harmon said.

While the Civil Defence Commission has been responding, such response is insufficient and inadequate, Harmon said adding that thousands of citizens who have been adversely affected and who are trapped in the flood waters are in dire need of urgent relief and assistance.

“People are suffering from extreme flooding, including in areas which have not been known to be prone to flooding, in significant part, as a result of the PPP regime’s lack of maintenance of flood prevention infrastructure left in place by the APNU+AFC Coalition Government.

The PPP’s neglect of such infrastructure has now imperiled the lives of thousands of Guyanese, have destroyed thousands of acres of crops and have caused millions of dollars of damage to property and loss of household appliances and other items.

We call on the PPP regime to immediately establish a National Flood Relief Task Force comprising representatives of all sectors of the society and to take decisive action to:

Sat May 29 , 2021
Support Village Voice News With a Donation of Your Choice. President Irfaan rfaan Ali has assured residents of Mahaicony Creek, Region Five, that his Government would work around the clock to ensure that Guyanese affected by flooding caused by persistent heavy rainfall are kept safe and provided with essential supplies. The President and a small team of officials, including Minister […]