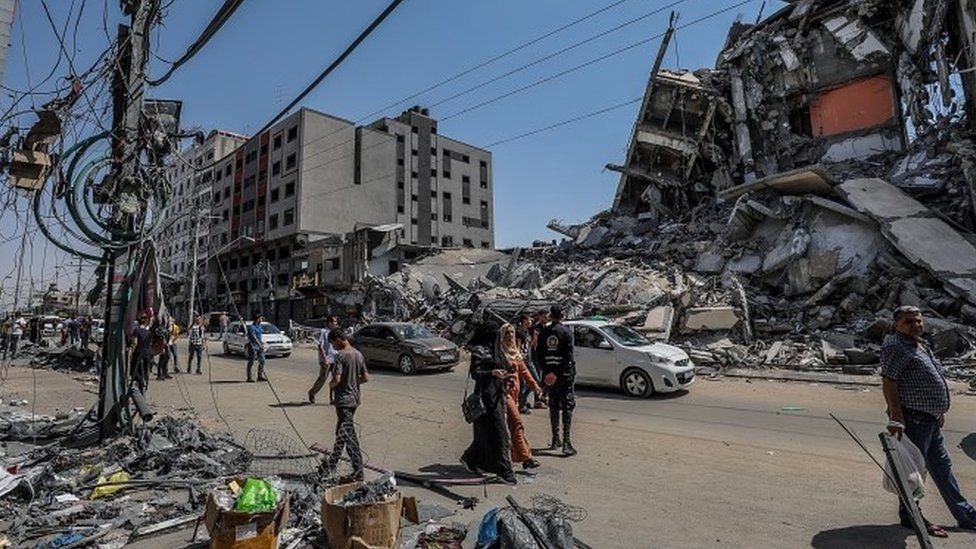 BBC – As Gaza and Israel emerge from 11 days of conflict, mediators are seeking to cement the truce and prevent more violence in the longer term.

An Egyptian team was in Israel on Saturday, while the US Secretary of State Antony Blinken could visit the region next week.

Both Israel and the Palestinian militant group Hamas have claimed victory in the latest conflict.

More than 250 people were killed, most of them in Gaza.

The fighting began on 10 May after weeks of rising tension that culminated in clashes at al-Aqsa, a holy site revered by both Muslims and Jews, in occupied East Jerusalem. Hamas began firing rockets after warning Israel to withdraw from the site, triggering retaliatory air strikes.

Since the truce was declared, Israeli PM Benjamin Netanyahu has said the degrading of Hamas’s military power by air bombardment was an “exceptional success”.

He added: “If Hamas thinks we will tolerate a drizzle of rockets, it is wrong” and pledged a “new level of force” in response.

Meanwhile, Hamas has spoken of what it called the “euphoria of victory” and its leader Ismail Haniyeh said the conflict had “opened the door to new phases that will witness many victories”.

The truce was into its second day on Saturday and was holding. Its terms are unclear. Israel simply said it had agreed to a “mutual and unconditional” cessation of hostilities.

Egypt, Qatar, the US and UN appear to have been involved.

On Saturday, the UN Security Council issued its first statement on the conflict, praising the mediators and calling for a “full adherence to the ceasefire”.

Teams of Egyptian mediators were on Saturday in discussion with the Israeli government, and with Palestinian leaders in both Gaza and the occupied West Bank.

An Egyptian diplomat said the teams were implementing agreed-on measures and trying to prevent practices that led to the latest fighting, but there was no detail.

Mr Blinken is expected to visit the region next week. The itinerary has not been released but a US source said he would travel to Israel and the West Bank on Wednesday and Thursday. He may visit Egypt and Jordan. The US will not hold direct talks with Hamas, which it regards as a terrorist organisation.

However, most analysts believe the prospects of avoiding more violence appear bleak.

The BBC’s Tom Bateman, who has been in Gaza, says that, although the calm has been welcomed there, most people know it probably just means a countdown to the next inevitable conflict.

Civilians on both sides have spoken of wanting to live without the fear of attack from the air.

But many are not confident. One shop owner in Gaza, Ashraf Abu Mohammad, told Associated Press: “Life will return, because this is not the first war, and it will not be the last war.”

The first convoys of humanitarian aid have arrived in Gaza. More lorries arrived at Israel’s Kerem Shalom crossing on Saturday and a 130-vehicle convoy was scheduled to cross from Egypt.

But the World Health Organization has said Gaza’s health facilities are in danger of being overwhelmed by thousands of injured people.

Lynn Hastings, the UN’s humanitarian co-ordinator for the Palestinian territories, said from Gaza City she hoped that calm would remain.

But she had spoken to families and “they feel that they have no control of their lives and their situation is, one woman said, helpless”.

For about 14 years, Gaza has been under a blockade on its borders with Israel and Egypt that restricts the passage of people and goods – one of the main issues for any future mediation.

Israel says it must limit Hamas’s access to weapons, as the militants refuse to disarm. The UN says the blockade must end for Gaza’s economy to improve.

Flashpoints in Jerusalem could also complicate the ceasefire. Hamas has told the BBC that part of the agreed truce involved Israel compromises over al-Aqsa and the district of Sheikh Jarrah, where there have been moves by Jewish settlers to evict Palestinian families.

Israel has denied this is the case and the issues remain. There were clashes in East Jerusalem on Friday after the truce started.

Some of the chants of Palestinians there highlighted another major issue – the rivalry between Hamas and the Palestinian Authority, which is led by Mahmoud Abbas and runs parts of the West Bank.

Crowds chanted “the people want the president to leave”. Mr Abbas will try to shore up his position when he meets Mr Blinken.

Some international leaders, including US President Joe Biden, have again referred to the long-term, two-state solution for the Middle East – a Palestinian state alongside Israel – but maintaining the current calm is the main focus at the moment.

Sun May 23 , 2021
Support Village Voice News With a Donation of Your Choice. (SPORTS MAX) Atletico Madrid are champions of Spain again after holding off heavyweight pair Real Madrid and Barcelona in the closing stages to win their second LaLiga crown in eight seasons. Atleti beat Real Valladolid 2-1 on Saturday to finish two points above Madrid – the only side that could catch them heading into […]