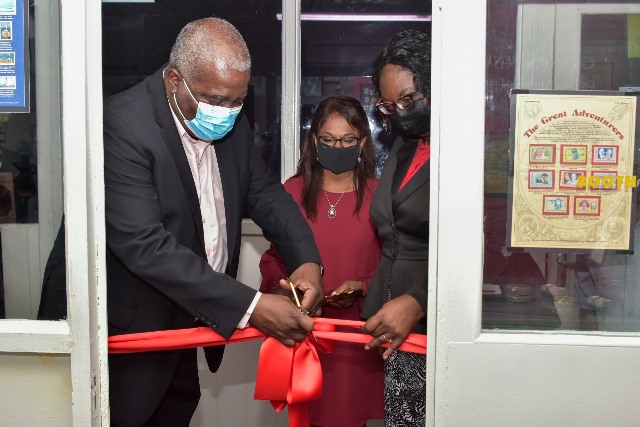 The Library, which is dedicated to books about stamps, is a project of the Guyana Philatelic Society (GPS), in collaboration with the GPOC, the Department of Public Information said in a release.

During his remarks, the Prime Minister said that the GPOC through its Philatelic Bureau, will continue to partner with the GPS to promote philately (the collecting or studying of stamps as a hobby) in Guyana.

“The GPS has worked closely with the Guyana Post Office Corporation’s Philatelic Bureau over the years to host stamp exhibitions and even as the GPOC continues to improve its services to ensure that it remains relevant in this day and age, so too will it continue to work with the GPS to promulgate the interest of philately in Guyana”.

The Prime Minister added that although the use of postage stamps has diminished through the advent of digital communication, Guyana has a rich philatelic history, of which more Guyanese should be aware.

“Our country’s history has long been told through postage stamps, including the British Guiana One Cent Magenta which is regarded as the most famous and rare stamp in the world—valued at over US$9.4 million”.
President of GPS, Ann Wood, said that the Library is committed to promoting and facilitating the pursuit of stamp collecting.

She said that membership is not necessary to gain access to the library or its resources.
Postmistress General, Karen Brown and Chief Education Officer, Dr Marcel Hutson were also at the launch.

'This is your court'

Fri May 21 , 2021
Support Village Voice News With a Donation of Your Choice. …Chancellor tells Barticans as $177M Magistrate’s Court opens in township  The  Supreme Court on Thursday commissioned the $177M Battica Magistrate’s Court, which Chancellor of the Judiciary (ag) Justice Yonette Cummings- Edwards described as the ” the people’s court.” She said the Cuyuni-Mazaruni region will have its first resident magistrate, which […]