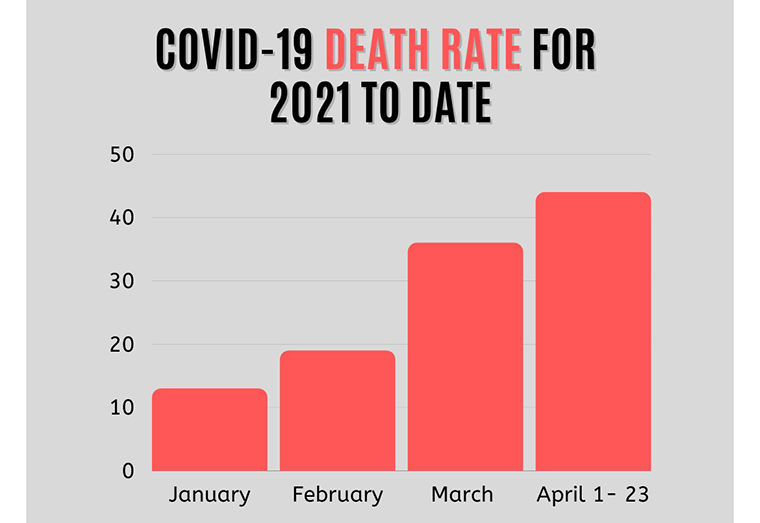 The year 2021 has taken on a troubling trend with higher COVID-19 deaths in Guyana each month as time progresses. There were 13 COVID-19 deaths in January; 19 in February; 36 in March and, now, already 44 recorded as of April 23, with still more days in the month to go.

At the beginning of April, the Village Voice News had reported that the first 7 days of the month were not off to a good start with 19 deaths being recorded, just as many as February. The next 7 days saw 11 deaths and the following 7 days saw 14 deaths.
Press releases sent out by the Ministry of Health announced a whopping six deaths for April 3 and four deaths for April 15. Apart from this, there were triple deaths announced on April 4, 6, 10, 14, 17 and 21. There were double deaths on April 1, 2, 7, 11, 13 and 19 and there were single deaths on April 5, 12, 16 and 20.

The youngest person to die for the month of April thus far was 26 while the oldest thus far was 94. In general, local cases to date have surpassed 12,000 while recoveries lag close behind at over 10,500. Region Four remains the Region with the highest number of cases to date at over 5,000. The Region has over 4,000 more cases than Regions 1 and 3 which have seen just over 1,000 cases individually.

Sat Apr 24 , 2021
Support Village Voice News With a Donation of Your Choice. Vice President, Bharrat Jagdeo on Friday announced a six-month pay increase for sugar workers totaling $200M during meeting with them and their un ion leaders. Sugar workers have staged countrywide strike action against the top-heavy GuySuco management over outstanding wages and salaries dating back to 2019. Jagdeo engaged the General […]