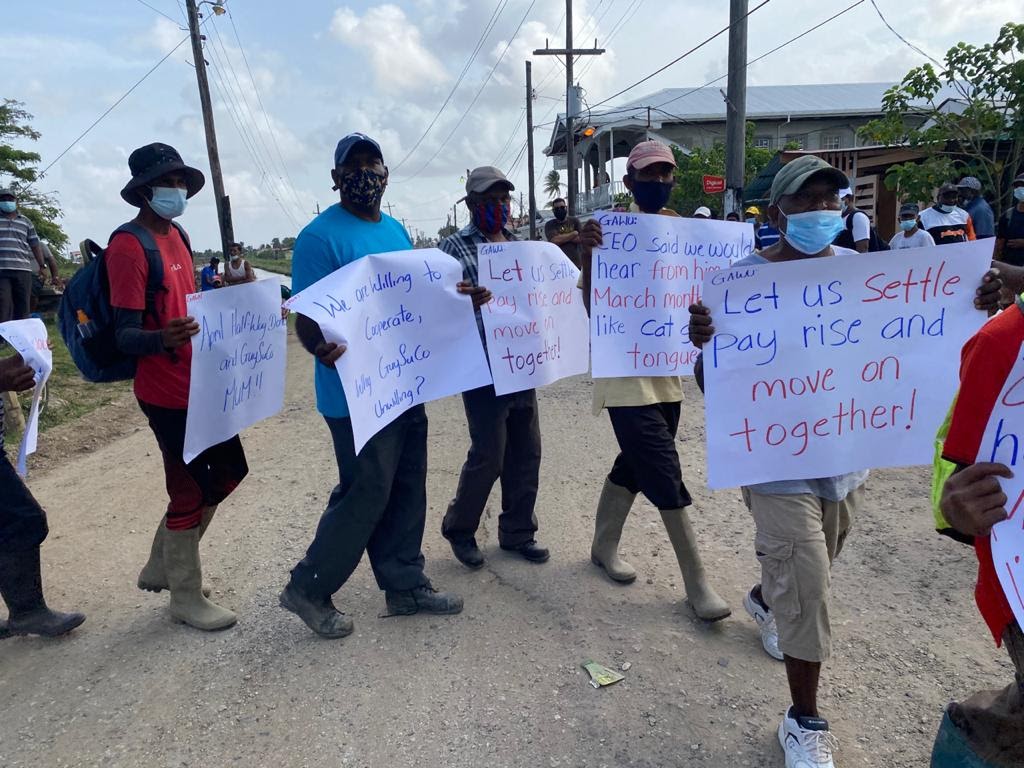 Workers of Uitvlugt Estate on Friday morning took part in a picketing exercise calling on the Guyana Sugar Corporation Inc (GuySuCo) to resume discussions on the wage/salary improvements for the period 2019 to 2021.

When the GAWU and the GuySuCo last met to address the issue on March 09, 2021, the parties left with the unambiguous understanding that the Corporation would inform the Union of its position by the end of March 2021. GAWU said, having not heard from the sugar company, on April 09, 2021 it wrote the company seeking to hear from the Corporation. “At this time, the GuySuCo has not even acknowledged the Union’s correspondence,” GAWU said in a statement.

The workers held that the GuySuCo was disrespectful to them and the Union. They shared that GuySuCo has boasted of massive investments in the fields and factories but there is no such boisterousness when it comes to addressing the plight of the workers. The workers contended in as much as the Corporation recognised the need for investment in its physical assets, its human assets also required some level of investment as well.

According to the GAWU release, the workers also lamented that as a result the pay freeze they suffered during the term of the Coalition; some workers were earning just above the national minimum wage. This they said was hardly sufficient to take care of their families. Workers shared that they recognized the plight of the Corporation and were in empathy but nonetheless believed that something should be done to at least alleviate their situation as efforts are furthered to turn the industry around. Key to the success of the industry’s climb from the doldrums is a motivated and committed workforce.

The workers also pointed to a recent interview of the Corporation’s CEO which appeared in the Guyana Chronicle. They said they were pleased to learn that the GuySuCo is seeking to sell sugar at higher prices. They welcomed the initiatives and are hopeful that even greater quantities of sugar can be sold in the new markets touted. Workers held that their efforts are partially responsible for the improvements heralded and they ought to receive some due reward for their contributions.

The Union, for its part said it remains open to frank discussions with the Corporation. The GAWU and the workers are eager to find an amicable settlement that it fair to all sides. It is our belief that a settlement could be within reach, but it requires an open mind on all sides. We believe at this time no stone should be unturned as the workers, the Union and the Corporation put their best foot forward to reinvigorating the sugar industry.

Sat Apr 17 , 2021
Support Village Voice News With a Donation of Your Choice. Announcement by the Government that the COVID-19 vaccination exercise is resulting in more people being vaccinated is encouraging given the urging by the World Health Organisation (WHO). Guyana has been the beneficiary of donated vaccines from several sources, including the WHO’s COVAX-run programme, Barbados, Russia and India. Thus far the […]