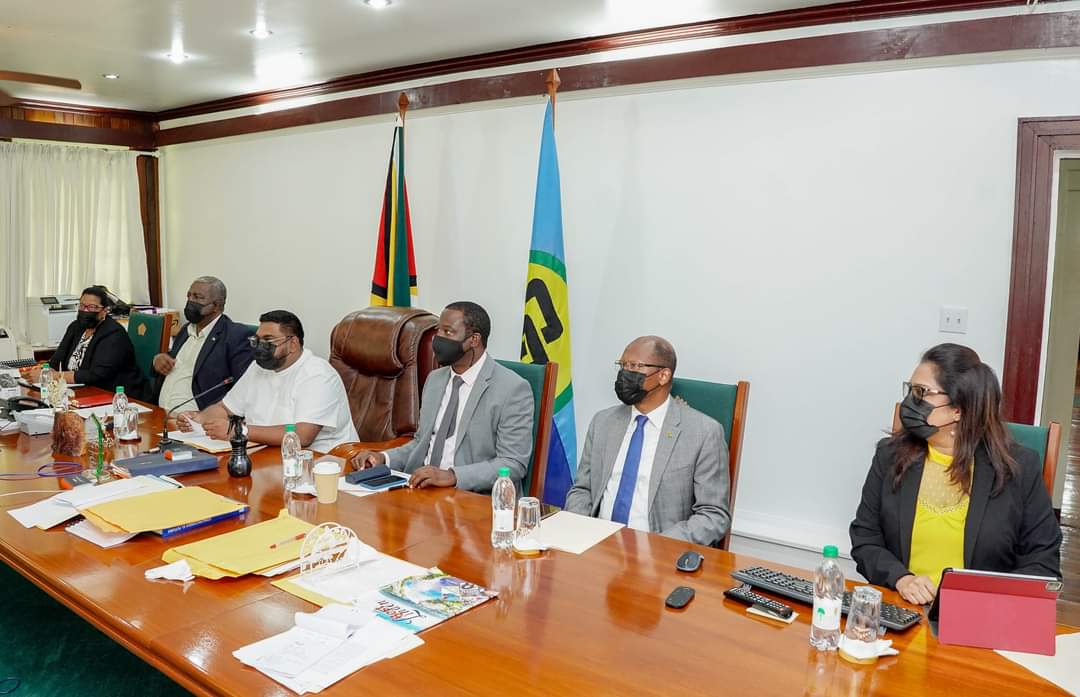 Heads of Government of the Caribbean Community (CARICOM) met in a Special Emergency session on Thursday to discuss the situation in St Vincent and the Grenadines caused by the on-going volcanic eruptions of La Soufriere.
They committed to continue providing extensive support to St Vincent and the Grenadines and pledged solidarity with that Member State as it strove to cope with the disaster, Caricom said in a statement. The volcano erupted on Friday 9 April and has been spewing ash and emitting pyroclastic flows.
Dr Ralph Gonsalves, Prime Minister of St Vincent and the Grenadines briefed his colleague Leaders on the situation at the meeting which was held virtually. It was presided over by the Chair of the Conference of Heads of Government Dr Keith Rowley, Prime Minister of Trinidad and Tobago. The meeting also received information from the Caribbean Disaster Emergency Management Agency (CDEMA) which is co-ordinating the regional response to the event.
Heads of Government were informed that the situation would be prolonged given the level of uncertainty in respect of the behaviour of the volcano.
Prime Minister Gonsalves reported that more than 10,000 people had been evacuated from the immediate disaster area covering approximately one third of the island. They are being housed in shelters and at homes of family and friends. Accommodation for evacuees is also being arranged by neighbouring States.
The ash and the pyroclastic flows have decimated crops and vegetation and compromised water sources. Food and water were identified as among the primary needs.
Member States indicated the level of support that had already been delivered and committed to providing further financial, technical and material support, in particular food and water. Security assistance is also being provided.
Mia Mottley, Prime Minister of Barbados alerted the meeting to the effects of the unprecedented heavy ashfall across that island which has resulted in major disruptions to the infrastructure including the closure of the Grantley Adams International Airport with an adverse effect on the tourism sector and the wider economy. Heads of Government pledged their support and solidarity with Barbados in treating with this significant challenge.
Prime Minister Gonsalves thanked his colleague Heads of Government and the Regional Institutions for their overwhelming support. He praised the work of the University of the West Indies Seismic Research Centre (SRC) which has been monitoring the volcano and expressed his deep appreciation for the efforts of CDEMA, the Regional Security System (RSS), the Caribbean Public Health Agency (CARPHA) and the CARICOM Implementation Agency for Crime and Security (IMPACS) in assisting the country.

Meanwhile, President Irfaan Ali also addressed the meeting during which he assured Prime Minister Gonsalves that Guyana was fully committed to assisting the people of St Vincent and the Grenadines not only in the immediate period, but also the medium and long term.

Ali informed the meeting that a vessel had already departed with 350 tonnes of varied needs including water, water storage containers, sugar, rice, peas, chowmein, sanitisers, detergents, disinfectant, personal care items and supplies for infants. That vessel was due to arrive in St Vincent and the Grenadines on Saturday. A twenty-foot container of water also left on a Tropical Shipping vessel today. Another shipment of items was being prepared for departure on Monday April 19 that would include water, sugar, rice, assorted food items and personal care and hygiene items. President Ali also committed to sending a further 50 water tanks to St Vincent and the Grenadines and 50 water tanks to Barbados in response to an appeal from Prime Minister Mia Mottley.
President Ali said that the Government had received immense support from the private sector which had mobilised financial resources. It was the Government’s intention to supplement this.
Ali was accompanied by Prime Minister, Hon Brigadier (ret’d) Mark Phillips, Hon. Hugh Todd, Minister of Foreign Affairs and International Cooperation, Ambassador Elisabeth Harper, Permanent Secretary, Ms Marcia Nadir-Sharma, Cabinet Secretary Acting, and Ambassador George Talbot, Director of Department of the Americas, Ministry of Foreign Affairs.

AFC concerned about spike in crime

Fri Apr 16 , 2021
Support Village Voice News With a Donation of Your Choice. …calls for weeding out of rogue cops  The Alliamce For Change (AFC) says it finds the current upsurge in crimes across the country, ranging from petty theft to domestic violence to an execution type murder, as extremely worrying. Speaking at a news conference on Thursday AFC leader and former Public […]