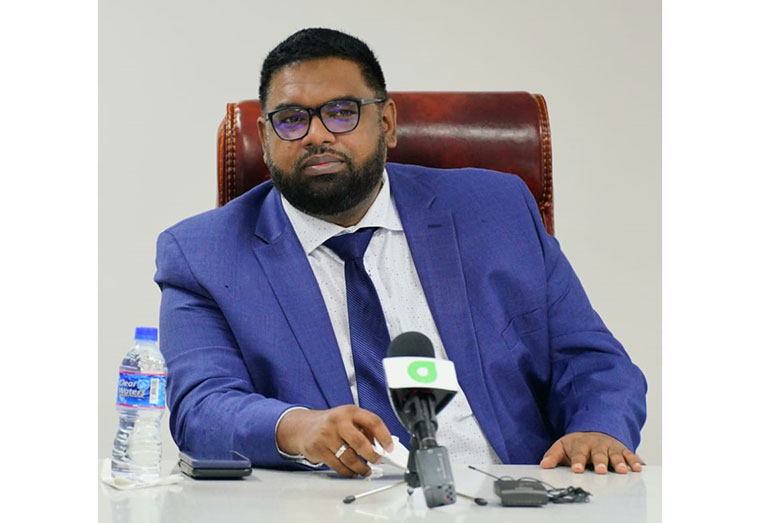 President Dr Irfaan Ali said that Guyanese need to understand that the COVID-19 pandemic can only be managed appropriately if persons act responsibly.

“…The people have a responsibility too. Guyanese have to understand this is not a joke; this is their lives they are playing with.”

President Ali made the statement following the Local Government Commission’s swearing-in ceremony on Friday while fielding questions from the media.

The Head of State noted that the COVID-19 Task Force has greatly increased their efforts by carrying out more aggressive patrols aimed at persons breaching the guidelines.

“The only other thing now is to have the courts play a role in sentencing people, but we have really stepped up. The Task Force is doing a good job. They are out there every single night until three to four in the morning.”

The President pointed to the importance of persons understanding how their actions will impact the lives of others.

President Ali related his disappointment at how persons have been reacting to the Task Force rounding up defaulters of the regulations.

“If you look at the army bus the other night—I see responsible people sharing this on social media as if it is some big joke. The reckless behaviour in that bus—and people who I hold with great levels of responsibility and high levels of education sharing it as if it was a joke.”

The Head of State emphasised that Guyanese need to understand that the pandemic can only be managed if we all act responsibly.

“If the Police tomorrow picks up 300 persons and take them to the station then you have another problem because they will go there and overcrowd the station and we have more difficulties. So at the end of the day, we have to act as a collective. We are behaving sometimes as if this pandemic doesn’t exist.”

The President noted that some other countries are dealing with multiple issues. He referenced St Vincent and the Grenadines, who are currently dealing with the eruption of its La Soufrière volcano along with the pandemic.

President Ali added that if Guyanese follow the stipulated guidelines the country can turn the tide against the pandemic.

“Why can’t we understand that we all have to act in a responsible manner, and that is all we are asking for.”

A vaccination drive has also resulted in the inoculation of over 60,000 persons to date. (DPI)

Tue Apr 13 , 2021
Support Village Voice News With a Donation of Your Choice. … items include food supplies President Irfaan Ali said that the support for CARICOM sister nation, St Vincent and the Grenadines, will  be continuous and that Guyana is currently mobilising a few hundred tonnes of requested items that will soon be shipped. “This will be continuous support. What St Vincent is […]