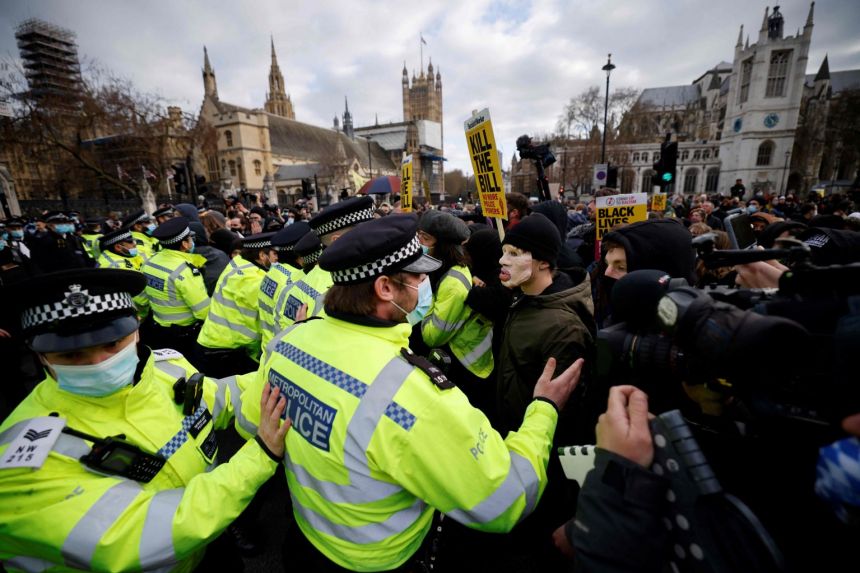 LONDON (Reuters) -Thousands of demonstrators joined rallies across Britain on Saturday against a proposed law that would give police extra powers to curb protests, with some scuffles breaking out following a march in London.

The Police, Crime, Sentencing and Courts bill aims to toughen measures officers can take to disperse demonstrations, such as imposing time and noise limits, which campaigners and activists fear would be used to curb dissent.

“Kill the bill” marches were held in dozens of towns and cities, supported by big campaign groups such as climate change campaigners Extinction Rebellion and the Black Lives Matter movement.

Nearly all passed off peacefully but there were minor clashes in central London between protesters and police following a rally attended by several thousand people.

“The policing operation in central London has now moved to the enforcement stage and arrests are being made,” said London’s Metropolitan Police on Twitter. The force deployed a large number of officers in the capital to bring the protest to an end.

The new bill follows actions by Extinction Rebellion which paralysed parts of London in early 2019 and fuelled calls from some politicians for the police to be given tougher powers to prevent excessive disruption.

Since the proposed law was brought before parliament last month, there have been sporadic demonstrations across the country, with Saturday’s rallies being part of what organisers said was a national weekend of action.

“(I’m here) to defend the rights of free speech, and the rights of organisations in our society,” said Jeremy Corbyn, former leader of the opposition Labour Party, who was among those who took part in the London protest.

“These demonstrations, 50 of them today, will make a difference,” he told Reuters opposite the Houses of Parliament.

Much of the protest so far has been focused in the southwestern English city of Bristol, where some demonstrations have turned violent with officers bombarded with missiles and police vehicles set on fire, which Prime Minister Boris Johnson described as “disgraceful attacks”.

A large crowd gathered again in Bristol on Saturday evening, although the rally there was peaceful. Some senior officers have said the “kill the bill” tag was deliberately provocative as “the bill” is a nickname in Britain for the police.

Sun Apr 4 , 2021
Support Village Voice News With a Donation of Your Choice. (Reuters) -Myanmar security forces opened fire on pro-democracy protests on Saturday killing at least five people, a protester and media said, as the military stepped up its bid to stifle dissent with arrest warrants for a further 20 high-profile critics. Despite the killing of more than 550 people by the […] 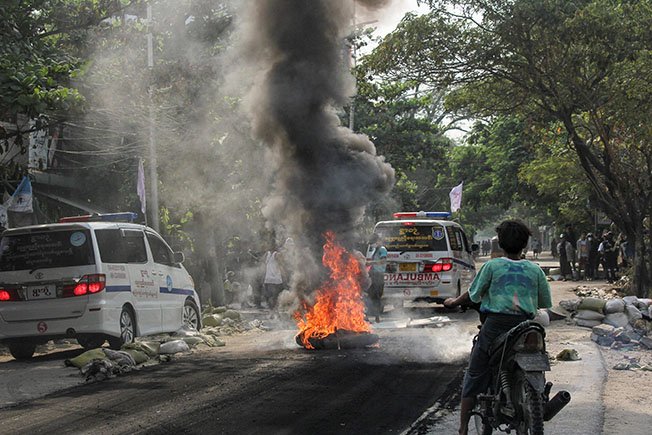