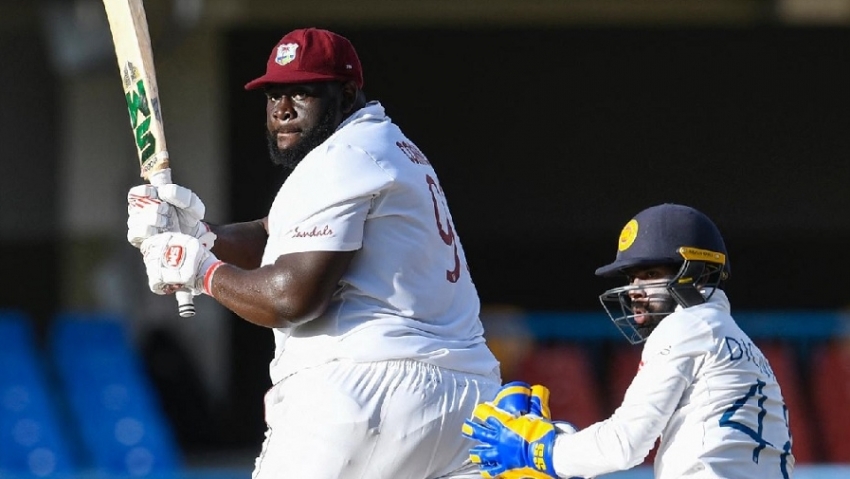 (SPORTS MAX) A 90-run eighth-wicket partnership between Rahkeem Cornwall and Joshua Da Silva gave the West Indies a 99-run lead and a nice cushion over Sri Lanka at stumps on the second day of the first Test at the Sir Vivian Richards Stadium in Antigua.

Cornwall was unbeaten on 60, his first half-century in Test cricket as the West Indies closed the day on 268 for 8 in reply to Sri Lanka’s 169. Kemar Roach is on four, the two have added seven runs for the ninth wicket so far and will be hoping to add a few more come tomorrow.

Cornwall and da Silva came together after Suranga Lakmal had bowled Jason Holder for 19 for his fifth wicket of the match and have the West Indies at 171 for 7, just two runs ahead of Sri Lanka’s first innings total. However, by the time da Silva got out caught behind for 46 trying to uppercut Dushmantha Chameera, they had stretched the lead to a healthy 91. Cornwall’s innings was a mix of stern defence and big-hitting for his highest Test score that included nine fours and two sixes and seemed at ease against both pace and spin.

Da Silva, who playing in just his fourth Test, featured in yet another lower-order recovery for the West Indies, was more sedate soaking up deliveries while wearing down the Sri Lankan bowlers. His 46 took 124 deliveries from which he hit five fours.

It was a welcome partnership for the West Indies, who were restricted by some disciplined bowling from the Sri Lankans. A number of their batsmen got starts but each failed to carry on, pried out by penetrative bowling from Lakmal, who exhibited accurate pace and swing while claiming the wickets of Brathwaite for 3, Mayers for 45, Jermaine Blackwood for 2, Alzarri Joseph for a duck and Jason Holder to return figures of 5-45. Chameera also claimed the wicket of John Campbell for 42 to end with 2-71.

Laws, constitutions or reforms will mean very little unless the men and women who are placed at the helm are morally erect

Tue Mar 23 , 2021
Support Village Voice News With a Donation of Your Choice. Dear Editor, Over the past few months, articles and editorials particularly in the Stabroek News and Kaieteur News have dealt with the daunting questions of electoral reform with expectations that our racial divide and political polarization can be solved by adjustments legal and otherwise of electoral system. They all expect […]