Ambassador of the EU Delegation to Guyana, Fernando Ponz Cantó, in announcing the payment of $19.8B under the EU Budget Support Programme, expressed that the hope that the money will be used to further advance inclusive and sustainable development in the country.

Ambassador Cantó made the announcement together with President Irfaan Ali during a joint press conference at the Ambassador’s residence on Thursday. The EU Ambassador said the budgetary support is a major contribution to the inclusive and sustainable development of the country, as well as its fiscal space, in the context of an unprecedented Coronavirus Disease (COVID-19) crisis.

The overall amount of the EU budget support for the Integrated Coastal Management Project (2017-2021) is G$74.5B, however, this latest payment brings the total grant funds released since 2017 to $51.6B.

While some are of the opinion that because Guyana is now an oil producing nation it does not require multilateral financial support, the EU Ambassador said that is not the case, as he pointed to the need for a bridging period.

“I hope and I trust that this contribution would help Guyana to address the challenges it faces, but also to make the most of the opportunities,” Ambassador Cantó said, noting that the country faces challenges in relation to governance, constitutional reform, electoral reform, citizen security, human rights and the fight against organized crime among others. He assured that as the country moves to address these challenges, the EU will remain firmly by it side.

In his opening remarks, President Ali lauded the sizeable contribution by the European Union under its Budget Support Programme. He noted that the grant is being offered at a time when Guyana and other countries are facing tremendous social and economic hardships posed by the COVID-19 pandemic. He said as a result there has been a global call for the rescheduling of loans and loan payments.

Like the EU Ambassador, the Head of State underscored the need for diversification as well as economic strengthening, which will ensure that the base of the economy is not “a one pillar foundation.” Such a move, he posited will widen the economic profile and the revenue base of the country and cushion the impacts of economic shocks should they occur.

Meanwhile, Senior Minister in the Office of the President (OP) with responsibility for Finance, Dr Ashni Singh said pre-2015, the then People’s Progressive Party/Civic (PPP/C) Administration had done significant work to ensure Guyana to continues to meet the eligibility criteria to access finances under the Budget Support Programme. He explained that it was important for the country to meet certain prerequisites with respect to good governance, macroeconomic stability, fiscal oversight and good and strong public financial management for general eligibility for budget support.

“On the last occasion when we were in government prior to 2015, we set about a task of ensuring that Guyana remains eligible by ensuring that we have all of these prerequisites in place, and I dare say that we performed very well,” the Finance Minister said.

However, he said the country had difficulties accessing the grant following the No-Confidence Motion in December 2018 as a result of the political crisis it was facing.

“It is extremely unfortunate that our country was found in a situation where we were unable to secure this disbursement because of the absence of parliamentary oversight,” Dr. Singh explained.

The EU Budget Support Programme titled ‘Integrated Coastal Zone Management,’ is intended to support climate change adaptation through an integrated coastal zone management approach, in an effort to protect the population in vulnerable, flood prone areas under sea level. Guyana has benefitted from a number of EU support projects and programmes in the sea and river defence sector since the late 1970s. The main activities are to develop, reinforce and improve: an integrated coastal zone management legal framework; aid in the implementation of disaster risk management and resilience policy at regional and community levels and support preventative maintenance and risk management of the sea defence.

“The programme is also contributing to progress in gender equality as a targeted cross-cutting issue. Women’s increased participation in decision-making processes on climate and environmental issues has been achieved through enlarged representation on the sea and river defence board. Additionally, measures to promote girls and women in science, technology and engineering have been undertaken,” the EU Delegation said in a statement.

Sun Dec 13 , 2020
Support Village Voice News With a Donation of Your Choice. By Clifford Stanley Gyan Totaram of Good Faith Mahaicony was a toddler in 1974  when his father bought a Morris Minor 1000 car registration number  PL 114. The iconic British made car had been manufactured in 1956 eighteen years before and his  father Khemraj Totaram was the third owner. And […] 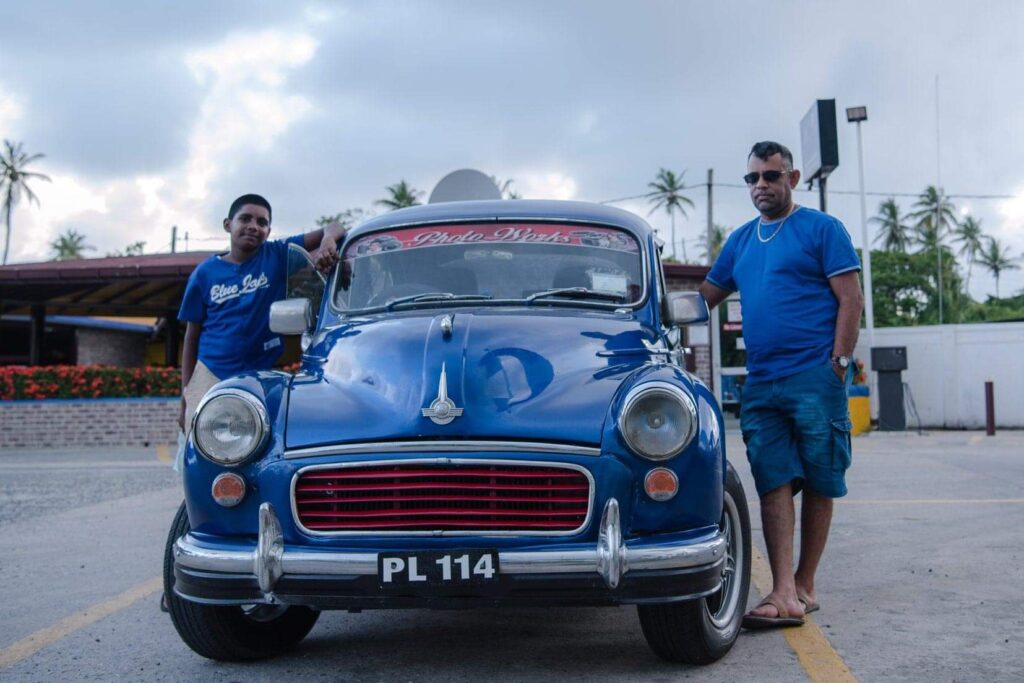