Medical teams will be in Aranka and surrounding mining areas in Region Seven, as well as Moruca in Region One in coming days to tackle the sudden spike of COVID-19 cases in these areas. The teams will leave on Sunday, July 5th, 2020.

As this is taking place a mandatory lockdown will be imposed on both areas. This will allow the health team to conduct mass screening and testing of individuals living and working in these areas.

Agencies collaborating with the Public Health Ministry to ensure this process is conducted effectively include the Guyana Geology and Mines Commission (GGMC), the Civil Defense Commission (CDC), the Ministry of Indigenous Peoples’ Affairs, the Guyana Police Force (GPF) and the Guyana Defense Force (GDF), Regional Democratic Councils and Health Emergency Committees of Regions One and Seven among others.

While under lockdown, no one will be allowed in or out of these areas for one month, commencing July 6 to August 3, 2020.

The Minister of Public Health, Volda Lawrence has noted that the medical teams g of doctors, nurses, sanitisation staff and surveillance teams will all be doing their part to identify and isolate positive cases while quarantining contacts and monitoring their conditions.

“The incubation period for this virus can range from 14 days to 31 days so we will do mass testing. We will be able to identify those persons who are sharing the disease because our rate of transmission is for every one person who gets the disease, they infect three persons. Therefore, the mass testing can pull in those people who are ‘shedding’ and they don’t even know it,” Minister Lawrence told DPI.

Shedding is the term used for persons who are unaware of their positive status and are infecting others who they come into contact with. It noted that populations in these areas are small and are often on the move hence the need for a lockdown.

The lockdown or as the Health Minister terms it a ‘cease order’ will stop mining operation especially in Aranka. It will also put a halt to border crossings which are frequent in this area.

“We are locking down for a month and there will be a cessation of business in there which is largely to stop the mining…. There is a lot of employment of migrants in these areas, in forestry, in mining and they are coming and going; that is why we are moving to close down the mines.”

Additionally, while a large number of positive cases have not manifested respiratory symptoms such as a cough, difficulty breathing or other flu-like symptoms, persons have experienced other signs which continuous research indicates is due to COVID-19.

“People may think they ate something bad and have diarrhoea or a constant headache but they might be infected,” Minister Lawrence said.

As a result of these symptoms, persons in these areas have tended to self-medicate, unaware that they might have been exposed to COVID-19 and have become a carrier of the virus.

“This is why we are carrying out extensive research because we noticed people are reacting differently to the disease. We are looking at all factors,” the Health Minister added.

She also pointed to the fact that many coastlanders work in the mining areas and in the absence of a lockdown and mass testing measures, the risk of more persons being infected on the coast is inevitable.

“The objective is to stem the spread of the disease in there and stop it from coming out, going beyond that cluster area. As it is right now it is a community cluster.”

Minister Lawrence emphasised that the Health Ministry is taking all necessary steps to save lives and called on the business in those areas to support the effort to stop the spread of the virus.

Sat Jul 4 , 2020
Support Village Voice News With a Donation of Your Choice. By Akeasha Boodie Officials in Santa Rosa, a village in Moruca, Region One (Barima-Waini) have implemented a 14-day lockdown in the community in light of the increasing novel coronavirus (COVID-19) cases in the area. Toshao of Moruca, Wuanita Philips said residents in the area have presented a carefree attitude towards […] 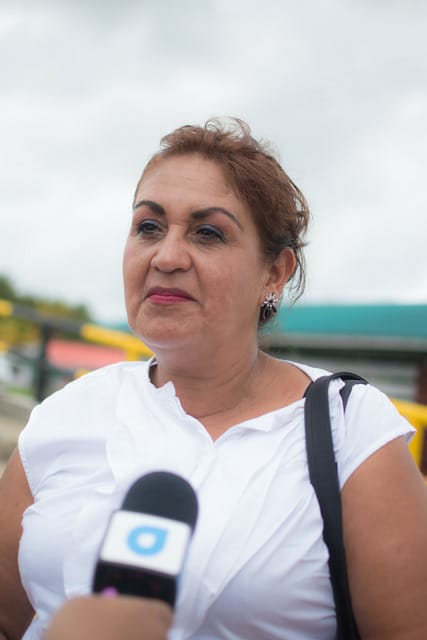