The early morning inferno that killed three siblings at Mocha was electrical in nature, according to the Guyana Fire Service; however, the children’s mother abusive ex-partner, who had reportedly threatened to kill her and burn down her home, has been taken into police custody.

“Investigations revealed that the fire was electrical in nature,” the Guyana Fire Service said in a statement Thursday afternoon.

According to the Fire Service, it received a call at 01:25hrs indicating that there was a fire at 10 Field Barnwell Mocha, East Bank Demerara. 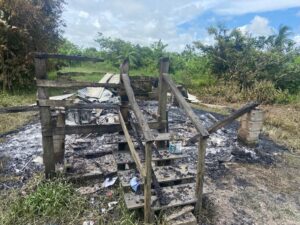 Two fire tenders were immediately dispatched – Water Tenders #95 from the Diamond Fire Station and #107 from the West Ruimveldt Fire Station – however, they were unable to access the scene of the fire.

“The first water tender arrived on the scene at 1:42 hours but was unable to access the home, which was already entirely engulfed by the fire, due to the deplorable state of the dam,” the Fire Service explained.

At the time, three children were trapped in the burning, one-storey wooden building. Their mother, Tracy Flue, a security guard, was at work.

In expressing condolences to the family and friends of the children, the Fire Service pleaded with citizens to take the necessary precautions to avoid fire emergencies.

“Citizens are advised to not leave children unattended or at home without adult supervision. Do not leave cooking unattended and ensure stoves are properly turned off when not in use. Keep children away from the cooking area and ensure matches and lighters are out of reach of children. Make use of fire prevention and firefighting devices such as smoke detectors and fire extinguishers,” the Fire Service urged.

Meanwhile, Tracy Flue’s abusive ex-partner, who had threatened to kill her and burn her home down, has been taken into police custody.

The man, Junior Cedric Dey known as ‘Trini’ was arrested hours after the Guyana Police Force issued a wanted bulletin for him.

He is reportedly being questioned in relation to the fire. Reports indicate that Tracy Flue had taken a restraining order against Dey, however, he would still frequent the area, issuing threats.

Hours before the tragic incident, the man reportedly called the woman, however, his calls went unanswered. He was reportedly seen running from the area last evening.

South Ruimveldt roads need to be repaired now that 4-lane highway has been completed; no street lights a risk to residents

Sat May 28 , 2022
Support Village Voice News With a Donation of Your Choice. Dear Editor   As a citizen in the South Ruimveldt Gardens Community, this letter is written to raise two issues. Firstly, more than one and a half years ago, the David Rose Street (now a dam) and Caneview Avenue, South Ruimveldt Gardens, were used by the Government’s contractor Junior Sammy […]