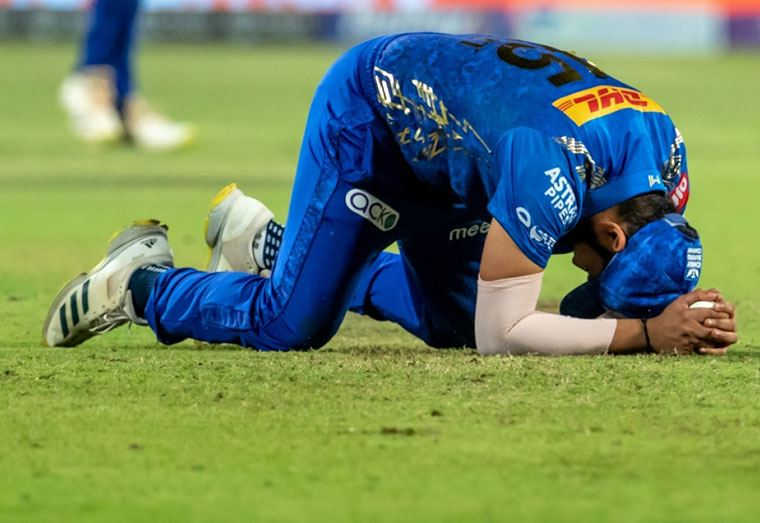 (CRICINFO) Back in 2011, Mumbai Indians had an exception made to allow them to field five overseas players in the Champions League T20. Now, a poor start to IPL 2022 has pushed them in the opposite direction, leading them to pick just two overseas players for their match against Royal Challengers Bangalore in Pune.

It didn’t work, and a middle-overs meltdown left Mumbai winless after four games, leaving them bottom of the table alongside fierce rivals and fellow sufferers Chennai Super Kings, who have an identical record and a slightly worse net run rate.

Royal Challengers’ bowlers, led by Wanindu Hasaranga and Harshal Patel, triggered that meltdown, and their batters were left chasing only 152. Mumbai might have struggled to set even that target if not for an unbeaten, situation-defying 37-ball 68 from Suryakumar Yadav.

The calm
The start of this match gave no clue as to how it would proceed. There was a green tinge on the pitch, and the new ball moved around initially, but once the shine disappeared, the ball pinged nicely off the bats of Rohit Sharma and Ishan Kishan. From 6 for no loss after two overs, Mumbai raced to 49 for no loss at the end of the powerplay.

The storm
Harshal gave Royal Challengers the breakthrough they craved in the seventh over, having Rohit caught and bowled when the Mumbai captain was early on a flick. That was the start of a dramatic slump, as Mumbai lost six wickets for 29 runs.

The bowling was responsible for this, chiefly Harshal’s dipping offcutters, Akash Deep’s hard lengths, and Hasaranga’s wrong’un, which deceived Dewald Brevis and Kieron Pollard, both left leaden-footed and plumb lbw, playing all around the ball.

And Mumbai’s situation seemed to induce a sense of panic too. Tilak Varma, who has made such a bright start to his IPL career, was run-out going for a needless quick single, taking on the fleet-footed Maxwell with predictable consequences.

The parallel universe
No other batter looked comfortable through the middle overs, but if there was anything two-paced about this pitch, it wasn’t affecting Suryakumar, who middled his shots from the get go. A back-foot punch off Akash gave early warning of his form, and two overs later he stepped out and away from the line to launch Shahbaz Ahmed inside-out for six.

Jaydev Unadkat, playing his first match for Mumbai, gave steadfast support and got the best seat in the house to watch Suryakumar’s strokeplay. He hit six sixes, including a slog-sweep off Hasaranga and a pick-up flick off Mohammed Siraj that flew into the back rows beyond the leg-side boundary. But the best of them just cleared the ropes. Aware that Suryakumar was standing deep in his crease with an open stance to allow him to access the leg side off anything remotely straight, Siraj went full and wide, forcing him to reach for the ball. He did this, and he somehow made sweet contact with an open bat-face to slice the ball over the third man boundary.

A brilliant last over from Harshal, who was getting his slower ball to dip and grip and behave unpredictably, went for just seven despite a last-ball full-toss muscled for the last of Suryakumar’s sixes. Royal Challengers needed just 152 to win.

Rawat and Faf make slow start
Mumbai knew they needed early wickets to have any chance. Accordingly, they threw everything they had at Royal Challengers in the early overs, using Jasprit Bumrah for two overs out of the first six. Royal Challengers hit just two boundaries in the powerplay, back-to-back sixes from Rawat dancing down the track to Unadkat.

Faf du Plessis went at a slow pace, scoring just 16 off 22 before holing out to an Unadkat slower ball in the ninth over. By then, he and Rawat had put on the third-slowest fifty opening stand in IPL history.

Kohli gives RCB impetus
Royal Challengers still only needed eight-and-a-half runs an over at that point, and Kohli, walking in at No. 3, immediately began finding the boundary even as Unadkat and Pollard got their cutters to stick in the pitch. Kohli stepped out and made room to flay Pollard through point, and stepped out in the next over to whip M Ashwin against the turn, wide of long-on.

Basil Thampi sent down a 15-run 12th over, easing any residual pressure Royal Challengers may have felt. This over included the shot of the innings, an effortless flicked six that showcased Rawat’s balance and timing.

Mumbai’s last hopes resided in the frame of Bumrah, who came on with 60 needed off 42. Kohli shut the door on those hopes in a moment that seemed symbolic, judging the length of a Bumrah bouncer instantly and swatting it between long-on and deep midwicket. When Brevis put down the simplest of catches at deep square leg to reprieve Kohli in the next over, the game was all but up.

Rawat hurried Royal Challengers towards their target with two more sixes, a pull off Pollard in the 16th over and a charging slog off Unadkat in the 17th. With just 23 needed off 20, though, Rawat was run out by a direct hit from the debutant Ramandeep Singh while responding to Kohli’s call for a quick second. Then Brevis, brought on to bowl his legspin for the first time in the IPL, had Kohli lbw with just eight runs to get. It gave the crowd at the MCA Stadium – whose chants suggested it was mostly Royal Challengers-supporting – a brief and satisfying glimpse of Maxwell at the crease.

Sun Apr 10 , 2022
Support Village Voice News With a Donation of Your Choice. (BBC SPORT) Chelsea put a terrible week behind them to return to winning ways in devastating style with a six-goal demolition of Southampton.  Having been beaten 4-1 at home to Brentford in the Premier League and then suffering a 3-1 defeat to Real Madrid, Chelsea bounced back in a manner […] 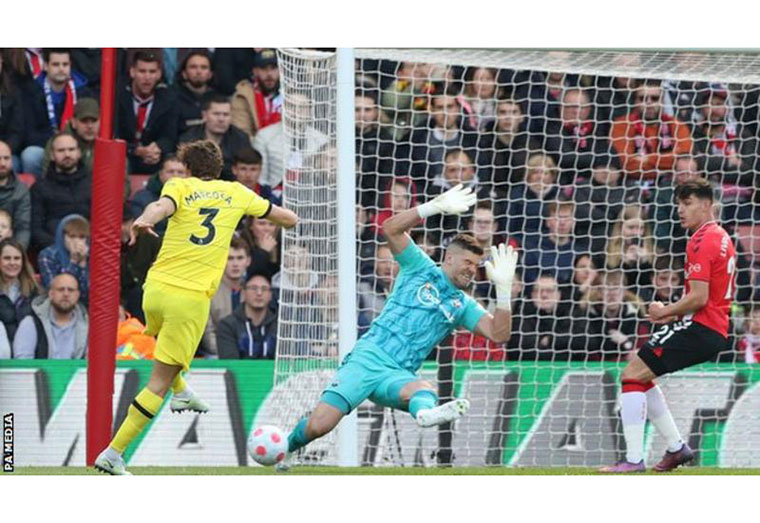