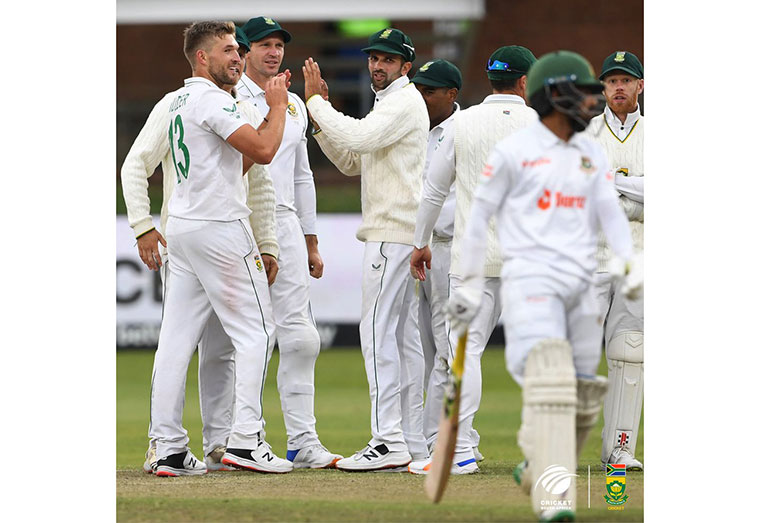 —-Visitors ends second day on 139 for 5 in their first innings, still 314 in arrears

(CRICINFO) Wiaan Mulder and Duanne Olivier put South Africa in full control of the second Test, being played in Gqeberha, as they reduced Bangladesh to 139 for 5 in their first innings by stumps on the second day. Mulder removed three left-hand batters, trapping them lbw in similar fashion, while Olivier took the first and the fifth wickets to fall.

It was far from ideal for Bangladesh, who were replying to South Africa’s formidable first-innings total of 453, boosted by Keshav Maharaj’s career-best 84. That added to the fifties Dean Elgar, Keegan Petersen and Temba Bavuma had all scored on the first day. For Bangladesh, Taijul Islam took six wickets, which took him to 150 career Test wickets, and Khaled Ahmed picked up three.

But South Africa’s bowling in the late afternoon session made it their day all the way. Olivier had Mahmudul Hasan Joy caught at first slip for a duck in the first over, but Bangladesh got over this early blow with a flurry of boundaries. Tamim Iqbal kicked things off with a booming straight drive, before Najmul Hossain Shanto got into the act with one past point. Tamim slammed Lizaad Williams for five more fours as the pair added 79 runs for the second wicket.

Tamim, however, became Mulder’s first victim when the quick got one to cut back into him and Tamim, who has a tendency of falling over to incoming deliveries on the angle, was defeated for 47, in his first Test innings in nearly a year. In Mulder’s next over, a banged-in inducker struck Najmul in front, but he was given not out. South Africa reviewed. It was hitting middle stump, which meant the batter was gone for 33.

Mominul Haque continued his poor run in the Test series, when he was also trapped by Mulder for 6, and when Olivier removed Litton Das with another incoming delivery, it completed four consecutive dismissals with startling similarities. Mushfiqur Rahim, who has scored 30 in 55 balls, and Yasir Ali, on 8, saw out the day. Earlier, South Africa, who started the day on 278 for 5 and were perhaps looking at a score of around 350, got many more thanks to Maharaj’s effervescence. Maharaj started off by attacking Ebadot Hossain, before quickly dispatching Taijul for 12 in his first over, including a six over midwicket. He hit both the main spinner, Taijul and Mehidy Hasan Miraz, with disdain, and also timed the ball well against pace. He struck three sixes in all, the third taking him to a run-a-ball fifty.

He really turned it on after lunch, when he hit a series of pulls and drives between cover and point off the back foot like a proper No. 3 might have. Maharaj got into the 80s with a streaky boundary, before Taijul got him for 84 when he attempted an ungainly slog. It was a rare shot from the No. 8, who had batted with great composure for most of his innings. Maharaj added 80 for the seventh wicket with Mulder, who looked to bat within himself for much of his 33 off 77 balls. Maharaj also added 38 runs for the eighth wicket with Simon Harmer, who then added 35 for the ninth wicket with Williams.

Sun Apr 10 , 2022
Support Village Voice News With a Donation of Your Choice. RALEIGH, N.C. (AP) — When Ted Budd won a surprise endorsement from former President Donald Trump last year, he was a little-known congressman running for a Senate seat in North Carolina against some of the state’s most recognizable Republicans, including a former governor. As he enters the final stretch before […] 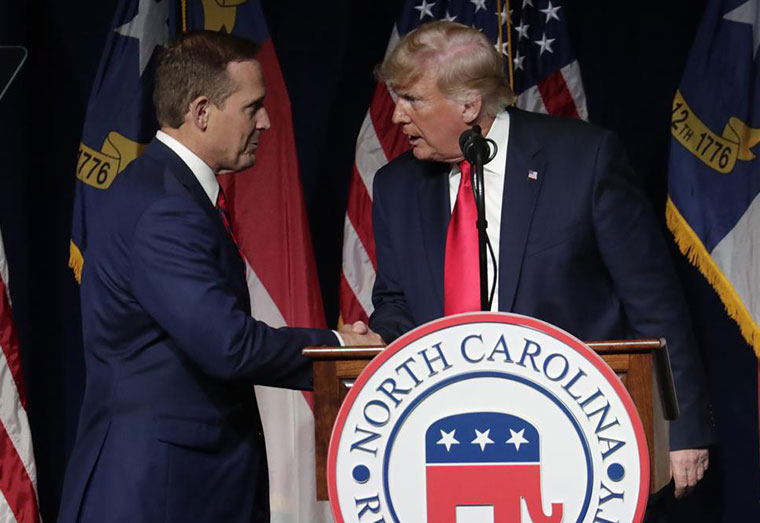