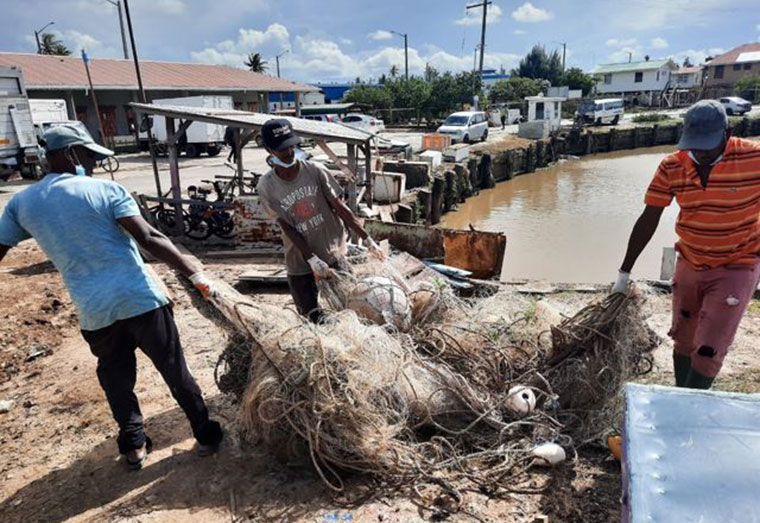 Several fishermen operating on the Atlantic off the coast of Region 5 (Mahaica/Berbice) are complaining of increasing incidents in recent weeks of extensive damage to their seines by trawlers which leave their designated areas and illegally move into to shallower waters reserved for small scale fishing.

They told Village Voice that they have in recent months made complaints to the Fisheries Department of the Ministry of Agriculture about these destructive incursions by trawlers but are yet to see any decisive action in curbing them.

Mr R. Mohamed a boat owner told Village Voice: “This type of incident increasing now. More and more small fishermen are being hard hit. We want to see the Fisheries Department taking effective action in curbing it and giving us in the artisanal section of marine fishing the protection and badly needed encouragement to continue.”

“We also want to see prompt settlements for the victims of these lawless trawler operations. These small fishermen are mainly poor people. Right now many of these people are suffering,” he said.

Mohamed was supported in his complaints by a number of fellow fishermen and boat owners who had lost fishing nets valued hundreds of thousands of dollars due to damage by trawlers in recent week. The fisherfolk spoken to are those who operate from the Three Door Sluice at D’Edward Village West Bank Berbice.

D’Edward is located about a mile west of Rosignol on the West Bank of the Berbice River. Ms. Bibi Zena Mohamed whose boat operates, or rather operated, from the Three Door sluice at D Edward told this publication that she lost seven bundles of seine valued at over $800,000 on the night of December 10th last.

“Me Captain tell me that that night rain fall heavy. He said they see the trawler approaching. They make signals to the trawler but there was no response. The trawler knock them around 11PM and drag the seine away.”

She said that at the time her boat was operating in water at a depth of between 7 and 8 fathoms well within the boundaries reserved for the vessel.

Ms Mohamed said that the Minister of Agriculture had promised to help her recover and she was waiting but was getting desperate for the promised assistance since she had invested heavily in the boat and seines and was now hard pressed to maintain her self and family.

Yet another fisherman from Three Door Sluice, Mr. Stephen Victor reported losing three and a half bundles of seine on the same night of December 10th last.

He said: “Is probably the same trawler that hit Zena seine.. The trawler mash up me seine while me boat was in seven and half fathoms water. Over $300,000 worth of seine them drag away with them. Them never look back”

Yet another Three Door sluice fisherman known as Shazad reported that he had lost seven seines valued close to a million dollars due to trawler damage while his boat was operating on the Atlantic well under the twelve fathoms reserved for artisanal fishing.

Village Voice News heard reports of another three-door sluice fisherman who reported to the Three Door Sluice Coop that he had lost seines to trawlers a little over two weeks ago.

This guy is popularly known as Mullet..

Speaking about his own experience: Rahoof Mohamed said that on February 1 this year his fishing boat lost twelve hundred pounds seven and half inch polythene seine to damage by a trawler operating well below its designated zone.

The damage to his seines occurred at a depth of seven fathoms of water way below the twelve fathoms depth within which trawlers are supposed to operate.

Mr. Mohamed said that last year August he lost 500 pounds of seine to another trawler operating outside its designated area.

He added: “The matter last year I reported to the Fisheries Department. Nothing ent come out of it as yet.”

He said that fishermen had reported instances of damage to their nets in broad daylight.

“Some trawlers on their way to their fishing grounds higher up, steer away from nets; others just drive through the nets, entangling them and pulling them away”

He said: “ This is the pattern of destruction: We throw seine mainly in the night. The trawlers come in the shallow water, till in the corner to catch shrimp; the trawler cuts the fishing boat seine ; the trawler pull the seine and carry it away ; you ent know where they gone with it.”

Other fishermen names were mentioned as victims of these events but were at the time not available for comment.

Village Voice recently reported on a similar event affecting a fisherman at the Abary sluice also in Region 5 on December 9th last.

One fisherman who requested anonymity said: “Some of them trawler men ent care about zoning. If shrimps dey near the seashore in two fathoms water, , they ent care they coming to get them.”

Mr. Mohamed and the others spoken to deplored the slow pace of investigations into these incidents by the Department of Fisheries.

In an invited comment Chairperson of the Three Door Sluice Cooperative Society Mrs. Bhanmattie Vanbrook said that the Society was sympathetic to the members who had been hard hit by the infractions by trawler captains.

“We are aware of these incidents and they are a matter of concern.”.

She said that the Coop was following up on the progress being made on investigations into these incidents and would be happy if the issues in the sector can be resolved in a very final way.

Mrs Vanbrook stressed: “This whole business of our artisanals being victims of lawless trawler crews is not fair to them.

Sun Feb 13 , 2022
Support Village Voice News With a Donation of Your Choice. Dear Editor, Having listened to the portion of Mr. Jagdeo’s interview with Vice News, during which he spoke to Indigenous Guyanese issues. He said the following among other things: “When we assumed office in 1992 Indigenous People had titled lands, about 6%. By the time we left office in 2015 […]