A 19-year-old East La Penitence teen, who was stabbed by his stepfather while he was trying to save his mother, succumbed to his stab wounds on Thursday.

The Guyana Police Force, in a statement on Thursday, said Edwards was stabbed to his right hip at around 18:30 hours on Wednesday, January 26, allegedly by his stepfather.

The teen succumbed at the Covid Centre, Liliendaal on Thursday.

According to the police, Edwards intervened when his stepfather began to abuse his mother who had not finished cooking.

The suspect reportedly became angry and picked up a knife and attacked the two. The teen and his mother were both wounded after which the suspect fled the scene.

Edwards and his mother were rushed to the Georgetown Public Hospital by relatives. There, the two were tested for COVID-19, and it was revealed that the teen was positive.

As such he was transferred to the Infectious Diseases Hospital at Liliendaal where he subsequently died. His body is presently at the Memorial Gardens Funeral Home awaiting a PME.

His mother is presently hospitalised in a stable condition.

Corporal Henry and other ranks from CID Headquarters are investigating. The suspect has not yet been apprehended.

Fri Jan 28 , 2022
Support Village Voice News With a Donation of Your Choice. A policeman was killed after his car slammed into a parked truck at Mocha, East Bank Demerara Thursday evening. Dead is police constable 23012 Faustin Magloire age 27 years of Perseverance Housing Scheme, East Bank Demerara. He was stationed at the North Ruimveldt Police Outpost and attached to the General […] 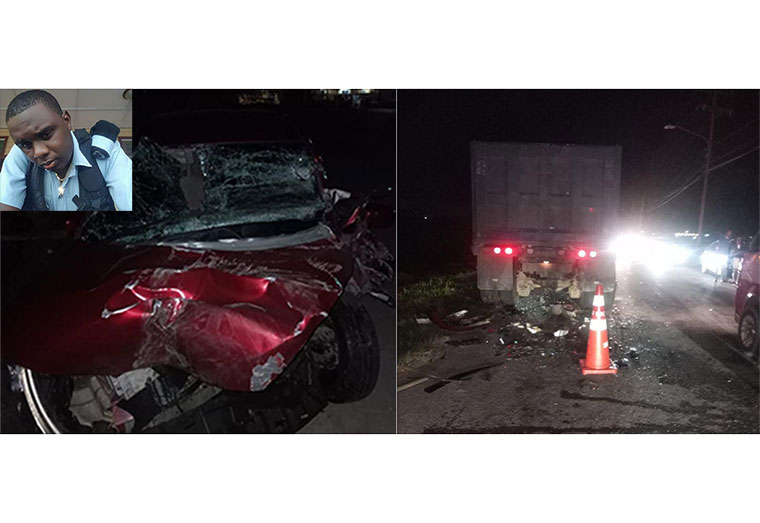