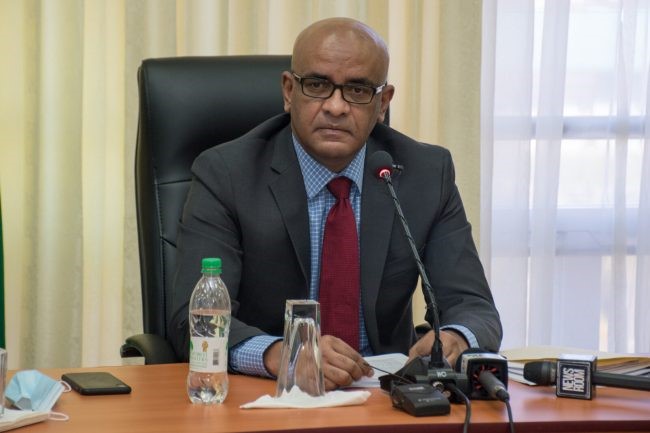 True to what the opposition had predicted, Vice President Bharrat Jagdeo said Budget 2022 will be financed partly by Guyana’s oil revenues.

This will be Guyana’s first withdrawal from the Natural Resource Fund (NRF) since Guyana started collecting oil revenues in early 2020.

In an virtual interview with National Communications Network (NCN), Jagdeo said the oil revenues will reduce Guyana’s reliance on borrowing, the Department of Public Information reported him saying.
“The fiscal deficit this year, in this budget, would be lower than the fiscal deficit in last year, because from a financing perspective, that means we’d have to borrow less because some of the oil and gas revenue will go to replace the high level of borrowing that we have had,” Jagdeo said.

He said that Guyana is spending more now on big capital projects, and as they come on stream, the fiscal deficit may widen. However, because oil revenues will help to address the deficit, financing needs will be reduced.

As some have criticised the government’s decision to make early withdrawals from the Fund, the government has emphasised that it is better to use Guyana’s own resources, instead of continuing to build up debt unsustainably.

A significant part of the borrowing, Jagdeo said, started with the previous government – “$90 billion a year was coming from the domestic market!”

As this will not happen to such a degree, Jagdeo said that more funds will be left in the domestic market for private sector lending.

Fortunately for locals, the government expects this to have a favourable effect on interest rates. He said banks will have to be a bit more aggressive to seek out people to lend to, because they do not have so much ease of lending to the government.

This, the Vice President said, is part of the government’s strategy to deliver an element of sustainability in finances.

More positive impacts are to be expected from the use of Guyana’s oil revenues, as government has said it will spend from the Fund to make people’s live easier.

Currently, US$607 million sits in the Fund. While the withdrawal rule restricts withdrawals from the Fund to deposits made in the previous fiscal year, the first schedule of the Natural Resource Fund Act 2021 allows an exception in the first year, giving the government the latitude to withdraw the total balance in the Fund at once.

The Ministry of Finance has said that such a withdrawal is pertinent to address Guyana’s pressing development needs.

OP-ED | I call on Mr. Granger to do the honourable thing and step aside

Sun Jan 23 , 2022
Support Village Voice News With a Donation of Your Choice. By GHK Lall I have arrived at a place of deep disappointment.  I waited for, and hoped that, some decency would take hold, and that I would be spared the pain of having to take matters to another level, a place where I didn’t want to go.  One that required […]